Samorst 2 is a puzzle game by Amnanita Design and released in 2005 for Windows and Linux. You continue the adventures of the little gnome, this time he must rescue his poor little dog who has been captured by aliens. You’ll travel to different worlds in order to bring him home.

Samorost 2 is a point-and-click adventure game and all controls are made with the mouse. There are 7 levels to navigate, each of them with an individual code so you can start the game where you left off. I will include the level codes in the walkthrough below.

Click on the gnome to get out of the rocket ship. You will get caught in the tree. Click on the bug and put it on top of the tree that has caught you. The tree will release you. 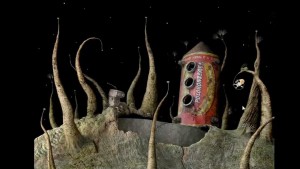 Walk over to the west. You’ll see a strange little house. Click on the door to go inside. Take the cork from the top of the middle glass jar. Turn the crank on the right to make the right chimney lean further to the right. 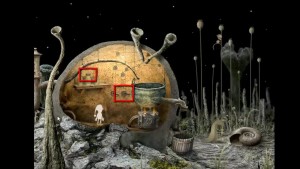 Scroll the screen to the left until you see the two little creatures sitting on a log pipe. Click on the baby one to make him fall off. When he  falls off and the big one turns around to pick him up click on the hole in the log to stop it up with the cork. The big creature will try to drink but won’t be able to.

Scroll to the left again and pull the lever twice to pump water into the pot. Click on the fire to heat it up. Turn the tap outside of the house to fill up the bucket. The snail will take a drink and fall asleep. Pick up the axe. The gnome will go and hit the robot with the axe and climb down the ladder into the alien base. 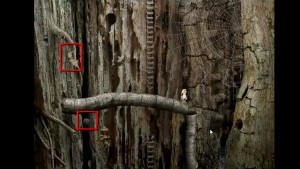 Walk over the pipe to the right until part of the pipe breaks revealing a hole in the wall to the right. Click on the small boulder, shown in the pic above so that the bugs can climb up past it. When a bug is directly next to the sleeping cat creature click on the cat to have it eat the bug. The cat will spit out the remains.

A fly will land on the remains. Click on the gnome to have him jump up and down. The fly will fly away and land in the spider web. A spider will wrap it up and hang it below the web. Click on the tied up fly to swing across and into the hole.

You’ll drop down into a room with a large fridge. Click on the fridge to open it and let a rat out. The fridge is not powered. You’ll need to find a double-adapter to power both the fridge and the light.

Enter the hole to the right. There’s a little alien at work. 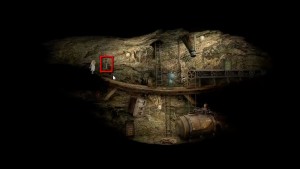 Just as you enter there’s a little torch hanging up. Grab it and go back to the fridge. 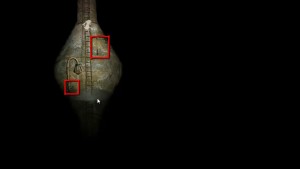 Pull the chain on the right. When the water is lowered quickly turn the tap to turn off the water. Pull the chain again to drain the water completely. Now turn the wheel at the bottom left to open the little door and go inside.

You will come to another chamber. Align the three little wheels so that the red marks are straight up and down. Then turn the large wheel. This will unplug the chamber and drain the water. Click on the opening to the top right to climb up the ladder over to it. This will bring to the room where the alien is working but on the lower level.

Inside you’ll see a little machine with a coin slot and two buttons labelled one and two. Put the coin in the slot and press the button marked 1. A robot will come out with a spanner. Grab the spanner and use it on the three small bolts. 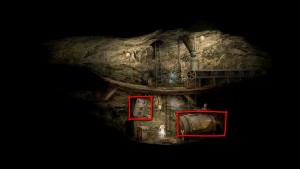 Give the spanner back to the robot and take the coin out of the slot. Place the coin in the slot once more and press the button marked 2. Grab the big spanner and use it on the big bolt. The front of the machine will fall off. Click on the belt to pull it off and stop the elevator above from working. The alien will come down and you’ll hop back through the tunnel all the way to the top part of the room.

The alien will eat you and then spit you out. He’ll push a button on the armrest to grab you with some kind of slime. Your dog is here, trapped in a little while chasing a bone on a string. 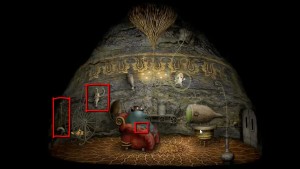 First, grab the bone on a string and put it on the skull on the other side of the wheel. The dog will start running the other way which will turn the fan the other way. The alien’s hat will start flying off. When he reaches up to grab it click the button on the armrest.

You’ll be free but not for long. Before the alien is able to trap you again click on the chair to push it forwards. When the alien tries to trap you he will trap himself.

Pick up the key that the fat alien drops and rescue your poor little dog. Click on the button next to the door on the right to escape. You will launch your rocket and start flying home. Unfortunately you run out of fuel and land on a foreign planet.

After landing on a new planet your parachute will be caught on a pole. Click on the parachute with the dog underneath it to bring him out. Click on the pole and the dog will start pushing it. Near the end of the second push click on the gnome and he will swing free. You need to get the timing just right so expect it to take 5 or 6 tries before your get free. 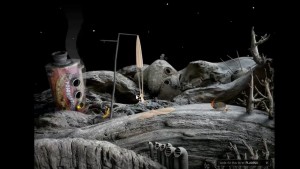 Click on the man and he’ll tell you he wants his pipe. Take one of the bells from  his hat and put it on the branch to the left of the bird. The bird will go and pick it up . While the bird is away from the next click on the nest to tip it over. Grab the pipe and give it to the man.

Click on the man and he’ll point downwards saying he wants his pouch. Click on the hole at the bottom of the tree stump to send the dog into the hole. There’s a badger down here who won’t let the dog past.

Click on the small pool of water and then the mushroom half way down the tunnel towards the badger. The dog will wee on the mushroom, making it grow. Continue doing this until the mushroom grows high enough to light up a bone in a small cave. 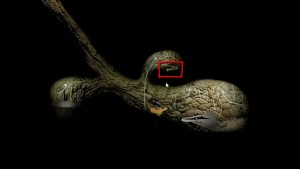 Give the bone to the badger and then click on the pouch hidden in the straw. Pick up the pouch. Give the pouch to the man. The man will release a firefly to light his pipe. Click on the firefly and it will lead the way out of the forest.

Here you will see a space taxi with a sleeping taxi driver next to a lighthouse. To wake up the taxi driver go inside the lighthouse and open the cupboard. Grab the coffee and put it in the kettle. Turn the tap to fill it with water.

Grab the kettle and place it on the flame at the top of the lighthouse. Pull the string on the left to ring the bell. When the driver opens his mouth pour in the coffee.

Next we need to fuel the taxi. Grab the deflated balloon on top of the pump. Location shown below. 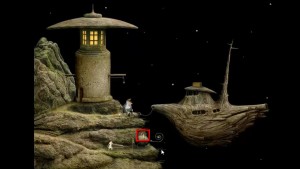 Walk up the mountain to a new area. Grab a reed and tickle the sleeping seal with it. The fork will fall into the barrel of food. Click on the pipe next to the pump to place the balloon on it. We need to fill it with methane from the seals. Use the fork to feed the seals. When one of them eats use the two starfish taps to line up the tap with the seal. When it farts use the pump to fill up the balloon! 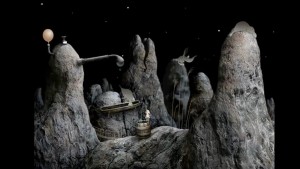 Place the balloon back on the pump near to the taxi. Use the pump to fill it up with the gas from the balloon. Walk over to the back of the taxi and then click on the gnome to have him jump up and down to push the taxi lower. Use the bellows to fill the taxi with the gas. 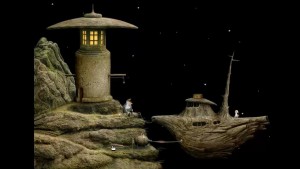 Lastly, ring the bell and everyone will hop aboard. The taxi will take you back to your home planet.

That’s all for Samorost 2! For more adventure games check out Samorst 3 and Day of the Tentacle Remastered.