Korriban is home to the Sith Academy and is the place where you’ll find the last Star Map. You’ll need to find a way to be accepted into the Academy so you can continue the search for the Star Map. 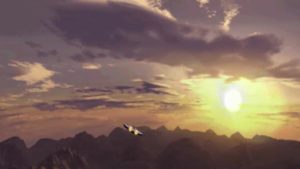 Korriban is home to the Sith Academy and in order to find the Star Map you’ll need to pose as a Sith student. Once you exit the port the Port Authority will demand credits as normal. Either persuade him or pay the docking fee to get past.

When you enter you’ll see Master Shaardan teasing some prospective students. He asks you what should be done with them. If you can’t persuade him otherwise he’ll kill them. Further down you’ll meet Lashowe and some other Sith recruits who will give you a not-so-warm welcome.

Exit from the Dreshdae Settlement and go towards the Sith Academy. There are those wanting to become Sith standing outside. Try to convince them to go home. Talk to the Sith Academy Guard and he’ll tell you that to enter you need a Sith Medallion. Only Master Yuthura at the Cantina can let you in.

Head back to the Cantina and speak with Master Yuthura. She may or may not let you into the Academy right away, depending on how convincing you are.

Walk out of the Cantina and turn right to go back up the corridor. You’ll run into some Sith Thugs who have just been accepted into the Academy.  Kill them and search their bodies. One of them will drop the Sith Medallion. Further along another Sith recruit is killing people. Stand up for them and take him down. He drops another Sith Medallion.

Go back to Yuthura in the Cantina and tell her you have a Medallion and that you want to enter the Academy. Now convinced that you are Sith material she’ll let you in to the Sith Academy for training.

There are a number of ways to gain prestige within the Sith Academy and you’ll need to complete various tasks before you will be accepted as a full member of the Sith. Listed below are the ways of gaining prestige. You won’t need to complete all of them.

The Sith Code – Speak with Yuthura about the Sith code and she’ll tell it to you. Go back to Uthar and let him know you’re ready for the test. Here’s the code:

Peace is a lie. There is only passion.
Through passion, I gain strength.
Through strength, I gain power.
Through power, I gain victory.
Through victory my chains are broken.

Once you’ve passed this part of the test you’ll be asked one more question to make sure you understand the code.

Lashowe – Yuthura hints that betraying one of the other students would be a way to gain prestige. When you find Lashowe try to get on her good side and agree to help her find the Holocron. When you go into the valley to the far north you’ll find Lashowe again. Fight the beast with her and she’ll take the Holocron. She’ll claim that she’ll give you credit but she won’t. Either fight her for the Holocron for dark side points and prestige or let her go for light side points.

Renegade Sith – Some Sith have tried to escape and are hiding in the Shylack Caves. Enter the caves just outside of the Sith Academy and find the students. Agree to let them escape by killing the Tarentatek on the other side of the bridge to the east. Go back and let them know the way is clear. Head back into the Academy and tell Uthar that the students have been ‘killed’ for prestige.

Tomb of Marka Ragnos – When you enter the valley of the runes the first tomb on the left is the Tomb of Marka Ragnos. Check the corpse on the ground for the Sound Dampening Stealth Unit and equip it. Once you reach the room at the end of the corridor you’ll meet a Rogue Droid.

To help the droid you’ll need to switch off his killer instincts. To do so you need to disable his systems in the following order:

If you’re able to do this you’ll free the droid. Otherwise you’ll have to kill him and his droid friends. Either way head back to Uthar and tell him the droid has been dealt with for more prestige points.

Ajunta Pall’s Sword – The first tomb on the right as you enter the valley is the Tomb of Ajunta Pall. Walk down the corridor to the east until you reach the bridge. A pillar stands in your way as you try to cross. Place a Frag Grenade in the pillar and run across as the droids start firing. Pull the lever on the other side to make the droids self destruct.

Continue to the east to find the Tomb and Sarcophagus of Ajunta Pall. Inside are three swords. You’ll need to place one of these swords in the statue to find the right one but which one is the right one? Click on the statue and a Sith Ghost will talk to you.  He’ll tell you the sword is the one that ‘hearkens night and silences the light’. The Notched Steel Sword has the symbol of a dark circle on it. This is the one you want to place in the statue. As you leave Shaardan will try to steal the sword from you. Take him out and then return to Uthar with the true sword for more prestige.

Tomb of Tulak Hord – The last tomb on the right is the Tomb of Tulak Hord. Walk east and then follow the north path around to the east. Use the Ancient Console to open the door and go through. Your part will be knocked unconscious with a nerve toxin and once you wake up Jorak Uln, the previous master of the Academy, will be questioning you. Mekel has also been captured.

Jorak Uln will ask you questions and torture you if you get them wrong and torture Mekel if you get them right. If you want to save Mekel answer all the questions wrong (according to the light side) and only you will be tortured but you’re strong enough to handle it. At the end you’ll get a chance to fight Jorak. Search Jorak’s remains and take the Ancient Sith Tablet that you can take back to Uthar for prestige points.

After completing a certain number of Prestige Quests above you’ll be given access to the Tomb of Naga Sadow. You’ll be alone for this task. Enter the door south and then go to the intersection.

To the west you’ll have to face two Terentateks. To the south is the acid pool that you can’t cross yet and to the east are the Three Pillars.

Head to the east first of all. Use the computer to transfer the four systems on the left pillar over to the right. Each system has certain requirements that must be met before it can be moved. Here’s how you do it: 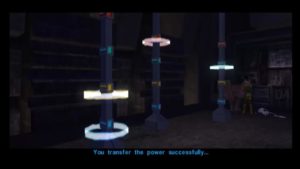 Go through the door and look at the Monument to Naga Sadow and take Naga Sadow’s Poison Blade. Go back to the intersection and continue west. Use whatever buffs you need to take down the two Terentatek. You can lay a few mines before they get to you to weaken them first.

Speak with Yuthura and she’ll mention her plans to overthrow Master Uthar and become the new leader of the Sith Academy. If you agree to go along with it the two of you will attack Uthar when the time is right. Otherwise you might need to face both of them alone. The other option is to tell Uthar about Yuthura and pit them against one another. Either way you’ll need to take both of them down once you’ve found the Star Map.

Just outside the Cantina you’ll meet Lurze Kesh. He tells you about some spice hidden on the Ebon Hawk and gives you the code to access it. Go back to the Ebon Hawk’s cargo hold and click on the compartment in the wall. Use the code RED-47 to open it and take out the spice.  Bring it back to Lurze for some credits. Lurze will have another job for you if want to earn even more credits.

In the Sith Academy you’ll find a torture chamber where a Sith is trying to interrogate a prisoner for the location of Mandalorian weapons. Agree to take over the process and speak with the prisoner. Convince him that you want to help and he’ll suggest using the computer to put him into a catatonic state. He can survive like this for long periods of time and escape when he’s thrown out of the Academy. Use the computer and select the option to put him into a catatonic state for light side points.