Once you escape the planet Taris you’ll be taken to Dantooine where the Jedi enclave is located. The Jedi council will ask to see you. Follow Bastila into the Jedi Chambers. Carth will meet you outside the chambers and point the way.

At this stage just go along with everything they say. You’ll eventually go back to the Ebon Hawk and have another dream with Bastila. Go back to the Jedi Chambers and talk to them again. The dream seams to indicate that bastila is to be your Jedi teacher. 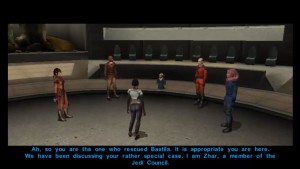 You’ll eventually be allowed to go through the training to become a Padawan but you’ll need to pass three tests before you’re accepted.

In order to become a Padawan you need to understand the teachings of the Jedi. You’ll be tested on the Jedi Code. You can ask just about anyone here about the Jedi Code and they’ll recite it for you. It goes something like this.

There is no emotion; there is peace.

There is no ignorance; there is knowledge.

There is no passion; there is serenity.

There is no chaos; there is harmony.

There is no death; there is the force.

Head back to the Jedi Council and speak with Master Dorak. He’ll tell you about the different lightsabers and how they are suited to different kinds of Jedi. Master Dorak will ask you a series of questions to determine you personality. It doesn’t really matter what you answer here as you’ll be able to select the color lightsaber that you want anyway.

Go back to Master Zhar and assemble the lightsaber. That’s it for the second quest! Master Zhar will tell you about the corruption in the grove but they Jedi have little advice for you on this quest.

Third Quest: Corruption in the Grove

If you haven’t been out of the Jedi area yet now’s the time to explore the surrounding countryside. Speak with the droid to the east of the tree in the central area and ask to be let out.

In the courtyard you’ll come across Jon whose daughter was apparently killed by a Mandolorian. This is a side quest that you can complete now or later. There are a few others who you can talk to but for now, such as the Rodian with his small shop but for now we’ll focus on the main quest. If you want some maps you can buy them for 2 credits each from the Rodian.

Walk east and to the south. Keep a watch out for Kath Hounds. These beasts are quite aggressive but fairly easy to deal with. Just make sure they don’t team up on one of your characters and you should be fine. Keep heading to the east and south until you come across the Matale Grounds. The corrupted grove is to the south of this area.

Juhani is also training as a Jedi and she’ll instantly stun the two other members of your party. You have to fight her alone. Using Bastila’s light saber might make this fight a little easier as it’s two-bladed.

“Who are you?”
“You embrace the dark side? Why?”
“You sley Quatra, your master?”
“I was sent by the Council to cleanse the taint from this grove.”
“I do not hold anger torwards you, Juhani. I wish you peace.”
“The first step on the path of true knowledge is knowing that you are
ignorant.”
“Even in death, the Force will allow her to live on.”
“Anger? Show them that you have freed yourself of this base passion.”
“Your inner peace and harmony will show them your sincerity.”

If you’re not successful on your first attempt you can come back here later and try again. You won’t be able to progress with the main story until she has either returned to the Jedi Council or has been killed.

There’s one more main quest but we’ll get back to that after completing the side quests.

There are a number of side quests on Dantooine that you can choose to complete or not. I suggest completing these before going to the ruins in the east which is the last main quest for this planet.

Just outside of the Jedi Enclave you’ll meet someone called Jon whose upset about the Mandalorians in the area because they took one of his family. He offers to pay you for ridding Dantooine of the Mandalorinas. There are three groups of Mandalorians on Dantooine. You may have already run into them while trying to find Juhani in the Grove.

The first group is towards the center of the map with the Grove in it. The second group is to the west of the Matale mansion and the third is in the southern area with the Sandral Grounds. The Mandalorians can be tough to defeat so make sure you take your best fighting warriors with you.

Once you have defeated all three groups head back to the map with the Grove and go to the center. Here you’ll find the Mandalorian leader, Sherruk. Taking out Sherruk is actually pretty difficult and he claims to have defeated many Jedi.

Have one of your members with great defence and lots of health go up against sherruk. You may want to buff your characters with Battle, Stamina or Strength stimulants to help you out. Throw a few grenades at the less equipped enemies to stop them firing lasers at you. You may want use your shields before entering battle to soak up some of the rifle fire.

When Sherruk is dead search the body for items including a light saber. Return to Jon outside the Jedi Enclave for your reward of 1,000 or 2,000 credits. If you refuse to take a reward you’ll be given light side points.

This is a fairly simple quest but you need to locate the body. You can find the remains of the dead settler to the east side of the Matale Grounds. His name is Casus and is the son of Nurik Sandral. Go back to the Sandral Estate and speak with Nurik to finish the quest. He won’t believe that he was killed by Kath Hounds but at least you have reported to him what you’ve discovered.

The Sandrals and Matales hate each other, at least the parents do. When you complete the third Jedi Trial Ahlan Matale will burst in demanding that the Jedi intervene. The council will give you the option of intervening in this case.

Head over to the Sandral Estate and talk to the droid standing guard out the front. Tell him the Jedi Council has asked you to come and you’ll be let in. Nurik Sandral won’t have much to say to you but once he’s left his daughter, Rahasia, will come out and tell you to enter in through the side entrance.

Go outside the Estate to the side door and enter. Explore this area and kill all the droids that attack. They’re pretty easy to deal with. You may find Shen or Rahasia first. If you find Shen he’ll tell you that he won’t leave without Rahasia. If you meet Rahasia she’ll show you where Shen is being held on the map.

The two will leave together but will be caught by Ahlen and Nurik. These two have an argument and the two lovers will be free to leave. You can influence the families to the dark side by insisting that they fight over it or try to make peace between them by saying they should let the children decide for themselves.

Elise, outside the Jedi Enclave is missing her companion. After talking to her you figure out she’s actually lost her droid which is a replacement for her husband.

The droid can be found to the east side of the Sandral Grounds map and he’s being attacked by Kath Hounds. Kill the Hounds and talk with the droid.

There are no light side points to be gained here, only dark side points if you kill the droid and then tell Elise that you weren’t able to find him.

After performing the trials the Jedi Council will tell you about a Crystal Cave where crystals used in light sabers can be found. To find the cave head to the very east side of the map where the Sandral Grounds are located.

Inside the cave you’ll find Kinrath Spiders. Kill them and then take the crystals. There are various crystals to find. Make sure you bash open all of the eggs for even more crystals. These can be used in light sabers or sold for a profit.

This is part of the main quest. The Star Forge Map can be found in the Ancient Ruins to the east of the Jedi Enclave. You will only get this quest once you have been promoted to a Padawan.

Enter into the Ruins and go south through another door. Here there’s a droid who seems to be left here to give information to travellers. He tells you others have been in here, Malak and Revan, of course. When you are finished talking to him make sure you loot the body of Nemo and then head through either the West or East doors.

West Door – Inside this room guarding the ancient terminal is a Guardian Droid. It’s pretty tough to defeat so make sure you have one of your characters wielding an ion rifle or something similar. Once it’s been defeated use the terminal and “speak to it”. Use your datapad on the terminal and then speak to it again. The terminal will learn your language and you can speak to it.

You’ll be asked to identify the Death-Giving worlds. You have six options and three of them are correct. They are Barren, Desert and Volcanic.

East Door – Go back to the main area and this time enter the East door. Inside is another Guardian Droid and you’ll need to deal with him the same way as the other one. Use the terminal as you did for the other room by talking to it, using your datapad and talking to it again.

This time you’ll need to identify the Life-Giving worlds. They are Grassland, Oceanic and Arboreal.

Once you’ve answered both questions correctly the central door will open giving you access to the Ancient Star Map.

Head back to the council and tell them what you’ve found. They’ll send you on a quest to find the other Ancient Star Maps and hopefully the location of the Star Forge itself.

As you walk back to the Ebon Hawk Deesra will stop you and tell you about a dangerous creature called the Terentatek. Once you’ve finished talking to her head inside the Ebon Hawk and visit the Galaxy Map in the cockpit to select your next destination.

You’re given freedom to roam around the galaxy but Tatooine or Kashyyyk is an obvious choice for the next location. Lock it in and lift off from the planet for your next adventure.