Finally you’ve arrived at the Star Forge and it’s time to take on Darth Malak himself. There are a number of obstacles you’ll need to get through before you can find him and he’ll through everything at you to try and stop you. Make sure you select your best party before heading out as you’ll be attacked by waves of Sith and Dark Jedi along the way. 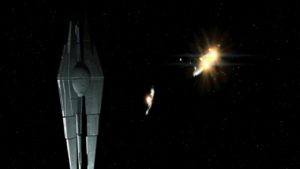 As you leave the Ebon Hawk you’ll be attacked by Dark Jedi. Help the other Jedi defeat them and then run into the Star Forge.

Head down the corridor to the south. Once you reach the intersection an army of droids will be sent to attack you. They’re easy to defeat, especially if you have the Destroy Droid force power. Make your way around the corridors, either the east or west path, then south and back towards the center. Here you’ll face a number of Dark Jedi. They’ll go down pretty easily. Either make your way to the south east or west door and take the ramp up to Deck 2.

As you enter Deck 2 Malak will be told of your progress and all available Dark Jedi will be sent to stop you. Make your way down the walkway, taking out the Dark Jedi, Sith Apprentices and Heavy Troopers as you go. They’re pretty easy to take down but will wear you down if you’re not careful. I don’t know how many there are but there’s a lot of them.

When the way is clear head to the central T-Junction and go south. There are blaster turrets to the west and sith to the east. Make your way to the west to reach the elevator that leads to the Command Center.

As soon as you step onto the large walkway you’ll be attacked from both sides by Sith and Dark Jedi. There are at least a couple of waves of them so I hope you stocked up on medpacs throughout the game.

Make your way to the south and open the door leading further into the Command Center. You’ll be attacked again on this smaller walkway with reinforcements coming from behind so don’t let any of your characters lag too far behind. Finally you’ll open a door and meet Bastila. She will stun your other two members and close the door behind you.

If you want so save Bastila you’ll need to give her the right dialogue responses. I didn’t do it in my playthrough but if you follow the dialogue options below you may be able to bring her back to the light side.

If not Bastila will go down pretty easily with flurry. She’ll regenerate herself a few times with the Star Forge but eventually be killed.

Head through the door past the factory area to find Malak. He’ll unleash his Droid horde on you. They are very easy to defeat. Just go to each of the computer consoles and disable the device. You can even create your own droid to help you with the battle if you want. Do this six times with each of the computer consoles and kill all of the remaining droids.

Once Malak sees that his plan has failed he’ll have to face you himself. Head through the Elevator Door East to find Malak. Make sure you use all your buffs before you face him. Flurry works well but he will use force powers over and over again to take you down.

If you get into trouble with this battle run away. Once you are far enough away you can use heal, medpacs or plant mines to help you. After you take Malak down to about one third health he will use one of the Jedi in the containers to regenerate himself. Now you know his plan.

Use Destroy Droid, Stasis or Drain Life on the Jedi to destroy them. Malak will have no way to regenerate himself. Once again fight Malak and take him down for the final time!