On the way to Tatooine you’ll have another shared dream with Bastilla showing clues to the location of the next Star Map. Once again you’ll be asked for a docking fee of 100 credits before you can explore the planet. Once again you may be able to convince them to forego the fee so that you’ll have more money to spend in their stores. 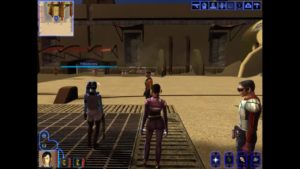 As you leave the docking area an alien by the name of Jor Ul Kurax will stop you and let you know the shipment has been delivered. A crate of Gizka. The crate may have broken and now the Gizka are running around your ship. Something to deal with a little bit later. For now let’s get onto the main quests.

Head through the docking bay doors into Anchorhead. The Hunting Lodge is the first door on the left. Outside you’ll meet Sharina for the Sharina’s Husband side quest.

Enter the Hunter’s Lodge and speak with everyone there. You’ll get some information about the various hunters and Sharina’s husband. Unfortunately you can’t get a license from here. So head out and visit the Czerka Office which is the next building down on the left.

As you enter the office someone is having an argument with the Czerka staff and storms out. Speak with the Protocol Officer and after some discussion she will give you a license if you agree to settle the dispute with the Sand People. She will also confirm that Griff was working in the Czerka mines but was captured by the Sand People.

When you leave the Czerka Office you’ll meet the alien who was upset earlier. He suggests negotiating with the Sand People rather than killing them and tells you of a droid in the droid shop, HK-47, who can speak one of their languages. You’ll also need some robes that you can find on the warrior raiders in the Dune Sea.

As you walk a little to the south you’ll be attacked by three Dark Jedi just like on Kashyyyk. I hope you have a decent party? Kill them and take their lightsabers.

Before heading out to the Sand Dunes you’ll need a droid to interact with the Sand People. The only available droid is the HK-47. It has a mysterious past and the owner in the droid shop seems quite eager to get rid of it. You’ll be able to persuade him down to $3,000 credits for the droid. You can threaten him for a better deal but I assume this will give you dark side points.

If you’ve won the Swoop Races already you should have plenty of Racing Bonds that you can sell for 60 credits each. Buy the HK-47 and add him to your party before heading outside.

Iziz, the Jawa, is standing to the left of the gate. Have a chat with him and he’ll tell you that the Jawas are being held by the Sand People. He also seems to have knowledge of ancient technology but won’t tell you anything until his people are set free.

Speak to the guard and show him your hunting license to be let through the gate. Just outside the gate you’ll be approached by Marlena who will tell you to give a message to her husband. Apparently she has a nasty surprise for him.

From the gates head to the southeast and you’ll come across a man waving at you in the center of four quirky droids. Have a look at the side quest “Trapped Tanis” for details on how to repair all four droids.

As you continue to the south you’ll come across the giant Sand Crawler with some miners out the front. As you’re speaking with the miners you’ll be attacked by Sand People. Three waves of Sand People will attack so you’ll have to be at your best.

To the south beyond the Sand Crawler you’ll spot an exit guarded by six or seven sand people. These sand people aren’t as tough as the sand warriors out in the dune sea so you should have no trouble cutting them down. They’ll drop Sand People Robes that you can pick up. Put them on before heading to the next area and running all the way to the south the the Sand People Enclave. Make sure you have HK-47 with you to translate before going inside. 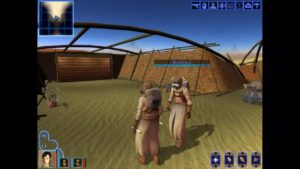 Go inside and if you want to take the peaceful option tell the first sand person that you are not a threat and that you want peace. He’ll take you to see the chieftan. You won’t be able to get anywhere with the sand people until you have proven that you can be trusted. Ask the leader what he wants and he’ll tell you to come back with Moisture Vaporators.

Head back to Anchorhead and go into the Czerka Corp office. Speak with Greeta Holda about the Vaporators and he’ll sell you some for 400 credits. You can persuade him drop the price to 200 credits if you have the skill.

Take the moisture vaporators back to the sand people chieftan. He’ll give you his gaffi stick as a reward. You can now ask questions about Griff, the Jawas and the Star Map. Griff and the Jawas have been captured but are now free to go. He also gives you a map so you can explore the eastern part of the Dune Sea. Explore the enclave and let Griff and the Jawas know that they are free to go, then head back to Anchorhead.

Head to the Czerka office to claim your reward for finding a solution to the sand people attacks.

Now that you have the map for the Eastern Dune Sea you can take the path to the east without getting lost. Before you head out buy some Bantha Fodder as you’ll need it. Go south to the sand crawler and then east to the exit. Head south until you see a couple of hunters outside a big cave. One of the hunters gets impatient and enters the cave. He’s immediately eaten. That’s what will happen to you if you try to enter the cave.

Speak with the other hunter, Komad Fortuna, as he has a plan to lure out the big dragon into a trap. You’ll need to lure the Banthas close to the cave with the Bantha fodder so that the Dragon will be lured out to eat them. He’ll then step on a bunch of mines and be killed.

Run out to the Banthas and give them the food. You’ll be attacked by four sand warriors so be ready for a fight. Bring the Banthas back to the cave and watch the cut scene of the Krayt Dragon being lured out and killed by the mines. 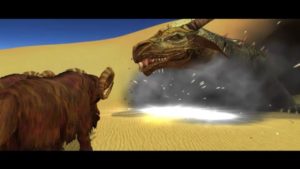 Search the cave to find a Jedi Master Robe on one of the bodies, the Star Map and the Holocron, for Bastila’s Mother side quest, in a tattered equipment pack at the back of the cave.

Head back to Anchorhead, complete any side quests that you want and then take off for the next planet, Manaan.

Outside the Hunting Lodge you’ll meet Sharina. Her husband died recently on a hunting trip and she was left with a Wraid Plate that she can’t see because she doesn’t have a hunting license. As you’ll be getting a license soon you can buy the Wraid Plate from her. If you buy it from her you’ll receive light side points. You can give her an extra donation for even more light side points.

The Gamorreans inside the Hunting Lodge know of his death. You may be able to work something out with them if you play your cards right.

Enter the Swoop Registration office in Anchorhead and speak with Motta the Hutt. The swoop races are organised on a three tier system. You start at the bottom and have to work you way to the first tier. Each tier has a faster time you need to beat and bigger rewards.

Tell Motta that you’re ready to race. It’ll cost 100 credits to enter and the times are much more challenging than on Taris. Hit as many accelerator pads as you can and you should do ok. My best time was 22.00 seconds. Once you’ve won all three tiers you should have enough racing bonds worth about 6,000 credits.

Once you have won all of the swoop races you’ll be able to complete the side quest below to help Nico sign up for a better deal.

Talk to Motta the Hutt and persuade him to give Nico a better deal with the contract. Trying to talk to Nico before you’ve won all the races and are the Tatooine Swoop Bike Champion is a waste of time so make sure you post the fastest time in the first tier before speaking with him.

Nico will now talk to you and you can tell him that Motta the Hutt has agreed to give him a better deal. He’ll take the deal and start off his career as a Swoop Racer. 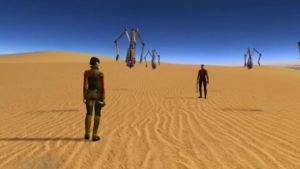 When you see Tanis in the desert waving at you go over and have a chat with him. His wife has set a trap for him and he can’t leave the circle of droids until they’re repaired. One wrong move and they will blow up. You can either repair the droids by using repair parts or doing it manually. Doing it manually gives more XP and you won’t lose any of your precious repair parts. Here’s the solution to repairing the droids.

Droid B: Prime numbers. Number 7 is the missing prime number.

You’ll find plenty of Wraid roaming around the Dune Sea. They are fairly easy to kill, especially if you use the Stun force power. It’s worth taking the time to hunt them as you can bring the Wriad Plates back to the Hunting Lodge for 26 credits each.

After you’ve rescued Griff from the Sand People he’ll be hanging out in the Czerka office. He wants to start a new business making Tarisian Ale but needs a sample Tach Gland so that it can be replicated. If you’ve been to Kashyyyk you should have one already. If not you’ll have to come back to complete this quest later.

As you walk through Anchorhead you’ll be approached by a man saying there’s a crazy woman in the Cantina. Head into the Cantina and speak with Bastila’s mother, Helena. Things are not good between Bastila and Helena but try to keep the peace between them. Basically Bastila’s father died trying to fight the Krayt Dragon and he left his Holocron with him.

Complete the Star Map main quest, find the Holocron at the back of the Krayt Dragon cave and bring it back to Helena to complete the quest.

That’s all for Tatooine. There’s been a lot to do but I hope you’re ready for another adventure! Enter the Ebon Hawk and make a path for the next planet.