Dead Hand of the Past 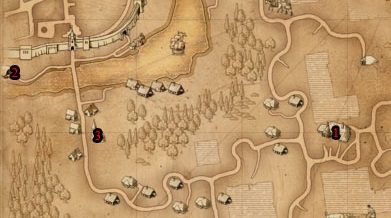 To begin this quest go to the Country Inn (#1) and speak with Declan Leuvaarden. His friend attempted to bypass the gates and enter Vizima through a small cave. The Cave (#2) is located just west of the southern gate. Head over there and go inside.

There are no Ghouls in the cave but you will encounter plenty of Echinopsae and Sated Echinopsae. Take a Swallow potion if you have difficulty with the battle.

After the battle take a look at the Sated Echinopsae to find Human Remains. This must be the remains of Declan’s friend. Go back to the inn (#1) and speak with Declan again. He asks you to bury his friend under the Chapel (#3)

Speak with the Reverend at the Chapel and ask for permission to bury Leuvaardan’s friend. The door to the Chapel will now be open so you can go inside and have a look around.

Click on the Sarcophagus to bury the remains but when you do the Specter of Leo will appaer and question you. Answer the questions correctly by saying “There is no destiny”, then “no”, and lastly repeating his phrase and the Specter will disappear. If you get the questions wrong he’ll attack, which isn’t such a bad thing as he’ll drop a Red Meteorite when you kill him.

Lastly, return to Declan at the inn and collect your 200 orens as a reward. You can also collect your reward in Chapter 2 if you forget to return to him before he leaves the Outskirts.

Next: Hot Potato
Back: Chapter 1