The Monster of the Lake 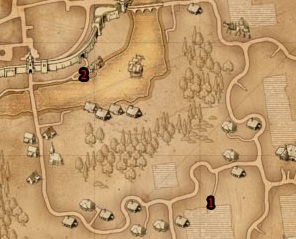 The monster of the lake is a Drowned Dead named Nadir. He can be found at night on the northern side of the lake by the Old Mill (#2). He will not appear if the Strangers in the Night quest is currently active.

When you approach the Old Mill a group of Drowners will attack first. Dispatch them and then deal with Nadir. He can be one-shot by use the Aard sign to knock him down and then attacking. Once he’s dead you can loot his body. Take Nadir’s Head to the Royal Huntsman (#1) for a reward of 200 orens.

Next: Wanted
Back: Chapter 1