Back to Warcraft 2: Beyond the Dark Portal

Act I A Time for Heroes 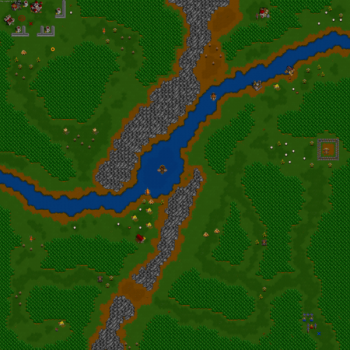 The first mission for the Human Campaign is not difficult but you will need to find 2 Heroes and bring them to the circle. You begin with the hero Alleria. She’s an archer with range almost as long as a Ballista and she does a ton of damage.

Make your way to the west and you’ll find the Mercenary called Danath. Bring your army to the river to the north and make your way along it to the east. Use Alleria to take out the ships in the river. Keep the Peasant alive and get him chopping wood. You’ll need to make a Transport ship later.

Head back through the gap in the rocks and continue along the river to the west until you come to the Shipyard. Use Alleria to destroy the enemy ships and build a Transport. Take your troops over the river and you’ll find the Paladin Turalyon behind the row of trees to the north.

Hop back on the Transport and sail down the river to the east. Disembark on the northern side and make your way to the circle in the northeast corner to complete the mission. 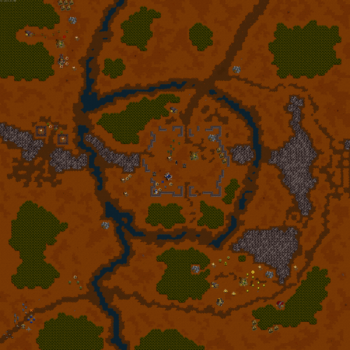 You begin the map in the southwest corner with the remains of the Human base being destroyed by the Orcs in the center of the map. Head northeast and set up a new base by the Gold Mine.

Send your army north through the pass and wipe out the Red Orcs. If you move towards them immediately you’ll catch them before they have a time to build up a large army.

Now that you have 2 Gold Mines under your control build up an army of Knights and Mages. Send them out to wipe out the rest of the Orcs to complete the mission.

3) Once More Unto the Breach 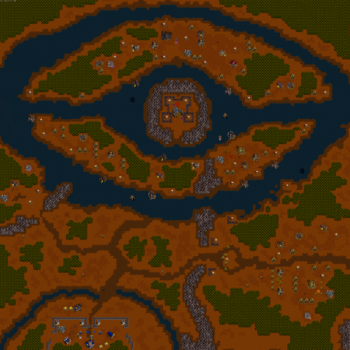 You begin with an established base on the southern edge of the map. Begin training Peasants to get your economy going and send your army north across the river and then east to the Orange Orc camp.

Build a few more Ballista and take out the Guard Towers as you carefully push through the camp. Keep your Knights and Footmen back to protect the Ballista. Destroy the Towers, the Barracks and the Town Hall first and then establish another base here. You only need to destroy the Orc Fortress in the north so there’s no need to destroy all the Orc structures.

Take your Ballista north to the river to shoot down the enemy ships. Build Gryphon Aviaries and a Shipyard on the river. Use Gryphons to clear out the Orc Towers and destroy the Fortress to the north. Send over the hero Turalyon to claim the Dark Portal to complete the mission.

4) Beyond the Dark Portal 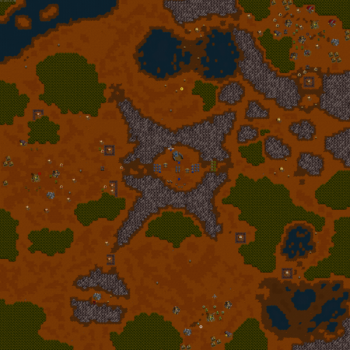 You begin with a large army in the center of the map. The White Orcs are to the south, the Red to the west and the Black to the northeast. I prefer to group up my army and send them out to the east. Then go around clockwise to wipe out the White, then the Red Orc bases. Establish a base in the south and replenish your troops as you lose them.

If you move quickly you should be able to take out the White and Red bases before they build up strength. Just try to keep your Ballistas alive and replenish troops as you go. Tech up to the mages and use them to reinforce your army with the Blizzard spell. Finally head up to the northeast to wipe out the Black Orcs. To complete the mission you’ll need to wipe out all Orc units and structures.

5) Upon the Shadowed Seas 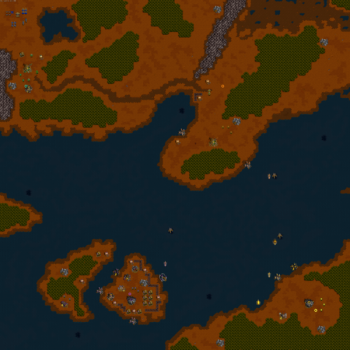 This mission can be a little tricky. You start with a small army in the northwest corner of the map. There are 2 Orc bases that you’ll need to wipe out quickly. The Teal Orcs just to the south and the Orange Orcs to the east.

Wipe out the Teal base first and then send your entire army over to the east. Carefully draw out the Orange Orcs and wipe out their base.

Build up your base and then place at least one Tower by the bay just to the west of the Orange base. Build a Shipyard and start harvesting the oil. You only need to build 3 Shipyards and wipe out the enemy shipyards so build a navy and take over the sea. Once the enemy Shipyards have been destroyed you’ll win the mission.

6) The Fall of Auchindoun 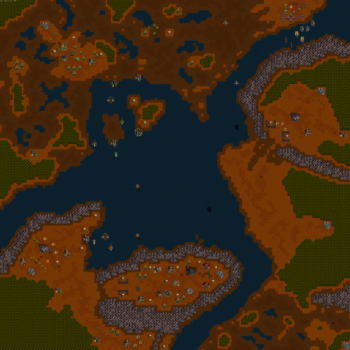 This mission can be completed very quickly if you head straight for the Orange base and ignore the rest of the map. The Orange Orcs are found southwest of your starting location. Load up your Transports and send them down to the Bleeding Hollow in the southwest. Bring along a Peon to help you out. Escort them with your navy and destroy the Cannon Towers first.

Unload your army and carefully start picking apart the Orange base. Don’t let your troops get out of control or you’ll lose too many units. Have your Peon build Guard Towers to help clear out the units and destroy the buildings a little quicker.

Once all Orange Orcs have been destroyed send Turalyon and Danath back to the Circle of Power to complete the mission.

Act III War in the Shadows 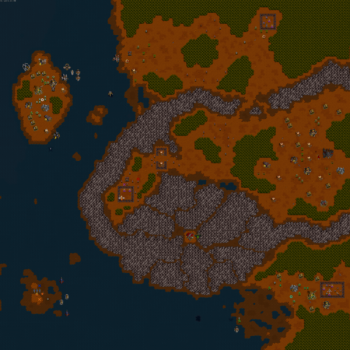 Send your Paladins and Mages over to the east on one of the transports. Escort them with your 2 Destroyers. Take out the Teal Orcs and then rescue the Peons and few other units in the prison to the east.

Establish a small base here but you can’t build a Barracks or many of the other structures. You can build a Shipyard so set it up and start harvesting oil. Build a navy of Destroyers and send them west and then north. Clear a path so you can land your hero units on the coast.

Send your units east and north until you find another prison. Rescue some more Archers, a Paladin and Footmen. Start making your way south and west until you break through to the third prison with the hero Gyphon unit, Kurdran and Sky’ree.

Line up your Archers close to the mountain with your Mage back a little. Send Kurdran over to wake up Deathwing and draw him back to the line of Archers. Use Blizzard for extra damage. When Deathwing runs away draw him back again. Repeat until he’s been killed, then fly over with Kurdran and destroy the Dragon’s Den to complete the mission. 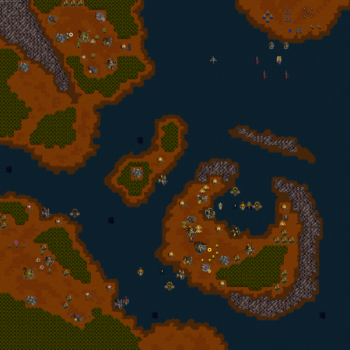 Load up your army on the Transports and send them over to the west. Unload the Demolition Squad and destroy the first turret. Send in your army to wipe out the White Orcs and take over the 2 Gold Mines.

When you have your base up and running build a Shipyard on the south side of the island. Take over the oil patch and build Battleships. You should have enough oil to construct 8 or 9 Battleships. Train a few Gryphons and send them out to clear the seas.

Now that you have your base established and control of the seas send your army to the southwest island to wipe out the Purple Orcs, then finish off the Yellow Orcs on the horseshoe island. If you run out of Gold there is a Gold Mine on the center island but unfortunately there’s not enough space for a Town Hall.

Once all enemy units and structures have been destroyed the mission will be complete.

9) The Heart of Evil 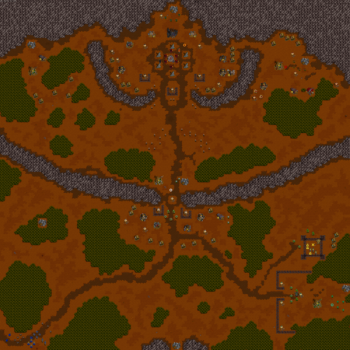 For this mission you only need to destroy the Shadowmoon Fortress and the Mystic Sanctum. The Shadowmoon Orcs are the Black Orcs on the northern side of the map.

Send a Peasant north to build a Town Hall next to the Gold Mine and the rest of your Peasants and army to the east to establish your main base. You will be attacked from the east so keep your army on that side and build Guard Towers.

Protect your two town halls as you build up to Gryphon Aviaries. Once you have a group or so of Gryphon Riders send them north to wipe out the Sanctum and Fortress.

Act IV The Measure of Valor 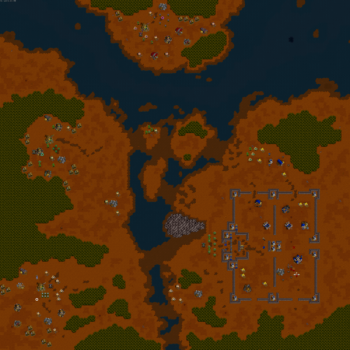 Even though the mission objective tells you to hold until the orcs retreat you will need to wipe them all out. There are three orc camps, one to the southwest, one to the west and one over the river to the north.

You can send your army and heroes out to destroy one of the bases immediately if you’re careful enough. Otherwise build up your defenses and wait until you have a proper army.

Once you have a decent army, I went for Gryphon Riders for this mission. Send them out and wipe out the Orc camps. The White Orcs to the southwest have Death Knights so you might want to deal with them first.

11) Dance of the Laughing Skull 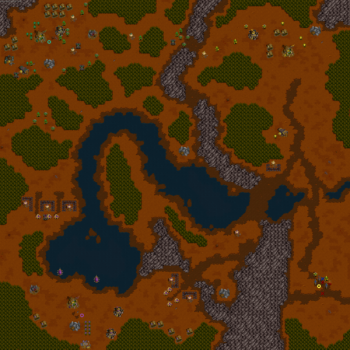 Send your units up to the north to claim the Yellow Orcs base. Yes, you’ll be using Orcs for this mission. March your army west and carefully push towards the Teal Orcs. Build a Barracks and reinforce your army with Grunts and Catapults.

Once you’ve taken out the Teal Orcs set up a second Town Hall. Defend your main base in the northeast becuause fairly soon the Purple Orcs will send up Ogres and Death Knights.

The Purple Orcs are weak to air attacks so build a few Dragon Nests and start training Dragons. Send them to the south and wipe out the Purple Base to complete the mission.

12) The Bitter Taste of Victory 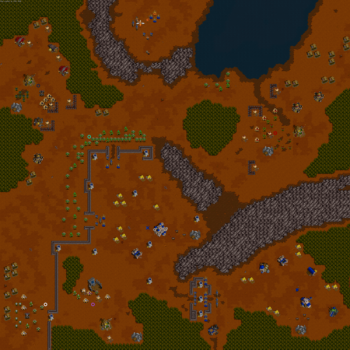 The final mission for the Human Campaign is actually pretty easy. Bring your forces back to the castle and try to hold off the Orcs. Make sure you bring up your units from the back line, including your Mage who can use Blizzard on the horde of Orcs to great effect.

Use the Dwarves in the north to blow up the rocks and send your heroes down to the base. Let Khadgar attack the portal as only he can destroy it. Use your other units to wipe out the White Orcs to the south of the portal.

Build a few Guard Towers around the place to protect Khadgar. Once he destroys the portal the mission and campaign will be complete.

Return to the Orc Campaign