For the Goddard System you’ll be flying Hornets with Hunter on your wing. You’ll be flying defence, escort and strike missions against some tough opposition. Central command have lost communications with the Goddard colony and it’s up to you to find out what’s going on. 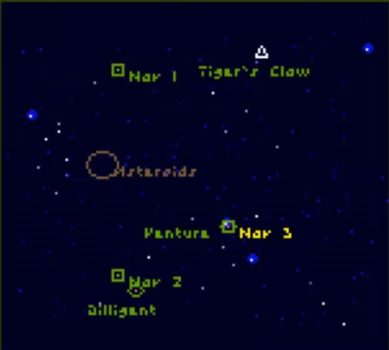 Objectives: Scout out Nav 1, proceed to Nav 2 to protect the Diligent and then escort a corvette back to the Tiger’s Claw.

When you reach Nav 1 you’ll come across 4 Salthi and a Lumbari. Unfortunately Hunter won’t be much help. I don’t think he scored any kills for me in this mission.

At Nav 2 protect the Diligent from 3 Krants. They’re tough to kill in a little Hornet. Try to taunt the Kilrathi to draw their fire away from the Diligent.

At Nav 3 the corvette will be under attack by 3 Krants. Take them out and escort it back to the Tiger’s Claw. Along the way you’ll be attacked by 3 Salthis.

After the first mission you’ll be told to head straight to the briefing room because you’re needed for a strike mission. 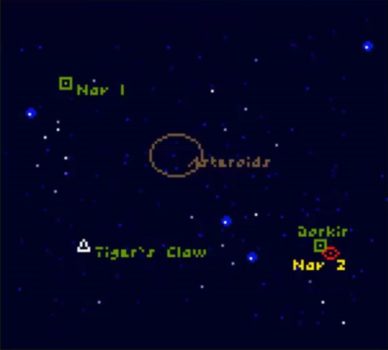 Objectives: Defend the Tiger’s Claw and then take down a couple of capital ships.

As soon as you launch you’ll be attacked by 3 Krants and then 2 Grathas. I wish Hunter would help out a bit more.

Head to Nav 1 and take out the 4 Salthis and the Lumbari they’re escorting.

Fly through the asteroid field and then take out the 2 Krants and Dorkir at Nav 2 before heading back to the Tiger’s Claw to complete the mission.