Whisper is understandably upset after losing the Test of Speed. Have a chat with him as the dialogue here is some of the funniest in the game. To console him you’ll need to give him the portrait of Whisper that you can find when you look at the Knight’s Tournament noticeboard. 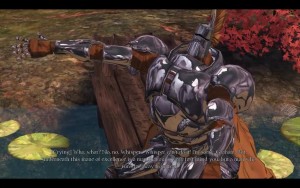 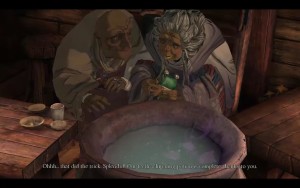 Once Whisper’s feeling better ask him “Can you help me catch a frog?” He’ll quickly grab one for you. Give the stinky frog to the potion makers in town. Chester will give you the color-changing potion as a reward. This is something you will need later for the Duel of Wits.

Go out of town and over Olfie’s bridge into the dark forest. Don’t forget to use your blue-flame lantern to light the way. At the other side of the forest the bridge trolls are having a meeting. Keep walking across the top of the gate and climb all the way down. 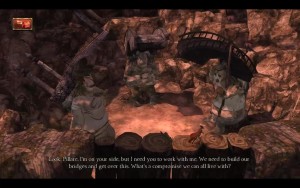 You can knock on the gate but you won’t be able to get in until you know the secret knock and password. Keep walking to the left until you come to a hole with an extendable ladder inside. Grab the ladder and place it on the side of the cliff. You now have a shortcut from Olfie’s bridge to the bridge troll meeting. On this path you’ll also find another gold coin.

Blow on Olfies Horn once more but don’t cross to the other side of the bridge. Run back to the bridge troll meeting. As you’re getting close you’ll see Olfie making the secret knock and telling the secret password.

1) Knock on the gate

2) Ring the bells in the tree

3) Ring the bells in the tree

4) Knock on the gate

After being invited into the troll chapter meeting Pillare will ask you for your troll horn as she wants to burn them all. Put down your small bell. The trolls will discuss a few items on their agenda and ask for your opinion. As far as I know it doesn’t matter who you side with.

When the trolls begin to repeat themselves you’ll be given the option to “agree with Waddles” and leave. You’ll be able to take a mouthpiece back but don’t take the bell. Take the horn mouthpiece that you don’t already have on the right. This is Waddles’s horn mouthpiece.

Head to the south of town to the horn that looks like Waddles’s mouthpiece. Blow on the horn with the mouthpiece and cross over. 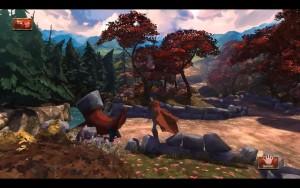 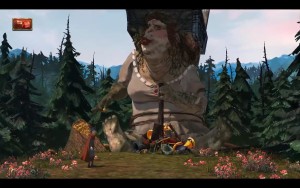 Pillare is there trying to set fire to all of the mouthpieces. The last horn that you need is there but how are you going to get to it?

Run back to the floating island. With the three horn mouthpieces in your possession you’re now ready to take the Test of Strength.

Before you even think about taking on Acorn in a test of strength use Pillare’s horn mouthpiece to blow the horn on the left hand side of the island. This will ensure that if, or when, you do get thrown off the island you’ll have a bridge to land on. 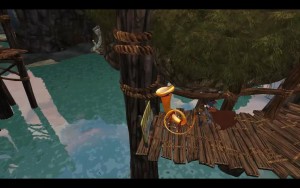 With Pillare in place go back and tell the knight that you’re ready to begin. Acorn will easily throw you off but you’ll notice that he accidentally drops his ball of cotton wool. Sneak up behind him and grab it. Try to draw it out as much as possible, pressing the action button to unwind it more and more.

When the knights see what’s going on they’ll throw down some sign posts in protest. Run around the posts with the wool and try to trip Acorn over the thread. You do this by using the action button twice as he’s about to step over a thread.

Acorn will fall over and lie on his back for a little while. Keep using the action button to unwind the ball of wool as much as possible. When he stands up he’ll throw off the island again. This time use Waddle’s horn mouthpiece to call Waddles, the bridge troll. 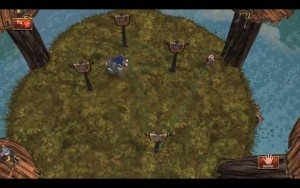 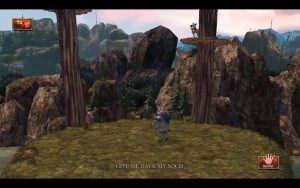 The process starts again. Trip Acorn over, pull out the wool before he get’s up and throws you over the edge. Use Olfie’s horn mouthpiece to call Olfie.

Trip Acorn over one last time. When he’s on the ground keep pulling the wool until a sock appears. Now you’ve awoken the bull!

Wave the sock at Acorn to make him charge at you. Stand in front of the large wooden beams so he knocks them over. Once he’s knocked over all three of the beams the island will collapse into the river. Olfie will save you from falling in the water and you’ll win the Test of Strength!

Continue to the last part of King’s Quest, the Duel of Wits.