Acorn is going to be pretty upset after losing his challenge. He’s by the big rock next to the trap. Give him his knitted sock back to make up with him. He’ll give you a pair of his knitted socks. Say to him “I could use your strength.” He’ll push over the rock allowing you to grab the bitterroot underneath.

Take the bitterroot to the baker for the free walnut strudel. By now you should have everything you need to complete the Duel of Wits. 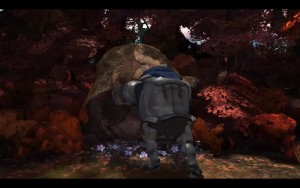 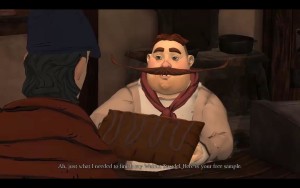 Walk back to the stadium. On the way you’ll be accosted by a band of squirrels led by Princess Madeline of Avalon. Give her the walnut strudel and the squirrels will leave.

Inside the stadium Manny is ready for the challenge. Have a look at the box on the left to see the game you’ll be playing, Duel of Wits. Take a seat opposite Manny.

You will lose the first game you play after being hypnotized no matter what you do. After the first game stand up and look at the glasses of wine. Put the color-changing potion in one of the glasses. The next time you play you’ll know which glass is safe to drink and which one isn’t. 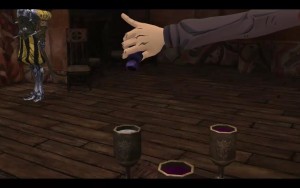 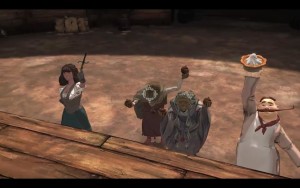 Play Manny again and this time try to beat him. If you can’t beat him after two tries you’ll have the opportunity to up the stakes by removing one of the glasses of wine. With you’re colored wine Manny will be the one being hypnotized. Tell him where to move and easily win the duel.

After losing in the Duel of Wits Manny will be so upset that he’ll challenge you to a duel of strength. The townsfolk will be there to help you. Pick one of their items with your last gold coin and fight Manny. The item you pick for the last duel with Manny will also determine the ending cut-scene with Gwendolyn.