Our ticket into the tournament is a ferocious looking eye. There are three ways to find the eye and we can begin by talking to one of the townsfolk. Depending on who we give the gold coin to it will determine the path we need to take to find the eye.

No matter what path you choose most of the parts in all of the paths will need to be done at a later time anyway. So just go with whatever path you feel is best for you. The Path of Courage is the longest and the other two are fairly simple by comparison.

Before you begin you’ll need to make sure you’ve found all the items in the Getting Prepared section.

Walk into the potion shop and give the elderly couple your last gold coin. If you haven’t done so already you’ll need to give them the pumpkin you picked up just outside of town. They’ll hand you the blue flame lantern.

Dip the blue flame lantern in the cauldron. It will come out purple. Kind of looks like a ferocious looking eye doesn’t it?

Walk back to the guards in front of the stadium and show them the blue flame lantern dipped in dye.

Once you have the Sugarshrooms and Starberries from the Getting Prepared section talk to the baker and give him the berries and mushrooms. Give him your last gold coin and he’ll bake you the biggest pie you’ve ever seen. Do you know anyone who’s big enough to eat a pie like this?

Head over to Olfie, the bridge troll. If you haven’t met him yet have a talk with him and tell him you’ll bring back lots of food. Give him the pie. After enjoying his snack he’ll get you an eye from the Snarling Snarlax. Whisper will take it before you can grab it. Olfie will try again and Whisper will grab it once more.

Seeing as Whisper has both Snarlax eyes Olfie will come up with a plan but you don’t hear what it is just yet. He gives you the mouthpiece for the horns.

Once inside the stadium you’ll ask for a second to get your eye. Walk to the horn and use your mouthpiece. Olfie will do the rest.

This is the longest path to take but most of this will need to be completed anyway. Walk into the blacksmith’s shop and give your last gold coin to Amaya. She’ll hand you the weed whacker.

Head out of town through the gate and walk up to the thorns. Use the weed whacker on the thorns to clear a path to the well. Achaka will be waiting for you there. Follow him down the well and through the same tunnel you went through in the beginning of the game.

Follow the path along until you come to two switches. You should know which one to press. Hit the right switch to open the door. 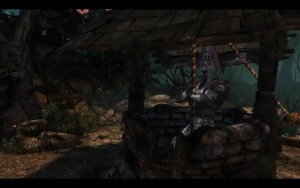 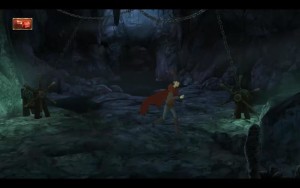 Walk through the door and sit on the stool. You’ll drop down into a cavern with wooden columns and spiky beams. Follow the path Achaka takes.

Achaka will tell you two words:

Keep this in mind before jumping to a new column.

You’re on your own for the next part as Achaka battles the dragon. Try and stay out of the flames while jumping from rock to rock. Eventually you’ll fall into a cage. 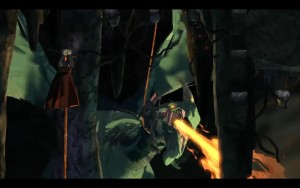 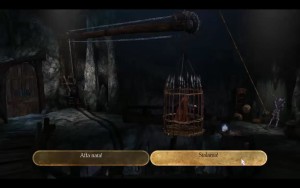 In the next part you’ll need to help Achaka hook onto the dragon’s tail with an arrow by setting up the shields and weapons racks in the right places. Follow the sequence below to get the dragon’s tail hooked.

1) Put the first shield on the stand and tell Achaka Affa Nata! He’ll hook the weapons rack on the next island. 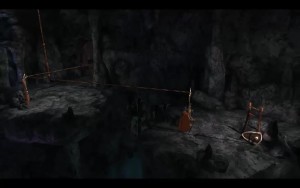 2) Make your way over to the next island and push aside the weapon’s rack. Tell Achaka Stalama!

3) Put the shield on the stand and tell Achaka Affa Nata! This will hook up the weapons stand at the bottom.

4) Climb all the way across to the bottom island and push the weapons rack to the right. Tell Achacka Stalama!

5) Climb back to the top island and pull down the shield. Tell Achaka Affa Nata!

6) Climb across to the right middle island and put the shield on the stand. Again tell Achaka Affa Nata! and he’ll hook the dragon! 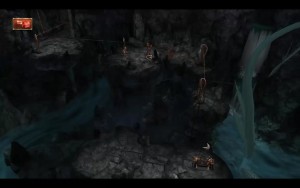 7) Climb back to the beginning and ring the bell.

Follow Achaka and go up to him for a lift when you see a small hole above a door. Walk down and hidden to the left you’ll find a switch to open the door. He’ll give you a quick archery lesson which will vastly improve your range. Climb down the tunnel and when Achaka gets stuck give him a push.

Face to face with the sleeping dragon Achaka asks you if it’s time to shoot.

Stalama: You’ll miss the dragon’s eye but Manny will give you one of his.

Continue with the Goblin Attack.