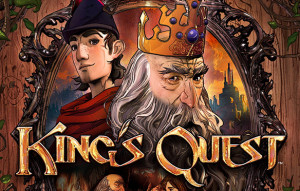 Being a massive King’s Quest fan I was super excited to hear about the release of King’s Quest: A Knight To Remember. This is the latest adventure game in the King’s Quest series by Sierra Entertainment. In this game you travel into King Graham’s past to explore some of the adventures that have yet to be told.

I will try to give as little of the story away when providing solutions to puzzles but obviously there may be a few spoilers that can’t be helped. As I go along I’ll try to point at all of the achievements that can be gained while playing the game.

When giving directions I’ll either user North, South, East, West or Up, Down, Left, Right. They mean the same thing.

King’s Quest: A Knight To Remember is being released in five chapters with only the first chapter currently available. You’ll discover how Graham reclaimed the mirror and won his knighthood. It’s available on the PC, Xbox and Playstation.

Tips for playing Kings Quest: A Knight To Remember

King’s Quest: A Knight To Remember differs from previous versions in that the mouse is not used for movement, only for selecting dialogue options and items in inventory. This makes the game a little bit smoother to play but may take some getting used to for those familiar with the old-style point and click.

There are 3 basic paths to choose from, Bravery, Wisdom and Compassion. Various dialogue choices and actions will progress you along either of these paths. You will be more or less highly favored among the townsfolk depending on which path you take and each of the townsfolk’s own bent.

Chapter 1: A Knight to Remember – In the first chapter of King’s Quest we join Graham as he reminisces on his Quest to become a knight during his youth. Help Graham enter the tournament and win the three challenges.

Chapter 2: Rubble Without a Cause – Graham has become King but making decisions is no easy task. To make it worse the rock goblins are closing in on the town.

Chapter 3: Once Upon a Climb – The kingdom of Daventry is safe and sound but King Graham is lonely without a Queen. It’s time for Graham to travel to Kolyma and rescue his princess!

Chapter 4: Snow Place Like Home – Was released on the 28th of September 2016 and features King Graham with his twin children, Prince Alexander and Princess Rosella.

King’s Quest: A Knight To Remember is the latest installment of the King’s Quest series by Sierra Entertainment. The first King’s Quest game was released in 1984 by Roberta Williams. These games were the first to introduced 3d environments into graphical adventure games.

The King’s Quest games focus on solving puzzles in a fictional world using items that are picked up as you travel. They have been tremendously successful and much loved by young and old adventure gamers all around the world.

These enchanting games have spawned many offshoots and collections over the years. I’m delighted that the series still continues to this day.