The monk at the entrance has taken a vow of silence so you will not be able to speak to him. Instead take a look at the stove and pick up the Matches. Walk down the screen and have a look at the wheel barrow. It’s empty for now but later you’ll need to pick something up from here.

Head forwards and enter the main part of the monastery. Walk down the carpet to the end and speak with the Patriarch. He’s obviously not interested in healing Hans but when you show him the Shroud he agrees to take a look at him.

Watch the cut-scene back at Kate’s old workplace where the detective is closing in on you. Hans is then taken to the monastery. The Patriarch tells you that there’s no chance to cure Hans.

Go in and see Hans. He’ll tell you about the Youkols and a monk called Alexei who studied with them. When you walk outside the room speak with the monk who was eavesdropping. He tells you in a roundabout way that Alexei is dead but gives you a Letter and a Stained Glass Mammoth.

The letter gives you a clue that “the key is in the light of the mammoth’s eye.” You’ll need to remember this for later.

Go back to the courtyard and pick up the Brush next to the bucket. Walk to the south and enter the main part of the monastery to visit the Patriarch again. He’s adamant that nothing can be done for Hans. Exit the conversation and have a look at the painting on either the left or right side. I believe they are both the same. Use the brush on the book to reveal a secret code. 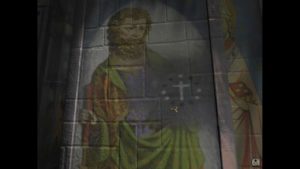 Go outside, head down and enter the door to the right of the cemetery. This leads to the library. Follow the spiral pathway to the right to end up on the ground level. Pick up the long pole with the hook to the right and use it to pull down the lamps in the same order as the secret code on the mural.

Once the right lamps are pulled down a window will open at the top of the library. Follow the spiral walkway all the way to the top and have a look out the window. You can see the small town of Romansburg.

Look in your inventory, you’ll have to go to the documents section, and use the Stained Glass Mammoth on the window. Click each of the panels in turn around the window to focus the light, revealing a mammoth on the wall opposite. Walk down the walkway to the mammoth outline. 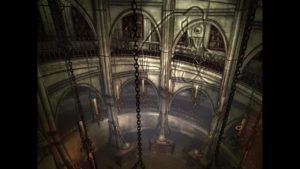 Have a look at the circle where the mammoth eye is and click the center of the circle to reveal a secret room. Take both the Book by Alexai – Notes and Sketches from the Frozen North and the Youkol Relic.

Read the book for some interesting information, particularly about the Scarlet Bramble that grows only on the tomb of one whose soul is at peace. It can be used medicinally by inhaling the fumes while burning.

The writing on Alexei’s tomb, Quo Sanctus Libri Abscondo Mei Scientia, means something along the lines of Where Saints Books Conceal My Science. I guess relating to the book you just found in the library.

Run back to see Hans. Place the Youkol Relic on the table with the Herbal Candle inside. Light the candle with the Matches and wait for it to cure Hans.

The monks will not let you just leave so here’s the process for getting out of the monastery. Go back to see the Patriarch. He’s not here this time so go inside his room and grab the Ornate Key. Use the Ornate Key on the gate at the entrance to this part of the monastery and pull the rope to ring the bell. This will call all the monks to prayer.

Run back to the cemetery. And push the casket so that it’s in line with the hole. Have a look out the hole in the wall. Run back and tell Hans that you are ready to go. Watch the cut-scene of the escape and then continue to the next part.

Speak with Hans and he’ll tell you that he’s prepared the clockwork heart for Circos’ horses but he’s too tired to fix them himself. He’ll give you the Mechanical Heart.

Leave the train and go down to the Cabaret.  Circos is trying to train a Youki but it’s not working. Speak with Circos and then go over to have a look at the horses. Grab the Mechanical Heart and place it on the spindle. The four pipes around the edges go to each of the four horses.

Before placing the pipes press the spindle in the center three times to wind up the horses. You’ll note the gauge at the top moves all the way to the right. Then attach the pipes to the heart in the following way. 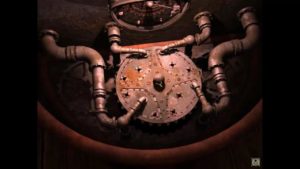 Press the central spindle again to start the horses. As you’re watching the show you’ll hear the train take off without you. Take out your phone and call Oscar to learn it’s been stolen.

Go into the General Store and he’ll tell you about the Gangcar. Exit the store and go to the beginning of the station, by the gate, and pull the lever. This will rotate the Gangcar onto the train tracks.

Get into the Gangcar. It’ll only travel a short distance before stopping. Get out and go back down the stairs. Walk to the Bourghoff Brother’s house and have a look at the Youki. Look at the newspaper on the desk for a clue as to what the brothers might be up to.

Give the Fish Candy to the Youki and he’ll follow you back to the Gangcar. Click on the Gangcar and the Youki will happily get in and start powering it for you. Continue on to the next part.

Next Part: The Frozen North