After arriving in Komkolzgrad head out the right side of the train. Walk towards the giant automaton in the distance. Oscar will tell you he’s staying in the train because the air is too polluted.

Climb up the ladder on the side of the giant automaton. Once inside have a look at the open cupboard. Take the Komkolzgrad voice cylinder, diagram and handle. Look at the controls on the right and use the handle in the center slot. The handle will move the automaton forwards and backwards. In the right foot of the automaton is a train winder.

Move the handle forwards twice until the automaton is in line with the front of the train and then press the red button. The train winding has now been done.

Head back down towards the train. You’ll see a man suspiciously leaving the train. Run back to the train, go inside and head all the way to the back. Someone has tied up Oscar! Click on Oscar to untie him. He’s noticeably upset and someone has stolen his hands.

Pick up the metal sheers and use the Komkolzgrad voice cylinder on the pedestal. You’ll hear about how Hans was working for the Russians in this factory. After putting the voice cylinder back head out of the train and back to the controls of the giant automaton. 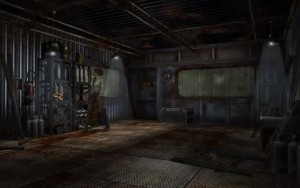 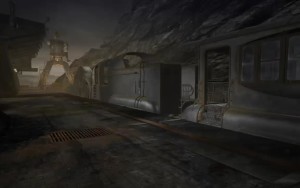 Move the giant automaton forward once and then head outside. You’ll be able to jump across to a ledge. Use the metal sheers on hole in the side of the building to open it further. Move to the other side of the room and look out the windows to see the factory.

Look closely at the shelving and pick up the strange looking spark plug. Enter the giant automaton and move it back one space. Walk down the ladder and back past the train. You’ll see a mine entrance with a lever. Pull the lever to bring up the elevator.

Inside the mine you’ll get another call from Dan. Have a look at the generator on the left side and put the spark plug at the top. Pull the lever just in front of the spark plug and the lights will turn on. 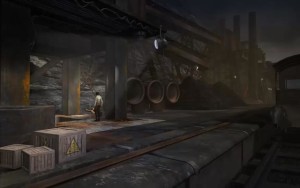 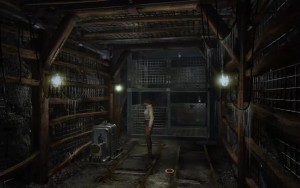 Walk all the way down the mine shaft and head into the elevator at the other end. There are two ways to go from here, to the south and the east. First walk to the east and up the stairs to the giant organ. Have a look at the automaton sitting in front of the keyboard. Are those Oscar’s hands? Pick up the screwdriver to the left

Go back now to the elevator and take the south path. Continue around until you come to a ladder with a notice screwed on at the bottom. Take a closer look at it and use the screwdriver on the four screws. Climb the ladder, enter the door and talk with Serguie Borodine, the director of the Komkolzgrad Industrial City.

The director is fascinated with Helena Romanski and is preparing for her to return one day. It’s up to you to find her and bring her back for a performance or he’ll never give you back Oscar’s hands. After talking with him he’ll let you look at her shrine. Go down the ladder and take a look. 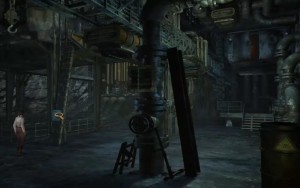 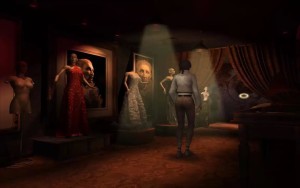 In one of the drawers is a scrapbook. In one of the pages is a cut-out describing how she sung with one of her great friends, Franck Malkovitch. We seem to be in luck as Kate’s mum is dating Franck.

Give Kate’s mum a call and you’ll discover that Helena Romanski is currently in Aralbad. Climb the ladder to talk to the director again and Dan will give you another call.

Tell the director about Aralbad. He doesn’t have any way for you to get there directly but will provide a monorail trip up to the space compound where you might be able to find a vehicle.

Walk towards the bottom of the screen over the metal ramp and you’ll get a call from your friend Olivia. Keep walking along the metal ramp and then climb the stairs on the left hand side. Once up the stairs their are two paths you can take. Up another set of stairs partly hidden behind an old rocket and a path to the right.

Head to the right and then enter into the open cylinder. A dunk colonel is inside. He’s not going to give you any information in his present state so don’t bother talking to him. Pick up the bottle of vodka and the colonel will make his way outside. He staggers over the railing and falls into a bin. Go back inside the cylinder and grab the key and the letter. 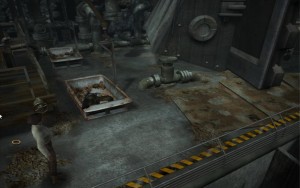 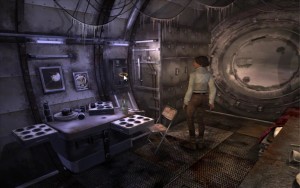 We need to find some way to wake up the colonel so we can talk with him. Head out of the cylinder and down the small set of stairs. Walk closer to the colonel and you’ll see a wheel crank. Turn it. This will turn on the water supply.

Go back up the small staircase to the water pump control panel. Use the key on control panel. There are a number of levers here. From left to right they are:

Push the lever to move the bin to the left. Now move it back and then turn the water on. This will give the colonel a big splash of water and wake him up. You’ll now be able to talk to him and get some clear answers. 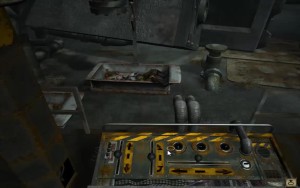 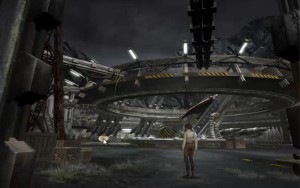 Continue walking past the colonel to the right and you’ll come to the cosmodrome. To the left side of the cosmodrome is the control panel for the rocket ship and to the right you’ll find the airship. Both inventions were created by Hans.

First go to the right, climb the stairs and try to get into the airship. It’s locked so go back to the colonel and ask him about the airship and he’ll give you the airship key.

Go back to the airship, open the door with the airship key and pull the lever. It still doesn’t work. Run back to the colonel who’s now on the other side of the cosmodrome. He won’t tell you how to get the airship running until you fix the rocket so he can take a ride to the stars.

Go to the rocket control panel and take the Voralberg key on the left. Use it on the cross-shaped slot on the left of the controls. 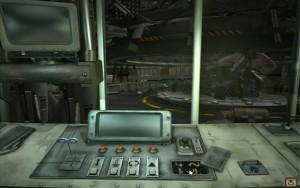 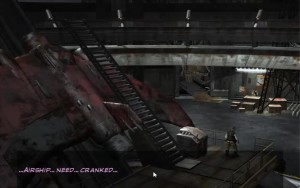 The screen still won’t turn on and it’s not immediately obvious what the problem is. It must be some faulty wiring. Open the rectangular panel on the bottom right of the controls. Connect the two wires up and turn the computer on.

The screen will tell you that a blood sample is required before the rocket can be boarded. Take the blood testing apparatus and hand it to the colonel. He’ll give you a sample. Take it back to the control panel and press the button second from left. The computer will tell you that the sample has been rejected because the alcohol level is too high.

Click on the blood testing apparatus again and Kate will use a sample of her own blood. Press the blood sample button again and you should be good to continue.

Click the left-most button to pick up the cylinder and then the curved arrows to send the colonel spinning around the cosmodrome. Wait for him to enter the spaceship and tell you to press the launch button. The launch button is the one with the triangle above it.

Just before he leaves the colonel will tell you how to get the airship working and will throw you the crank for the foghorn. Go back past his makeshift cylinder-home and take the stairs leading upwards. Up the top you’ll see a foghorn with an eagle inside a cage. 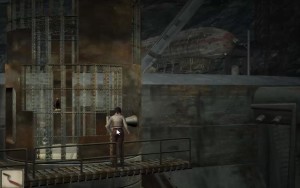 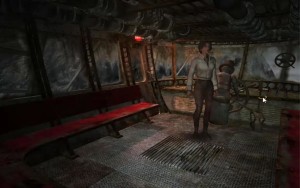 Use the crank handle on the foghorn to let the eagle out. The eagle will take to the skies and chase all of the birds away. Go back to the airship and pull the crank. This time everything should be working and the airship will take off, flying you straight to Aralbad.