Walk out of the airship towards the fountain. You’ll get a call from Mr. Marson who reminds you of the urgency of the situation. Continue in to the hotel Kronsky and talk to the guy behind the counter, Felix Smetana. He won’t give you any information about Helena Romansky or Hans Voralberg so you need to find some way to distract him so you can take a look at the registry.

Head over to the left side of the room and open the closet. Inside you’ll find a bottle of detergent. Grab it go outside to the fountain. Pour the detergent into the fountain to block it up and create a big mess.

Go back inside and draw open the curtains. Talk to Felix again. You may have to ring the bell if he’s busy watching TV. Once he sees what’s happened with the fountain he’ll grab a mop and run outside. Now’s your chance to investigate. 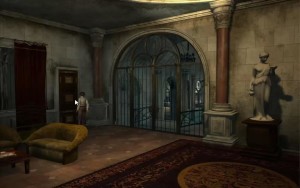 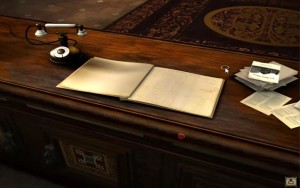 Walk behind the counter and take a closer look at the hotel registry. You’ll notice a few things. First, both Hans and Helena have visited the hotel. Helena does have a code if you look at the entry for 5/6/1981. The code is 1270.

Next grab the hotel pamphlet. Scribbled inside is the phone number for the Paris hotel. The number is 46433643. You’ll need this number later.

Behind the counter is also a little red button. Press it to open up access to other parts of the hotel.

Continue through the gates into the pool and dining area. Walk to the right around the large pool and continue as far as you can until you come to a table with plates and crystal dishes. Take a crystal dish with you.

Walk around to the other side, the dining area, and talk to the automaton, James. He’ll invite you to have tea with Madame Romanski when she finishes her walk. 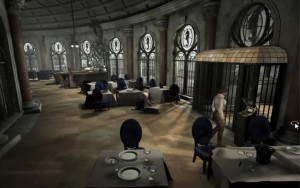 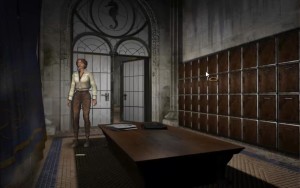 Take a look at the console near the gate leading to the outside. Enter Helena’s code which is 1270. This won’t open the gate to the outside but it will open the locker room door on the other side of the pool.

Grab the access code lying on the floor. The code for this card is 0968 and you can use it on the console to open the gate leading to the pier. Go back to the console and type in the code. Before heading out to the pier grab the gas mask and put it on.

Towards the end of the pier you’ll find Helena Romanski. After having a chat with her Felix will come storming out. Helena will stand up for you and tell him to treat you like a guest. 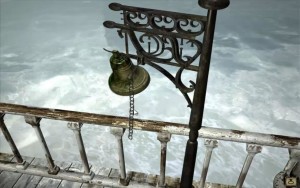 Helena is ready to come inside. You can ring the bell but James is too far away to hear. Grab the bell and put it on the bell stand closer to the hotel. Pull the chain and ring the bell. James still won’t come out so go and see him. It’s too windy for him to hear the bell but he’ll go out and bring back Helena anyway.

You’ll get a call from Kate’s mom and then James will return with Helena. Ask her about everything and she’ll share with you her disappointment at not being able to sing anymore.

There is a cocktail that a barman in Paris made her that restored her voice years ago. Luckily we have the number for that hotel in the Edenor Hotels pamphlet. Call the number, 46433643, and you’ll ask to speak to George. He’ll give you the recipe for the Blue Helena.

1) One measure of vodka

2) One measure of blue caracao

3) One measure of honey

6) Shake all ingredients together

Open the closet underneath the counter on Helena’s side and grab the lemon and crystallized honey. Head to the other side of the pool and turn the wheel behind the spa. This will heat up the spa enough to liquify the honey. Place the honey in the spa until it warms up.

Return to the bar and take a closer look at the bottles. To turn it on press the I/O button. Place the vodka bottle in the empty spot on the top right. The lemon goes on the squeezer in the top left. Lastly, the honey goes in the slot on the top far right. 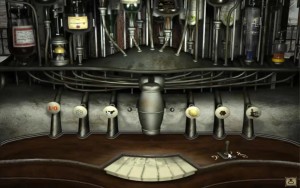 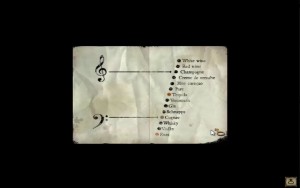 Next is blue caracao. This is third from the beginning of the treble section so flick the switch to treble and press the key third from the left. That’s the hardest part worked out. To add the rest of the ingredients press the honey, lemon and ice cube buttons. Lastly press the barman button on the right to shake and deliver the drink.

If you get it wrong Helena will reject it and you’ll get the chance to try again. You can keep trying until you get it right. After giving her the Blue Helena she’ll start to sing but doesn’t have confidence in herself. Place the crystal dish on the bar counter and she’ll sing again, this time shattering the crystal.

Return to the airship and receive a call from Olivia. Continue with the final part of Syberia here.