Walk to the right and smash the box for an Orb. Read the Note pinned to the boards to the right. Pull the box down and jump up for an Orb. Continue through the hole in the wall.

Grab all of the Orbs and Jars and you’ll be attacked by Shadow creatures. Break the crystal wall to the right by slamming into the stone block and drop down for an Orb.

Smash the block against the next crystal wall. Place a box down and attach a rope from the trapdoor to the box. Push the box over the edge so that it pulls the trapdoor down and you can grab the Jars. Alternatively grab onto the trapdoor with the rope and drop yourself off the edge. Use an ice arrow to keep the trapdoor open. 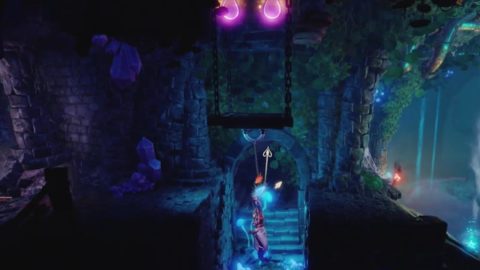 Make an ice raft in the water to the right. Place the stone or a box on the raft and use it to jump up to the ledge to the right. Shoot an arrow at the rope above to drop the Jar down.

Use the ring to swing up to the Orb above and then use Amadeus to pull the stone block down. First smash the crystal wall to the left for a few extra Orbs. 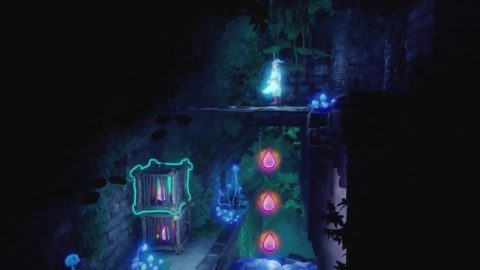 Place a box on the ledge and dash across to the other side, you’ll grab all the Orbs along the way. 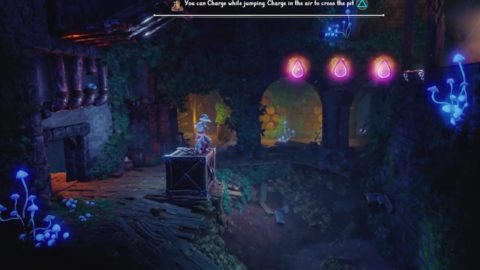 As soon as you get to the ledge place a box down and use it to jump up to a secret area above. 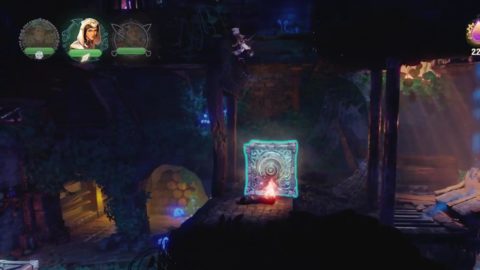 Inside you’ll find a few more Jars. Continue a little to the left and use the bars on the wall to jump and dash across. Make your way up the short tower to grab a few more Orbs. Drop back down and make your way to the right.

Use the ring to swing up and grab the first Orb. Smash the box on the beam and it will get stuck in the up position. Attach a rope from the box to the ring on the right. Use it as a bridge to make your way up. 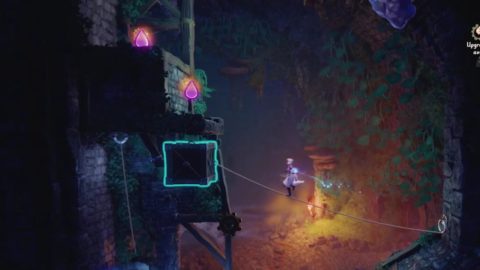 Use an arrow to break the boards at the top and then jump on the box on the beam as it bounces and then over to the right.

Get the next box on a beam moving and then jump on it to reach the two Orbs above. Dash or charge across to the left. 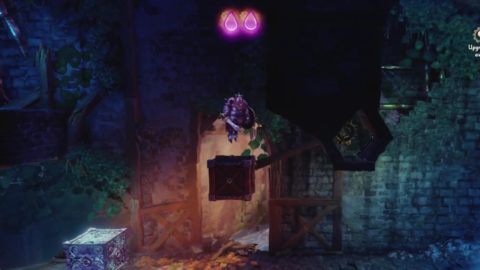 Head to the left and break the boards above to release the boulder. Place a box under the bridge section to lift it up so that it acts as a ramp. Smash the boulder up the ramp to break the crystal wall above. Climb up the bars or use a box and the boulder to grab the Orbs.

Head back to the right and get the box swinging again. This time jump on it and over to the ledge on the right.

Stack up the boxes to reach the bar and jump across to the left. Climb up through the hole back into the mansion and kill the Shadow creatures.

Freeze the platform to the right and place the boulder on top of it. Smash it across to the right to shatter the crystal wall and go through. 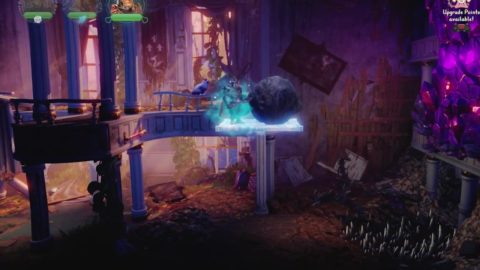 Use Pontius’ shield to deflect water onto the wheel to the right. This moves open the trapdoor above so water from a second pipe can flow down. Freeze the trapdoor in the open position. Place a box down by the gate and use Pontius once again to deflect the second stream of water to the wheel above. 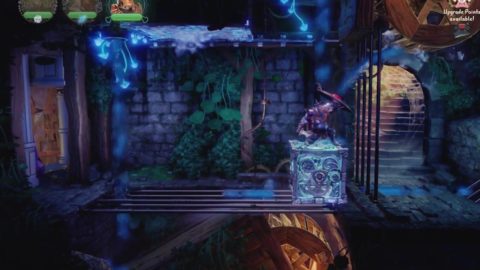 Break the rope to drop the box onto the spikes. Place a box on the leaf and jump up the leaves to a secret area to the top left. Inside you’ll see a couple of gates, a waterwheel and a few Orbs.

To get past the gates freeze the waterwheel to open the first gate. Then freeze the gate in the up position. 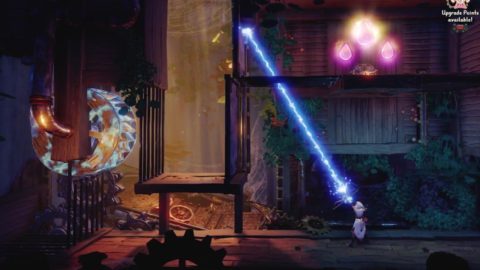 When the waterwheel starts moving the second gate will open as well. Jump through. Now you need to freeze waterwheel and then freeze the second gate in the down position. You can now jump up to the Orbs and the treasure, The Conjurer’s Big Book of Boxes.

A ledge to the right will lower so you can easily get back down. Head back outside and jump across the spike pit.

Place a box on the small ledge to the right and bridge across to it. You can now run across to grab the Orb above the pipe.

Use Amadeus to move the box to the left and then up and over the pipe. It will get stuck around the pipe so you can run up the rope and deflect water to the waterwheel. 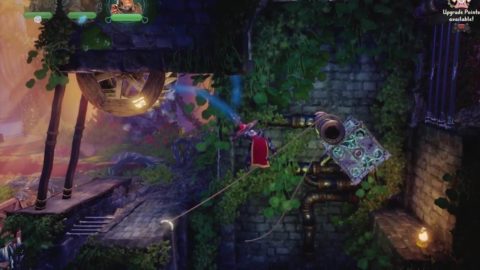 Head through the gate to the right. Use a box to grab the Orbs above and then smash the boards below. When you drop down you’ll be attacked by Shadow creatures.

Make an ice raft to jump up and continue across to the right. Drop down and freeze the gate on the ledge to the top right. Attach a rope to the stone block below and pull it out to attach it to the revolving wheel. Jump onto the stone block and up to the ledge above. 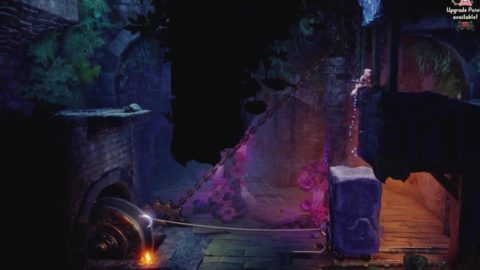 Place a box down and jump up to the bar on the wall. Jump and dash your way to the top. 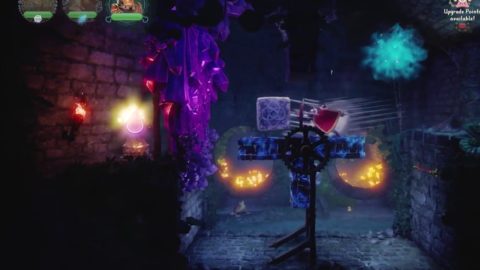 Grab the large Orb and treasure. This time it’s a Chandelier. Drop back down and continue to the right.

Place a box down under the water and use Pontius to deflect it to the waterwheel to the left. Attach a rope from the box to the turning wheel to use it as a bridge and jump up to the Orbs above. Pull the lever to open the gate to the right.

Drop down, dash across to the bars and climb up through the gate. Move the box on the beam to the left and use it to jump up to the ledge on the right. Continue up and across the next swinging box to the left.

Place a box down and jump from it to dash across to the ledge to the left. Move the next box up and freeze it in place. Use it to jump up to the ledge above. 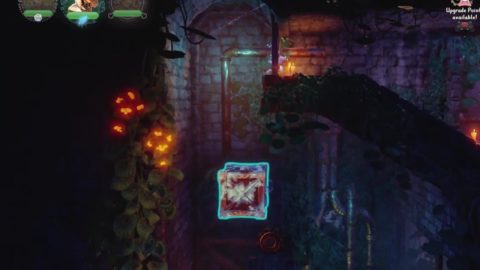 Use an arrow to break the boards above and grab the Jar. Make an ice raft and place the stone and a box on top of it. Jump onto them and grab the bar above. Jump across to the left for another battle with Shadow creatures.

On a rock ledge to the left you’ll spot a few Orbs. Use the leaf to jump up and dash across to them. Read the Letter from the Mayor and then drop back down.

Head to the right and swing across the ring. Dash across to the chandelier and then over to the other side.

Lift the box on the beam up and freeze it in place. Place a box to the right and create a rope bridge between them. Stand under the water and deflect it onto the waterwheel to open the gate to the right. 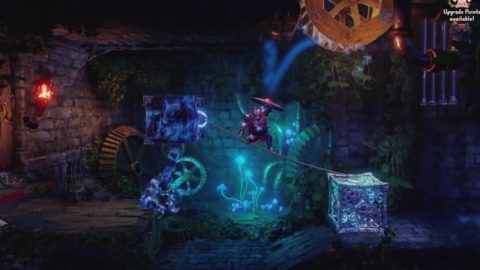 Freeze the gate in place and go through. Use the boulder to smash the crystal to the right. Smash it back up the mound of dirt to the left and the crystal in the roof will smash dropping a bunch of Jars to the ground. Continue to the right to complete the level.