Head to the right and blink across the gap. Place a plank in the sticky snow on the side of the cliff so you can jump across. To the right you’ll find the first slippery ice just past the two posts.

Place a steel ball down and roll up the slope. Grab the Orbs and jump up to the top where you’ll be attacked by Shadow creatures. Kill them and then jump across to the first air stream. Jump down and blink across to the side of the cliff for a hidden cave with a few Orbs. 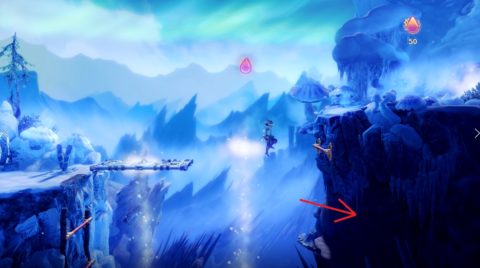 Jump back to the air stream and up to the ledge above. Dash above the wind current and then smash the boxes for an Orb. Head to the right and place a plank in the sticky snow to the right to stop the air current. Jump on top of it and up to the large Orb.

Continue to the right and place a box on the glowing stone. This opens up the trapdoor and releases the air stream. Instead of floating up go down for a hidden large Orb first. 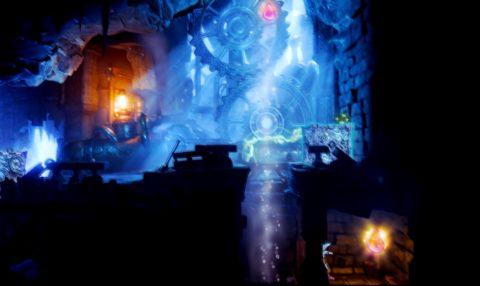 Now float up the air stream to the top. Place a box on the glowing stone to open the gate to the right and go through.

Have Zoya place an ice raft in the waterfall so you can jump up. Then freeze the spitting plant and dash across the gap. Make a plank and stand it up so it triggers the first glowing stone. Hold another plank or box over the second stone to open the gate. 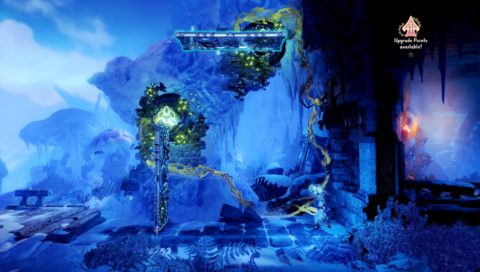 Place an ice raft in the waterfall and put a box on it so you can reach the Orb. Dash across to the right and use boxes or planks in the sticky snow to make your way up. Place a plank and a steel ball down about half-way up so you can smash the crystal wall to the right. 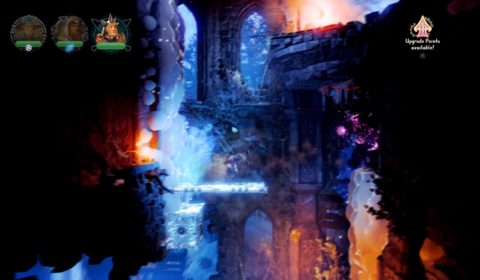 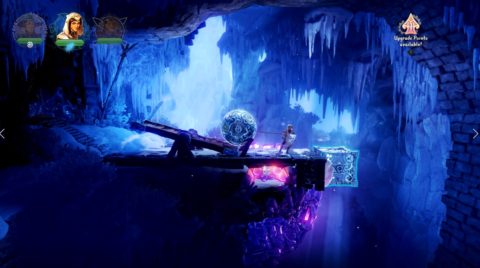 Pick up the Orbs and the Archivist’s Filing Cabinet and head back out. Climb the rest of the way up the chasm and use a plank so you can reach the Orbs above.

Amadeus can hold a plank above him to protect from the downward wind as you climb up the next ledge. Once you get there you’ll be attacked by Shadow Creatures. Kill them and float across the gap to the right.

Use the seesaw to be lifted up and float across to the bars on the wall to the right. Use the spitting plant to break the wall and climb up. 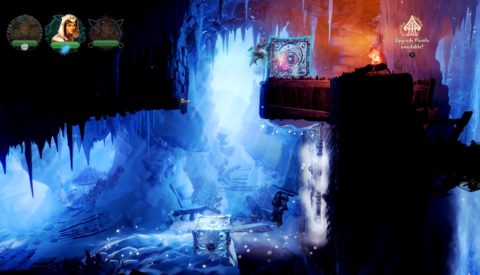 Make an ice raft on the waterfall and jump across to the small cave in the wall to the right. Use the ice raft and planks in the sticky snow to make your way up the chasm to the top.

Up the top you’ll see another two waterfalls. Use ice rafts to climb your way up. Place two planks on the sticky snow and wind current. Then attach a box to the second plank with a firm rope so it hits the glowing stone. This will open the gate to the left. 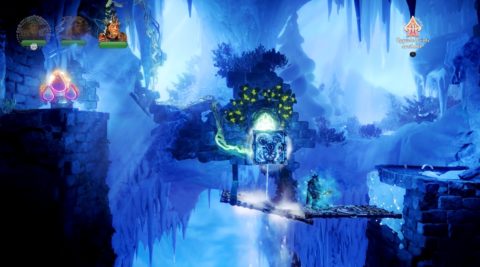 Dash across for a few Orbs and a chest with a Snowglobe. Head back down the waterfalls and place a plank on the air current. Attach ropes to both sides to make a bridge all the way across. Hit the button with a fire arrow to open the gate and go through. 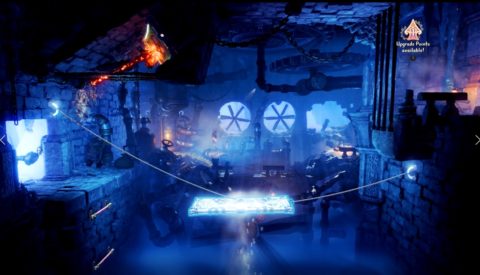 Use a plank to jump up the next chasm. You can freeze the spitting plant if you want. For the next puzzle you’ll need three steel balls. Hold them together with the firm rope and hang them in place so they hit the glowing stones. 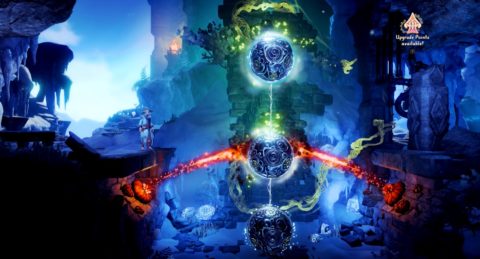 Head through the gate and make your way up the next gap by timing your jumps up the bars. Hit the last fireball into the wall to break it and jump through.

After the cut-scene you’ll be attacked by Shadow Creatures. Take them out and lower the bridge. Drop down and dash to the right.

Freeze the first spitting plant and then build a rope bridge to the other side. Walk across and use a Dream Shield and Shield to deflect the fireballs into the crystal wall. 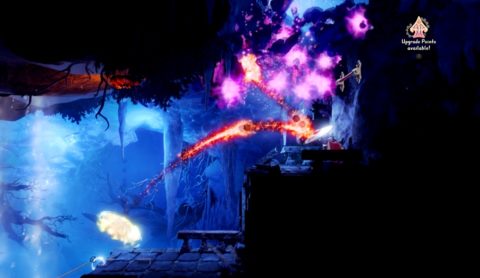 Jump up and walk to the right for another battle with Shadow Creatures. Some of them will be shielded by others so be careful which ones you attack first.

Place a box over the glowing stone and then use a steel ball to roll up the slippery slope. Up the top freeze the first spitting plant and place a plank on the air stream under it. Place a Dream Shield above the plank to deflect the fireballs back to the ledge and then deflect them up to the crystal roof. 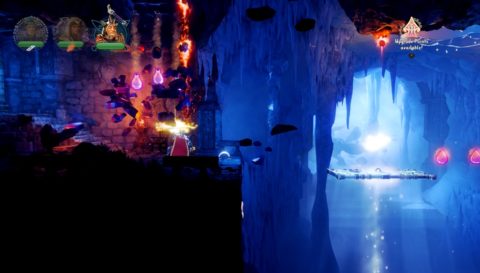 Jump up through the hole in the roof to find a few Orbs and a Letter to Zoya. Drop back down and use planks to jump across or place a box in the sticky snow above and swing across to an ice raft on the other side. Jump across to the bar on the wall and climb up. You’ll have a fight with Creatures. Take them out and use the ring to swing up for a few Orbs.

Stand on the button and freeze the gate that lowers. Drop a box into the air stream and follow along behind it. Use the box to climb up to the ledge above. 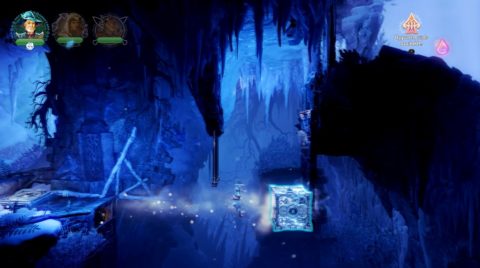 Repair the bridge to the right and use planks to finish it off. You’ll have a hard time jumping up to the next ledge because of the snow but build a structure with a box and planks so you can dash or blink across. 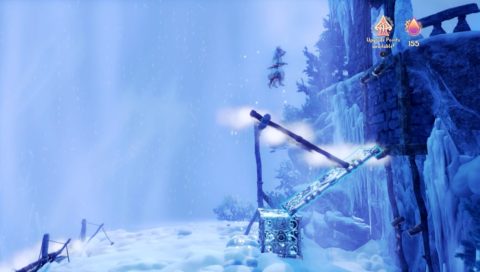 Float down on the other side to complete the chapter.