You start the level in a cave. Run to the right and freeze the ledge so it doesn’t drop down when you stand on it and jump up to the cave exit.

Walk to the right for a cut-scene with a friendly badger. Head into his house, grab the Orb and break the branches to free the mechanism.

Use a rope to pull the mechanism into the upright position and attach it to the ring to the left. Freeze the platform in place and attach a rope from the top of it to the far wall. 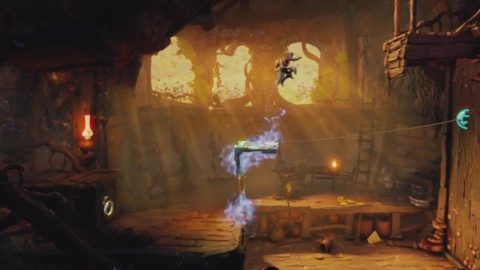 Jump up to the ledge to the top right. In the next room grab the Orbs and freeze the wooden platform so it doesn’t drop down. Have Amadeus make a steel ball and then switch to Pontius to smash it across to the crystal wall. 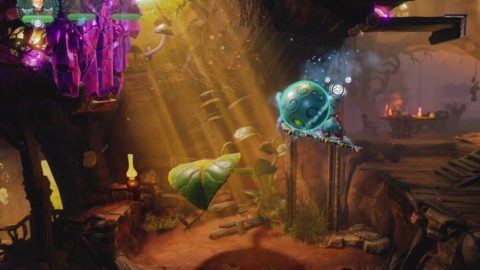 Jump across for a few Orbs. Jump back and continue to the right. Freeze the see-saw the with left side up. Jump up to the ledge on the left. It will lower and the Jar will come rolling out. Jump up to the bar and up again. Walk to the left for a little cave with more Orbs. 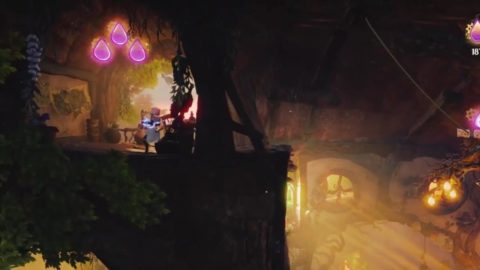 Break the rope to the right to free more Jars. Drop down and pull out the tho drawers by attaching rope to them. One of them has a Jar the other a dove.

Use the see-saw and a box to get flung up to the ledge on the right. Continue down the stairs and break the branches for a Jar.

Head through the next room into a library. You’ll be attacked by Shadow creatures.

Attach a rope to the sliding platform above and drag it to the right. Attach it to the wooden mechanism to lift it up and form a rope bridge. Head up the rope to the platform and jump up through the gap in the ceiling for a secret. 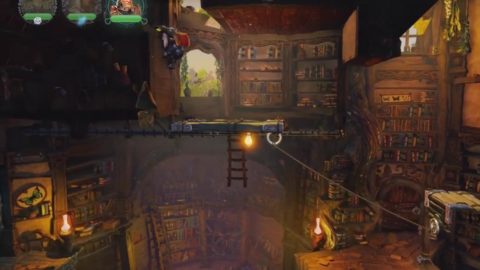 Up here you’ll find three Orbs and a Letter. Open the drawer to the right and freeze it open for another Jar.

Drop back down and then jump up to the right to head into the kitchen. Make sure Amadeus has the ability to create 2 boxes and place them on top of each other to the right. Climb up them and jump and dash across to the left. There’s a large Orb high up by the ceiling that you should be able to reach.

Get rid of the boxes and pull open the wooden ledge by attaching it to the ring. Drop down for an Orb. 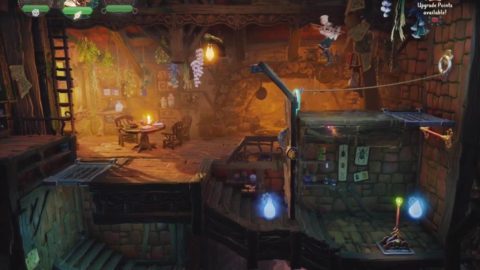 To get past the ledge freeze it, jump back up and break the rope. Drop back down and use a fire arrow to unfreeze it. You can now walk to the right for an Orb and to pull the lever which opens both grates. Climb up the right and drop down the grate to the left.

In the basement there’s a pit of poisonous plants. Drop a steel ball and ride it to the left. Use Pontius to smash it against the crystal wall to the left and jump across for a large Orb.

Ride it back to the right, break the wall and go through. Use the rings to swing across the next pit.

In the next room there’s a swing with a platform on one side and a bolder on the other. Smash the boulder to get it swinging. Jump on the platform and ride it around so you can pick up the Orbs.

Before continuing on your way to the top right enter the hidden cave to the bottom right. Grab the Orbs, then lower the platform by standing on it and freeze it. Create a steel ball and smash it up to the crystal wall to release the large Jar. The platform will need to be sloped enough so the ball is aimed at the crystal. 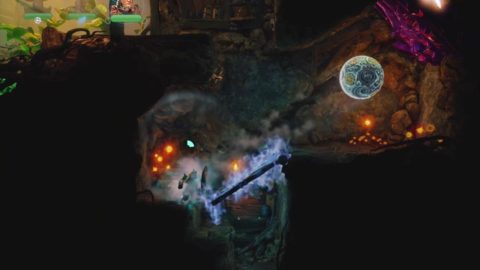 Break the branches and boxes for Jars. Pull up the ledge and freeze it half way up. Jump onto it and then across the pit to the right.

Jump across to the bars on the wall to the right and continue jumping up to the next room.

Pull the left drawer out for three Orbs. The right drawer has nothing. Attach a rope to the hatch above and hang off it to lower it. Either freeze it open or attach it to the open drawer below. Put a box on the drawer and jump up to the large Orb. 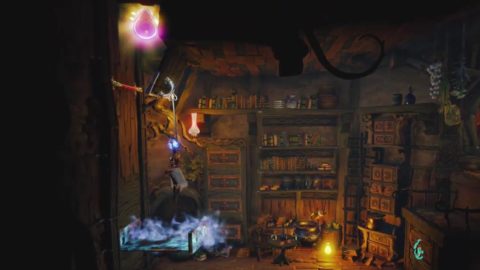 Climb back over the ledge to the right and use the steel ball to roll back across the pit. Break the wooden box for a jar and then use the swing to jump up to the bar to the left. Climb up to the room above.

Place a steel ball on the left side of the see-saw and stomp on the right side. The ball will smash the crystal roof above and three Jars will drop down. 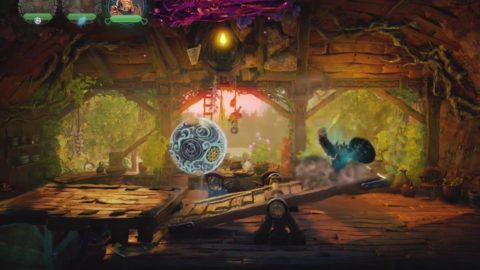 Continue to the right. Jump over the leaves into another room. Pull both of the wooden flaps up and attach them together with a rope to make a bridge. 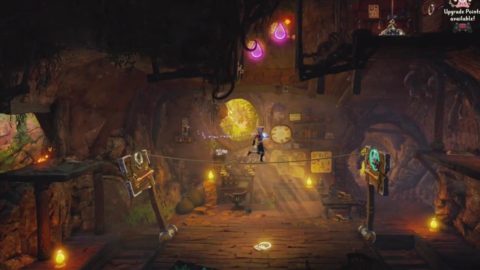 Jump up and pull the lever which opens the door down below. Pull open the shelf for a Jar.

Go through the door to the right and kill the Shadow creatures. Grab the Orb and drop down to the right. Swing across the chasm to the other side.

Jump on the right platform to push it down. Freeze it in place and hang from the left platform to grab the Orbs below. 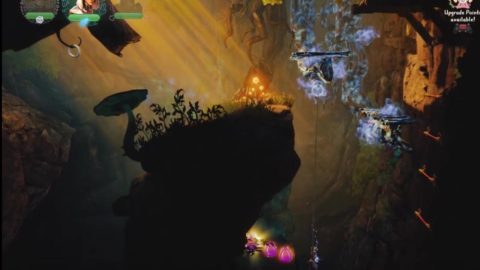 Jump back up, place a box down and use it to jump up to the Orb above. Continue to the right and smash the boulder on the tree branch both ways to smash the crystal walls.

Jump and dash up to the Orb above and then use a steel ball to roll across the pit.

The next set of platforms will lower when you stand on them. There is a secret cave in the wall to the right. Hang off the third platform and swing into the cave entrance.

Attach a rope to the ring on the underside of the wooden platform and pull it down. Attach it to the ring at the cave entrance. 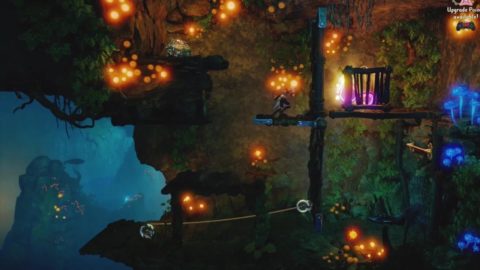 Jump up to the treasure chest to find A Peculiar Stein. Freeze the wooden platform, drop down and break the rope and jump back to where you picked up the treasure. Unfreeze the platform so you can get across to the box of Jars.

To get back drop down on the right side. Leave the cave and swing back up to the platforms. Jump across and stand on the right platform. Place a box on the second platform to lift it up and jump across to the ledge.

When you’re done head through the gate. Jump over the leave to the rock pillar to find The Badger’s Journal. Continue to the right and grab the Orbs. You’ll notice a large crystal roof above. Breaking it is a little tricky.

Lower the platform on the right so the smaller platform with the ring rises. Attach a rope to the ring and a steel ball. Smash the steel ball so it swings around and smashes the crystal roof above. 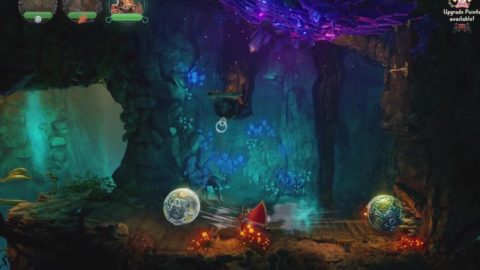 Raise the right platform and jump up to grab the bars. Jump up and over the ledge to the next area.

Jump across the platforms and break the box for a Jar. Raise the right platform and freeze it. Attach a box to the spikes on the wall to the right and use them to jump up. 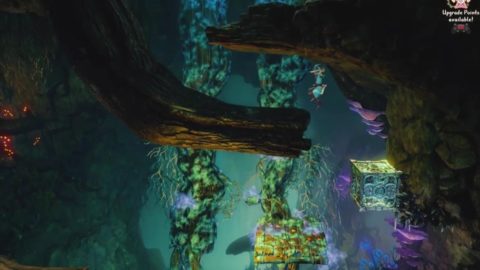 When you reach the top more Shadow creatures will spawn. Kill them and walk to the right. Place a box on the edge of the ledge to the right. Stand on it with Pontius and deflect the fireballs over the rock to break the branches. The Jars will slide down so you can pick them up.

Break the branches on the second ledge above and then make your way up. Grab the Orbs and jump up to the top left. Use the bouncy mushroom to reach the three Orbs. 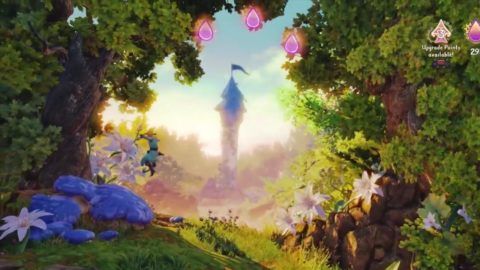 Head back and jump across to the right. Smash the boulder so it swings around and breaks the crystal roof to the top right.

Ride the boulder over to the right and jump up the bars to the top of the rock ledge. Once you climb over the top you’ll face more Shadow creatures.

Head to the right where two plants are shooting fireballs at each other. Wait for the wheel to spin around and ride it up to grab an Orb. 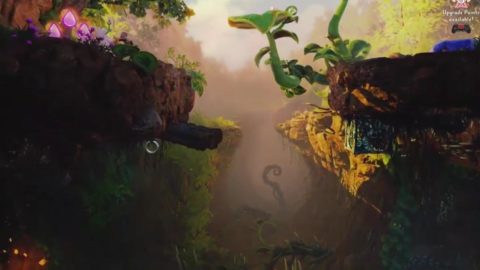 Jump across to the right for more Orbs then drop back down. Make your way across the spike pit by rolling across or using boxes.

Jump up the platforms and continue to the right to another door. Use the boulder to smash the crystal roof to the left and right. the Blue Key will drop down from the right side.

Swing the boulder and attach it to the ring on the floor. Place a box on the spikes and jump up to the lever. When you pull the lever the Red Key will drop down. 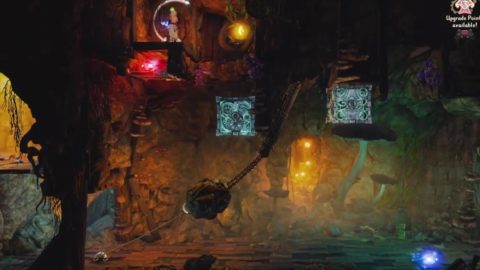 Use both keys to open the gate to the right. Grab the Orbs on the ledge above and head up the stairs to the right to finish the level.