Ultima Underworld: The Stygian Abyss is a fantastic role playing adventure game set in a vast fantasy world. You play the role of Avatar, wrongly accused of kidnapping a girl and sent into the Abyss for your crimes.

There are 8 levels in total with hostile and friendly inhabitants to be found in every corner. As you progress your character will level up and you’ll learn new skills at the shrines scattered throughout the Abyss. Ultima Underworld has a deep storyline and you can explore as much of the Abyss as you like without necessarily progressing with the story.

Unlike many RPGs taking someone’s items will actually make them angry. Resources are scarce in the Abyss so take time to explore each level fully. Each of the levels and areas are handcrafted. You won’t mistake one for another as they are all unique. Check out the Ultima Underworld walkthrough below and continue reading for more game play tips.

Level 4 – Knights of the Order of Crux Ansata and Trolls

Level 6 – Seers of the Moonstone

These are the documented spells. There are a number of others that you will come across as you explore the Abyss such as jump, sheet lightning and water walking. 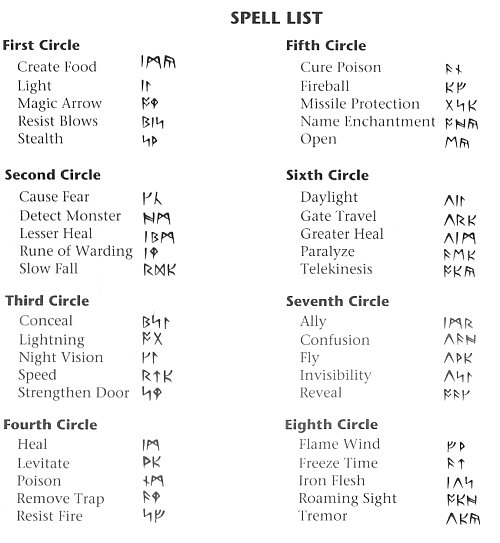 Attack Skills: SUMM RA (On plaque in the shrine room)

Magic Skills: MU AHM (On Plaque in the shrine room)

Other Skills: OM CAH (On Plaque in the shrine room)

Appraise: HUNN (Found on a scroll)

Attack: RA (Found on a scroll)

Charm: UN (Found on a scroll)

Repair: LON (Taught by Shak in the mines)

Search: LU (Found on a scroll)

Acroboat: FAL (Found in a book)

Defense: ANRA (Found on a plaque)

Swimming: ONO (Found on a scroll in Zak’s room)

Track: SAHF (Found in a book)

Unarmed: ORA (On a plaque)

Lore: LAHN (Found in the tombs)

Picklock: AAM (Found in a book)

Sneak: MUL (Found in a book)

Traps: ROMM (Found in a book)

Casting: SOL (Found in a book in the library)

Mana: IMU (Found on a scroll)

Ultima Underworld: The Stygian Abyss was published by Origin Systems in 1992. What was unique about this game was that you could roam around in a vast 3D environment and explore as much of the dungeons as you wish before completing various parts of the storyline.

Ultima Underworld is located in Britannia and is set after the events of Ultima VI which was released two years earlier.

Sales for Ultima Underworld took off quite slowly  but soon gained traction with half a million copies being sold. It was hailed as “the next true step in the RPG genre“.

A year later Ultima Underworld 2 was released and in 2015 work has begun on a sequel to these two games called Underworld Ascendant. Make sure you stay tuned for walkthroughs of both of these games in the near future.