Witcher 2 begins when you’re taken in to be questioned by Vernon Roche. He’ll ask you to recount the events of the day that lead up to King Foltest’s death. If you want to go through the events in chronological order begin with “That morning, the King summoned me.” 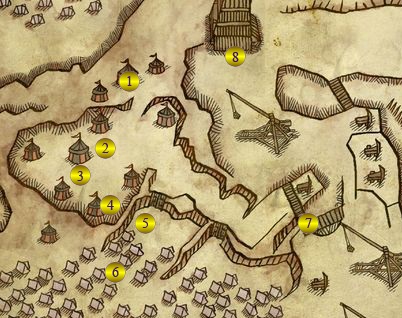 Your primary objective here is to meet King Foltest at #7 but you can have a good look around the encampment before you do and get used to the controls. You can use the Medallion by pressing ‘Z’. It will show nearby objects that you can pick up. They’ll glow orange.

Speak with the Soldier (#2) and Geralt will inform him that the job is done. Presumably a quest from before the game began. The Soldier will give you 200 Orens as a reward.

Next head to Newboy and the Crinfrid Reavers (#3) and they’ll tell you about a mysterious Amulet that Newboy found and it’s said to have magical powers. Newboy stupidly made a bet with his friends not to wear armor during the upcoming battle. This starts the quest Melitele’s Heart.

After inspecting the amulet you’re given a choice, tell Newboy that the amulet does indeed have protective powers or tell him that you’re not sure about the efficacy of the amulet. If you tell him that it has protective powers Newboy will be killed in battle. You can then pick up the amulet later when you find his corpse. If Newboy wears armor you can find him later in the Prologue. He thanks you for saving him but you can still kill him to take the amulet. The amulet gives 10% damage reduction but is cursed. It can be cleansed later in Chapter 1.

Head down to #5 for the first set of Training Dummies. You’ll find more in Chapter 1 and 2. Destroying the 10 Training Dummies here will unlock the Experienced ability. This grants +10% to all experience earned.

Down in the camp #6 you’ll find a Soldier and a guy called Strongarm. They serve as an introduction to a couple of the mini-games. The Soldier will play Dice Poker with you and Strongarm will challenge you to an arm wrestle.

You can hunt around the camp for items but you won’t be able to keep them as you’re only recounting a story in the past. When you’re done make your way up to King Foltest (#7).

The King is speaking with the Ambassador and they’ll make their way over to the ballista when you approach. Follow them and then speak to the King near the trebuchet. After the area is hit with a ballista you’ll move forwards once more and the King will stop to promote one of his soldiers.

After speaking again you’ll have the chance to aim a ballista. The correct angle is 1.5 degrees. Aim using the keyboard and not the mouse. The center should be locked onto the body of the structure with the targets feet where the aim should be and hopefully that will work. If you hit the guy you won’t have to fight him later on the battlements.

After entering the Seige Tower follow the King up the ladders and listen to his speech. The doors will open and the guards will race out to storm the castle, ending this part.