When being interrogated by Vernon Roche respond by saying “The assault” to begin this part of the prologue. It will continue the story from part 1 with King Foltest and his soldiers about to storm the castle. 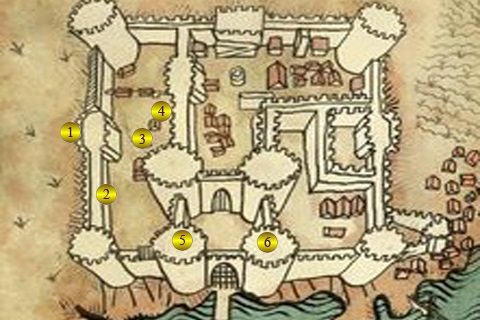 As you step out of the Siege Tower (#1) you’ll immediately be in battle with La Valette’s soldiers. It’s an easy battle as your aided by Foltest and his Temerian soldiers. Aard is a useful spell as it can be used to throw enemy soldiers from the battlements if they’re close enough to the edge.

Once the soldiers have been dealt with Foltest will give you the task of using the Ballista to break down the barricade to the tower. Head down to the yard using the steps at #2 and get ready for a fight against 3 Soldiers. Quen can be useful if you haven’t yet worked out the timing for the dodge.

As you make your way towards the Ballista (#3) you’ll encounter another 6 soldiers. Try to pick them off one or two at a time. Yrden can be helpful to try and trap one of them for a few seconds while you get in a few hits. The soldier with the shield can be tough at first. Try to time your parry with his strikes and then get in a few of your own. Be patient and circle around if you get into trouble.

When the coast is clear look at the ballista and rapidle Left-click to cock the ballista. You’ll be interupted by a few more soldiers. Dispatch them and continue with the ballista. After a few tries you’ll launch the bolt and destroy the barricades.

Before climbing back up the wall search the Assassin’s body (#4) for the Assassin Ability which gives you +25% damage when attacking from behind. Make your way to King Foltest (#5) and after a brief discussion he’ll give you the task of heading up to Aryan at the top of the tower to try to reason with him.

Run across the bridge and fight another group of soldiers. Remember to use Aard if one of them is too close to the edge to dispose of them quickly. Head up the ramp and speak with Aryan La Valette (#6).

You have three options here. You can reason with him and persuade him to give up, challenge him to a duel or fight him with all of his soldiers. If you reason with him you’ll help him escape the Dungeon later in the Prologue.