Once you reach the Nilfgaardian Camp on the Marlin Coast Avallac’h will reveal the plans. Ciri has been left out of the battle plans. You’ll have one final chance to prepare any potions you might need and repair your weapons and armor before the final battle.

When you are ready to begin the battle talk to Avalac’h. He and Ciri will use the Sunstone to call the Naglfar (Wild Hunt Ghost Ship) to Undvik.

The Navigator Caranthir will freeze everyone except for Ciri. You’ll take control of Ciri who has now come into more of her power. You can one shot most of the enemies as you make your way towards Caranthir.

You’ll fight with Caranthir until you get his health down to around one third. At this point a cutscene will trigger and Ciri will break his staff. She’ll just manage to escape the explosion. Geralt will thaw out just in time to continue the fight. 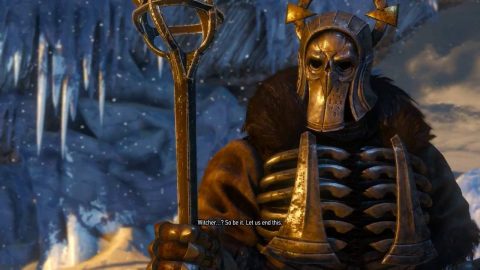 Caranthir will summon Ice Elementals and throw magic projectiles. You can mostly avoid the Ice Elementals and focus your attacks on Caranthir. Once he’s down to about 5% health a cutscene will trigger. Geralt will slice his sword completely in two. Caranthir teleports both of them deep underwater in one last desperate attempt to kill him. Quickly swim to the surface before you run out of oxygen.

Once Caranthir has been dealt with you’ll have a chance to meditate and prepare new potions if you need them.

Make your way towards the ghost ship. Your friends and those you’ve met along the way will be battling the Wild Hunt. When you reach Eredin he’ll be fighting with Crach an Craite. Crach is badly injured but continues fighting. Eredin will cut him down and then tells Geralt he wants to tell him something but only after they fight.

King of the Wild Hunt

This is the final battle with Eredin, the king of the Wild Hunt, so don’t hold back. Use all the potions you need. After taunting you he’ll teleport from one location to the other. He attacks with his sword when he teleports close to you otherwise he’ll strike out with magic from a distance.

Use the exploding Quen Shield ability to stagger him if you get hit. Eredin is very good at parrying so make sure you dodge around his blows and try to hit him from the side or behind. 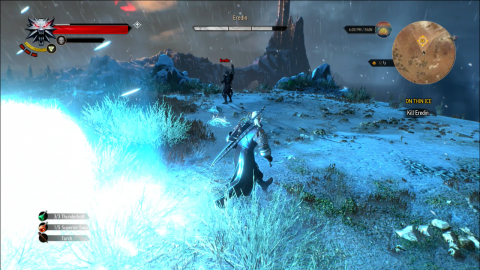 Before he dies Eredin tells you that they were both fooled by Avallac’h who has taken Ciri for his own nefarious plans.