Through Time and Space

Talk to Avallac’h to begin this quest. After your victory over Imlerith he thinks it’s possible to deal with the other two generals. He hopes to convince the general Ge’els to withdraw his support to King Eredin. This will involve travelling to Tir na Lia, the capital of the world Easnadh.

To get there you’ll need to travel through a series of portals. Make your way to the house where you met the Godling Sarah in Novigrad. Head down to the basement, destroy the breakable wall and enter the portal.

You’ll arrive in a desert world that once used to have a vast ocean. Walk with Avallac’h to the next portal. While waiting for it to open you’ll be attacked by Sandcrabs. 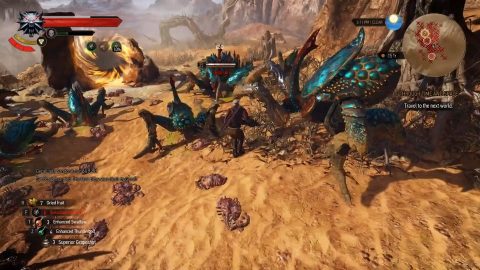 Kill the Sandcrabs and then take the portal to the next world.

When you arrive you’ll be separated from Avallac’h so you’ll need to reach the next portal on your own. There are poisonous fumes in the valley areas. There’s no way to protect yourself so you’ll have to run through them to the next hill.

From the start walk down the stairs and you’ll see the next portal and a Place of Power in the distance. Make your way towards them through the poisoned areas. 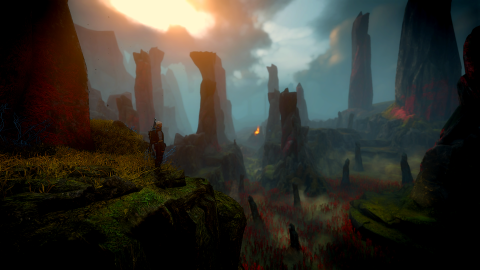 When you reach the Place of Power you’ll initially have to head away from the portal. You’ll find a place where you can climb higher and make your way around to the portal. Go through to the next world.

When you arrive you’ll be underwater. You don’t have much time to swim to the next portal but luckily it’s not too far away.

This time you’ll be taken to an ice world. Break the ice wall with Aard, Igni or your weapon. Outside a blizzard is blowing. You’ll take damage in the blizzard until you can find cover.

While you’re in this area you’ll need to sprint from cover to cover and warm yourself by any sources of fire. Activating the Quen sign will give you an extra couple of seconds before you start taking damage.

Once you reach the town and exit one of the houses down the hill Geralt will notice a lighthouse and remark that he should head in that direction. You can loot some of the containers along the way for some Traveler’s Notes and a Diary. 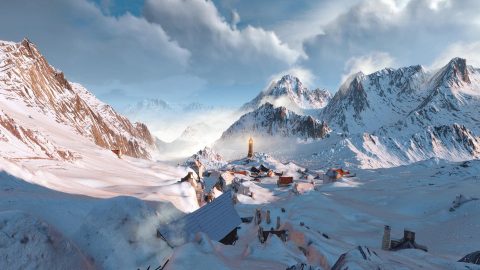 Along the way to the Lighthouse you’ll most likely encounter Hounds of the Wild Hunt. Take them out and continue on your way. Inside the lighthouse you’ll find Avallac’h wawrming himself by a fire. You’ll also find the City Secretary’s Diary. It tells of how the world was destroyed by the White Frost.

Talk to Avallac’h to find out more information about this world. After the conversation head through the next portal.

Finally you’ll find yourself in Tir na Lia. Walk with Avallac’h until you find Ge’els, who is painting an elf girl. After a short discussion Ge’els will agree to go with you.

After the dream Ge’els will be convinced and decide not to help Eredin. He tells you how you can trap him using something called a Sunstone. Ge’els will return to Tir na Lia and the quest will end.