Back to Kaer Morhen

To begin this quest you’ll need to read Monstrum, or a Portrayal of Witchers: Volume 2. This book can be found at the base of the tower under Yennefer’s room. The book can be found separately on top of a drawer.

A note in the margins of the book says “The book is a key. The mines near Kaer Morhen.” The mine it’s talking about is the Iron Mine to the southwest of Kaer Morhen. 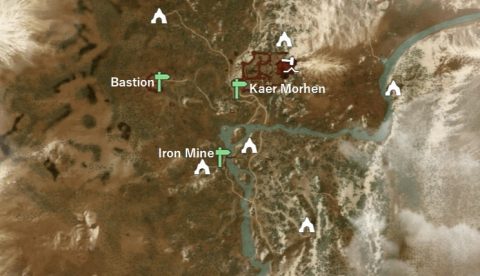 Make your way to the Iron Mine, head through the tunnel and defeat the Earth Elemental in the open cavern. Search around for a pedestal and place the Tome on the pedestal. Another tunnel will open up.

Make your way down the next tunnel to find the room with the forge. A voice will warn you to leave. If you choose to stay an Ifrit will rise up from the forge and attack. An Ifrit is a Geenie from the plane of fire. Use Aard to blast away its flames or it will do you damage when you get close.

Once the Ifrit has been killed use the Eye of Nehaleni on the forge to remove the illusion and reveal a small room with three chests. Search the chests for some nice loot, including the Diagrams for the Mastercrafted Wolven Armor.