This quest can be started after finishing A Matter of Life and Death but must be completed before The Isle of Mists otherwise it will fail.

Make your way to Triss’ apartment and either kill the Witch Hunters out the front or appease them and they’ll let you go. When you enter the house the landowners are hassling Triss and demanding her necklace as payment as the risks are too great to be housing a mage. You can either step and stand up for Triss or do nothing. 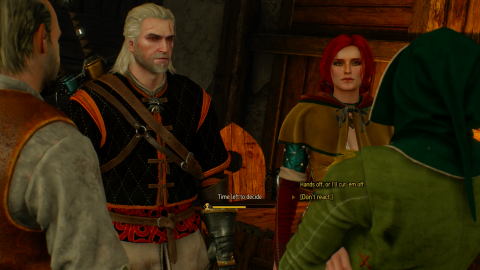 A Meeting with Triss

Afterwards Triss will tell you that she needs to evacuate the magic users as quickly as possible but two of them are missing. Triss is forced into a situation where she either has to leave the two missing mages behind or risk everyones lives by going after the missing mages. You get to advise Triss on whether she waits for the mages or leaves them behind.

As you leave the house the Witch Hunters from earlier will ambush you if you didn’t deal with them before. Follow Triss but wait for othe patrol to pass before continuing on your way. If you choose to leave the two mages behind you’ll go straight to the Kingfisher to meet with Olivier. I’ll assume you’re saving the missing mages, Berthold and Anisse.

Make your way to the mages house and kill the Witch Hunters before they kill the mages. Use Axii on Berthold and Anisse to convince them to follow you to the Kingfisher.

Becase you took extra time to rescue Berthold and Anisse you’ll be too late to save the innkeeper Olivier. All the mages have gathered here and Sigismund Dijkstra is also here to help the mages flee. Triss will give a speech to encourage everyone before you set off through the sewers.

Head through the sewers with Triss and clear a path so the other mages can follow. Use Aard on a wall to break through and reveal a very old library. Examine the corpses and Geralt will conclude that a Katakan is nearby. Kill the vampire and then continue on your way to the docks.

At the docks you’ll start a conversation with Dijkstra. At this point Witch Hunters will arrive and you’ll need to kill them before continuing. Triss will walk up to say her farewells. You can convince Triss to stay if you want to romance her or let her leave to look after the mages.