The Creature from Oxenfurt Forest

This contract can be found by reading the Oxenfurt notice board or talking to Hans at his camp. Southeast of the Herbalist’s Hut you’ll find a camp with Hans and his men. They went out searching for the beast but two of his men disappeared. 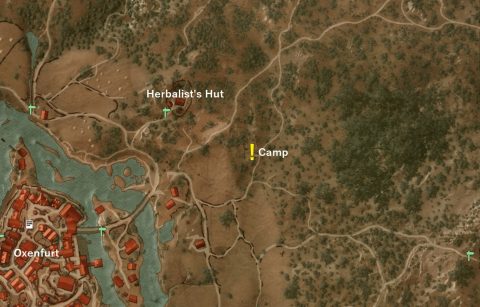 Once you accept the contract follow the map marker further east-southeast until you find a corpse. The second body appears to be missing. Examing the corpse and blood and then a human arm a little further to the north.

Follow the trail until you find the rest of the body. Eventually you’ll come upon some rocky cliffs. The Archgriffin, Opinicus, will be here at night time and a battle will instantly begin. If you arrive during the day search the nest for some Feathers and a Letter. Geralt will deduce that the beast is an Archgriffin.

If you arrived during the day meditate until 7pm for a fight with the Archgriffin. Once it’s been defeated take the Trophy and Archgriffin Mutagen and return to Hans for your reward.