In the final part of Broken Age we need to cause a meltdown between the two ships which have collided. Vella and Shay are both stuck on separate ships. They need to work together in order to get themselves out of this sticky situation and save the day.

First click on the ship where Shay is located. You can talk to Alex and Vella’s family but they don’t have much to say. Use the Grabbing Gary Controller and the other ship will hug this one. Hope will turn off the manual boom arm controls and return them to central control. That’s all you can do with Shay for the moment. 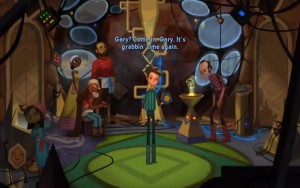 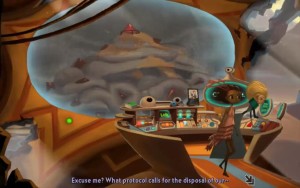 Change to Vella’s view. Hope is pre-occupied with trying to get the Space Weaver to change direction. Walk out of the control room and head to the left into Shay’s room and down into Marekai’s area. Pick up the scrap wire lying on the computer and have a chat with Marekai’s Boss. When you’re finished head back out again.

Just to the right of the control room door the hexi-gal has had an unfortunate accident again. Pick up the hexi-gal lying on the ground. Walk to the central area and fire the death ray with your death ray remote. This will fire the death ray on Alex’s ship. To stop it he’ll turn off the main power. Shay will need to turn this back on later in order to cause a major meltdown.

Change to play Shay and you can now roam throughout the rest of the ship. Head out the door and climb down the ladder. You can have a brief chat with Shay’s dad.

There is a book located at the front left of your screen have a look at it and write down the symbols. You’ll need to remember these for re-wiring your hexipal later in the game.

Head out the right exit and you’ll find yourself in the music room with a large harp in the center. Pick up the broken radio in the foreground and take it back to the dancing hexipal that Rocky is playing with. You’ll be able to grab the hexipal. Take note of the wiring for the dancing pattern at the back of the hexipal. 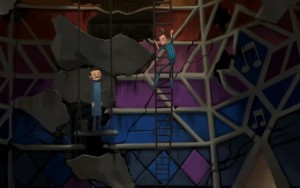 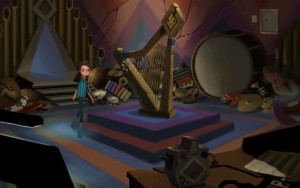 Give Alex the repaired radio. Head down the ladder and this time take the left exit. You’ll be confronted by a group of savage hexipals. Luckily we have just what they need to calm down. Place your dancing hexipal on the floor and the savage hexipals will start to worship him.

Walk back to the music room an

d the savage hexipals will follow you. We want him to play the harp but we’ll need to do a little rewiring first.

Place the wires according to the pattern in the book. If you’re not sure head up to the charging station to see what symbols display once you’ve done the wiring so you can see where you’re going wrong.

Click the hexipal on the harp and he’ll start playing. The savage hexipal buddies will be captivated, giving you a change to turn back on the main power.

Walk back to the left and grab the mallet that is acting as a lever. This is a fake power control. You’ll have to head further around to the left to find the real one. Pull the lever to turn on the power. 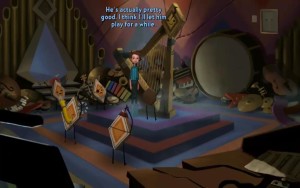 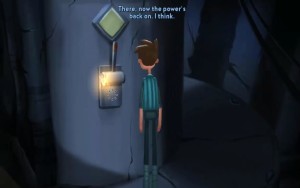 Go back to the hexipal and pick him up. Rewire him the same was as Vella’s so he has the swinging pattern. Give him the mallet and get him playing the drum. This will cause Alex to come down and try to wrestle the mallet from the hexipal.

Switch to Vella and go into the Space Weaver’s room. Wire your hexi-gal so that it plays the harp. Place the hexi-gal on the navscarf and she will tickle it. This will cause Hope to come out to see what’s going on.

Walk into the control room and press the red triangle button to turn on manual boom arm control.

Change to Shay and press the Grabbin’ Gary controller which will hug the ships together.

Switch to Vella. Walk into the central area, press the death ray control for the last time and enjoy the final animation sequence.