All Bets are Off!

Before you can even face the King Dice you’ll need to get through a number of mini-bosses. In total you’ll face at least 3 but as many as 9, depending on your dice rolls.

You move along the board by ‘rolling’ the dice. You do this by parrying it as it turns. The number is ends up on is how far you move across the board to the right. Some of the numbers, 1, 4, and 8, have hearts above them. This means you’ll gain an extra hit point when you land on them.

Some of the squares are marked as ‘Safe’. You won’t have to fight a mini-boss if you land on them. Towards the end is a ‘Start Over’ square. Avoid it at all costs as it will send you back to the beginning of the board. If you land on it once it will be turned into a ‘Safe’ square.

The three alcoholic beverages to the right of the screen, the Martini glass, shorter and whiskey bottle each have their own separate attacks. You’ll need to avoid them and defeat the three beverages to win this level. 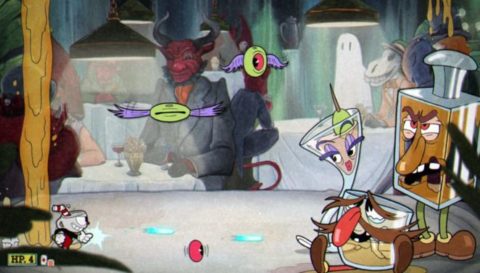 Martini Glass: Spawns 2 flying olives that will fly around and shoot projectiles at you. You can destroy the olives.

Shorter: Falls over, spilling its contents across the floor towards you. You’ll need to jump over it to dodge it.

Whiskey Bottle: Pops its top and shoots whiskey into the air. If you stand still it will hit you so you need to keep moving.

To defeat this boss you’ll need to defeat each of the three alcoholic beverages individually. You can only hit the Whiskey Bottle once one of the drinks in front of it has been defeated. Once all three have been defeated the fight will end. 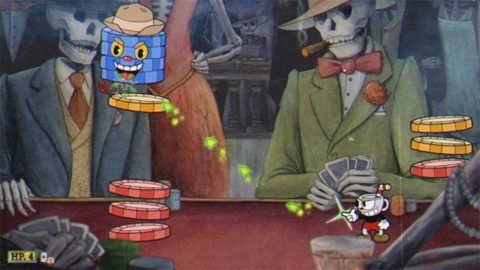 This is one of the easier boss fights for this level. The Poker Chip Stack will send out chips from its stack across the screen. You’ll need to dodge them while continuing to shoot at the stack. Keep shooting and eventually the boss will be defeated.

This boss fight takes place on two giant ash trays which act as platforms. The Cigar will appear on one of the ash trays and only has a single attack. He shoots out circling fireballs towards you. 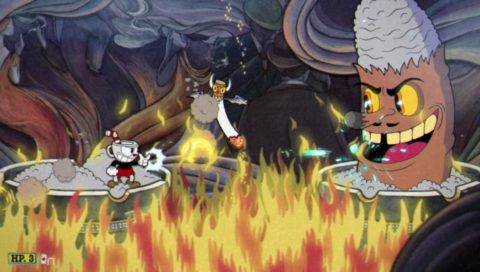 The Cigar will eventually drop down and appear in the other ash tray. When he does this you’ll need to time your jump across to the other ash tray while avoiding the small cigarette that moves up and down in the middle.

Mini-Boss 4 – Dominos on a Trapeze

This boss fight takes place on a conveyor that is constantly moving at the bottom of the screen, making this fight a little tricky. The Dominos are swinging up above. You’ll have to watch out for the spikes on the conveyor belt as well as the spiked wall to the left. 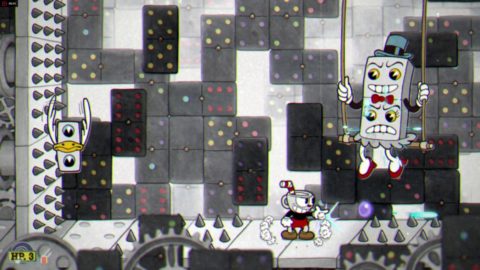 The Dominos have two attacks, Bouncing Dice that bounce up and down as they move towards you from right to left and a Flyng Domino that first moves towards the spiked wall on the left and then back along the conveyor belt. You can destroy this smaller domino.

The Chaser weapon is a good choice for this battle as you can constantly attack the boss while concentrating on your platforming skills.

This boss fight pits you against a Rabbit in a magician’s hat. There’s a floating card in the center which you can use as a platform. The Rabbit has two attacks, a Skull Circle and Suites. 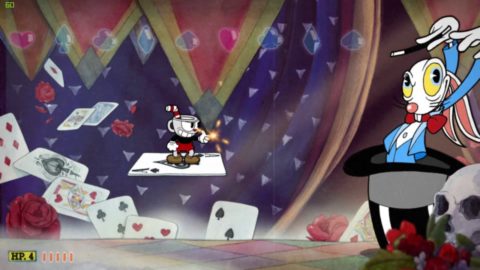 The Rabbit will spawn a Skull Circle that forms around you and shrinks inwards. There’s a gap in the circle that you need to jump or dash out of to escape being damaged. The second attack is a line of cards that spawn on one side of the screen and will fly to the other side. The only way through them is to parry the one that’s pink.

The best way to defeat the Rabbit is to stay on the central floating card as this will give you the best chance of getting past both of the his attacks. It’s also the best position to fire direct shots at the Rabbit. Once he’s taken enough damage you’ll win the fight. 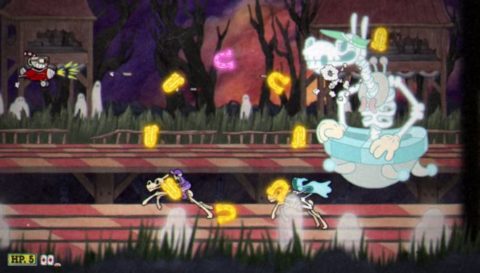 Horseshoes: The Rider will send out a large present that will explode into a circle of horseshoes that will travel across the screen. One of them will pink but the rest you’ll need to dodge.

Ghost Riders: Below you will be horse riders. You only need to worry about the ones with the glowing blue capes as when you are above them they will fly up towards you.

This is one of the easier fights as there are only two things you need to worry about. Keep firing at the boss until he’s defeated.

The Ballerina will dance across the screen over the roulette wheel. She’s quite tall so to get past her you’ll need to parry one of the pink poker chips and jump again to get over her. 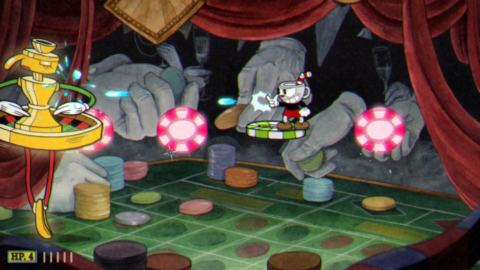 The Ballerina has a second attack. Occasionally she will stop and throw out roulette wheels into the air. They’ll drop down one-by-by and you’ll need to dodge them. Once you’ve defeated the Ballerina you’ll return back to the casino.

The 8-Ball is an easier fight than some of the others. It has a single attack in which it shoots out a laser from its mouth. It’s fairly easy to see when this is going to happen so you should be able to avoid it. 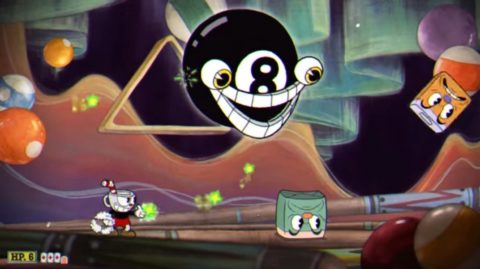 You’ll also have to watch out for the pool cues which will bounce along at the bottom of the screen. Defeat the boss and continue to the next level.

The Monkey boss fight starts you off in an area with memory cards. The boss is invulnerable while you’re here. Parry the cards in the background until you find a matching pair. When you do you’ll be transported with the boss to another area. 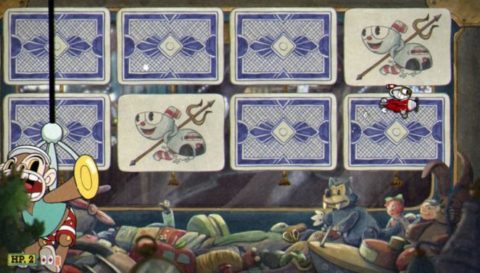 In this area the boss can be damaged but he also has a Cymbol attack. He’ll clang his cymbols together and release a wave of music notes. In a moment you’ll be taken back to the memory cards once again.

Continue this process until the Monkey has been defeated.

Once you reach the ‘Fin’ square on the board the King Dice will attack. You can now shoot his head. He only has one attack where he makes his hand walk like a man. This sends out a row of walking cards towards you. 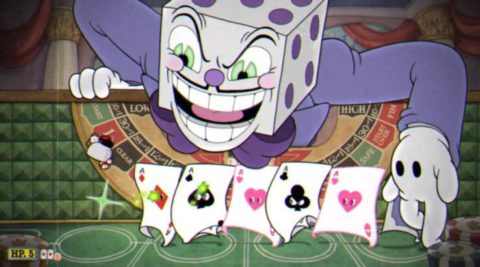 Some of the walking cards will be pink and the only way across them without taking damage is to parry your way across the pink cards. Once you’ve dealt enough damage to the King Dice boss this level will finally be over and the door to the right of the casino will open.

Next: One Hell of a Time