Objectives: Infiltrate the Palace and kill the Emperor.

Special Rules: You’ll have all of your companions with you but you can only choose one at a time to be active. You can change companions when you camp. You have no Supplies.

The Sun is a fairly long mission with lots of options for Encounters and Equipment. Try to bring a balanced deck with Food, Gold and Equipment. When you pick up the Relics on the last map you’ll be given curses so you may want some Curse Removal in your deck as well.

The Sewers – You begin in the Sewers and need to find the stairs leading out within 40 moves. To make matters worse the sewers will begin to flood from left to right as you progress. You’ll face mostly Sewer Lurkers (Corrupted) and Blocked Passages. Once you find the stairs open the hatch into the Prison.

Palace Prison – The Prison Stairs are blocked by two Locked Doors. You’ll need to confront the Jailer and persuade him, or fight him, to get the Prison Key.

When you meet the Jailer you’ll either automatically knock him out and take the Key or have to confront him. If you confront him there’s a chance he can be persuaded to give you the key, otherwise you’ll have to fight him, along with other Empire Soldiers, to get the key.

Once you have the Prison Key make your way back to the Locked Doors and go up the stairs to the courtyard.

Palace Courtyard – The Courtyard is fairly open with most of the cards already being revealed. There are 4 Empire Tokens moving about. If you land on one of them they will disappear. If they land on you you’ll have to fight. In the corners are the 4 Relics. Picking up one will give you a curse. You’ll need to find all 4 of the Relics for the Gold Token.

Once you have the Relics make your way to the Doors of Jeronym that lead to the Emperor’s Chamber.

Emperor’s Chamber – This is a small map with nothing to do except read the story. Once you reach The Final Blow encounter you’ll need to roll a 50 on 5 dice, if you have the 4 Relics. Don’t worry, you can do this over multiple attempts althrough you’ll take a bit of damage in between attempts. Once the Emperor has been killed the Royal Guard will attack. 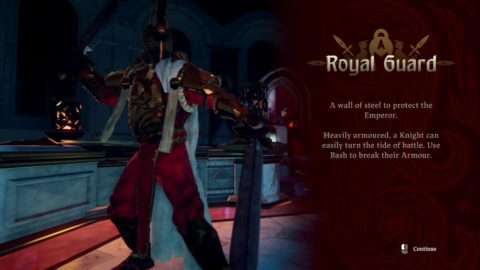 These four heavily armoured knights can cause some problems but hopefully all of your characters will be active will help you in this fight. Essentially it’s 4 vs 4. Try to remove the armour from all of the knights first. Your companions will then be able to hurt them. Once the Royal Guard have been defeated the mission will be complete.