Objective: Follow a group of thieves through the forest to reclaim your Father’s amulet. Once you have the amulet you’ll meet a new companion and travel to the Thieves Guild for a confrontation with Vignus.

The Fool is a tutorial quest that you must embark on when you begin the game. It’s a small adventure to get you used to the mechanics of the game.

As you make your way through the forest you’ll have encounters with the thieves. It’s best to use light weapons against thieves as they can more easily dodge the heavier blows. Every time you fight the band of thieves the leader will run away and hide.

At the end of the first map you’ll uncover “The Royal Road” encounter. This is where you finally meet the ‘leader’ of this band of thieves, Malaclypse, and he’ll become one of your companions.

At this point you’ll set up camp with Malaclypse and have the opportunity to customize your character. When you start on the road again Malaclypse suggests that you go with him to visit Vignus of the Thieves Guild because he owes him some money. He wants you to get gold and meet him there.

After having a few encounter you’ll come across Malaclypse again. If you’re ready, choose to go to the Graveyard to meet Vignus. It doesn’t seem to matter how much money you’ve collect, Vignus will always start a fight.

Vignus the Crazed: Vignus will throw flaming bombs and breath fire at you. You can’t defend against these attack so just roll out of the way to avoid taking any damage. 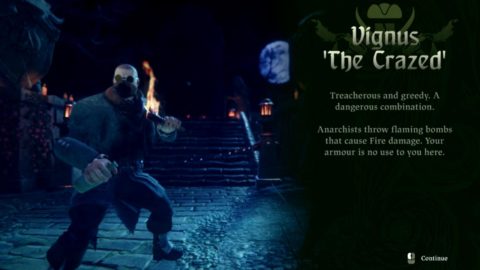 Once Vignus is defeated you’ll complete the quest and return to the map board. Completing this challenge will unlock The Magician quest.