Objective: Find 4 Relics and deliver them back to the Empire.  This is a large map with 28 encounter cards. You’ll need to take plenty of food to make it through without starving.

Special Rules: There will be 3 tokens on the map. These are the locations of the known Relics. A fourth Relic lies hidden somewhere.

You arrive in the market square and hear the town crier calling out for adventurers for the Empire. You move along to the ‘Royal Palace’ where you’re given 10 Gold to help you with the journey. The last encounter on this small map is the ‘Training Ground’ where you’re given the Cutthroat’s Blades to help you deal with Thieves. From here you’ll proceed to the next map and the main adventure.

There are three tokens on the map. These are the locations of the Relics. You don’t want to head straight for them as you’ll need to have some Gold, Fame and a good weapon before you can take the Relics. Two of the Relics will wander around the map and the third is a tent that remains in the bottom right corner. You also don’t want to get the Relics too early as each Relic will bring with it a curse which could potentially make the quest harder to win.

Merchant: The wandering salesman has one of the Relics. He’s prepared to sell it to you if you give him 40 Gold. You can try to negotiate for a better price or try to take it by force. If you want to be sure of being able to buy the Relic make sure you have 40 Gold on hand before going to meet him.

Village: The village is the Tent token in the bottom right corner of the map. You can take the Relic by claiming you’re the hero but you’ll need 15 Fame to do so. You can try to take the Relic by force but it shouldn’t be too difficult to attain 15 Fame by completing encounters around the map.

Thieves: The first time you encounter the Thieves you’ll only have 45 seconds to defeat them all. If you can do it successfully you’ll gain the third Relic. It’s best to make sure you have a good weapon available before taking them on. If you fail and they get away they’ll move to another part of the map. The next time you face them you’ll have more time to defeat them.

Once you have the three Relics the ‘Mage’s Tower’ will be placed on the map. This is where the final Relic is located. If you’ve finished exploring the map make your way to the Mage’s Tower for the final battle.

To get to the top of the tower you’ll need to complete the Wheel Gambit a few times. Hopefully you won’t take too much damage along the way. Once you reach the top you’ll find the Mage. She offers to give you the Relic and the curse that goes with it. Or you can let her keep the Relic which might make it easier to defeat her depending on the curse. If you want the Gold Token for this quest take the Cursed Relic from her and then engage her in battle.

Relic Thief Mage: This Mage has a ranged attack she’s also able to cast area of effect wards on the ground. You’ll need to avoid these while getting close to her to do damage. She only has one guard with her so the battle shouldn’t be too tough. 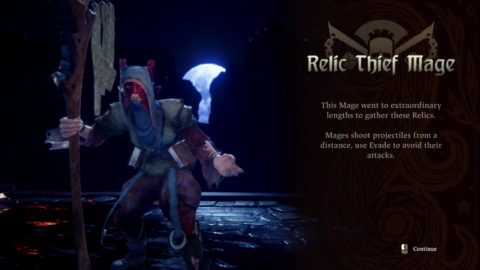 Once you’ve recovered all of the Relics and defeated the Relic Thief Mage you’ll head back to the Empire to claim your reward.