Objective: The Empire are searching for a powerful Mage hidden somewhere in the forest. You must find him before the Empire do or they will kill him.

Special Rules: The Empire have 40 days to find the Hermit. Certain encounters will speed up their search and other cards will prolong them.

Your goal as you make your way through the forest is to find The Hidden Mages. Defeat the Empire soldiers attacking them and then you can rest at their camp.  You can spend 2 Days for a Food gain card or 5 Days for an Equipment card. The more time you spend at the Mage’s camp the closer the Empire will come to finding the Hermit. Once you are done here continue on your journey to the next level.

Try to avoid the Further In encounters as they don’t have any benefit and the Empire will draw 4 Days closer to the Hermit. The Sharptooth encounter gives you the option of shuffling the cards on this level and putting the Empire 10 Days behind in their search. This encounter can be useful if you come across it fairly early on in the level. You can also ask Sharptooth for Directions, Food or Gold.

Continue exploring the forest until you come across The Hermit. If you have time to spare you can spend 5 Days with the Hermit for an Equipment card or a 10 Days to have a Mage Ally help you with the final battle. Once you are done wait for the Empire to arrive. 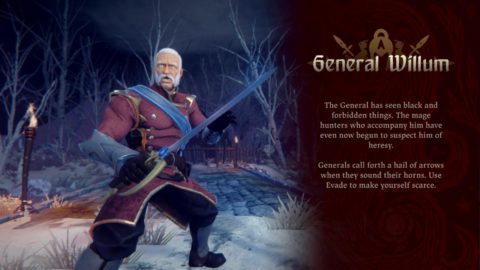 General Willum will have Musketmen and armored Empire Soldiers protecting him. He also has a horn that when blown sends down a Hail of Arrows. The only way to avoid taking damage is to move out of the way. General Willum doesn’t have any armor so he shouldn’t be too difficult to defeat.