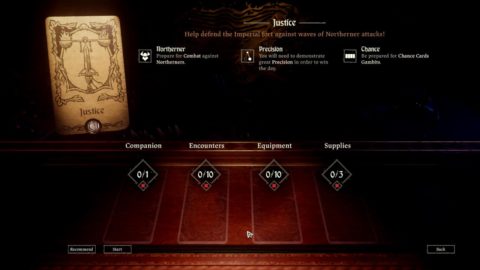 Objectives: Gather Wood and Stone and bring them back to the Imperial Fort so they can be used to build up its defences. Once the fort is well defended send out out a raiding party to deal with the Northerner.

Special Rules: Justice plays almost like a mini-game. The Imperial Fort is in the top left and the Northerners are in the bottom right. You need to gather resources from three separate locations and bring the goods back to the fort so the defences can be built. Once you have a Defence rating of 900 you can send out an army to fight the Northerners.

Tips for the Gold Token: The Justice quest throws you in the deep in without really explaining what you need to do. You must gather wood (circled in green below) and stone at the quarry (circled in blue) in order to build defences at the Empire camp. The Northerners will be sent out against the camp and each time they attack some Empire Soldiers will die. You need to complete the quest with at least 400 Soldiers remaining for the Gold Token.

The Quest: Be prepared for a long mission. You don’t need to worry about Food or Health as you’ll be given Food, up to a maximum of 5 Food, when you visit the Fort. The Imperial Healers will also heal you back up to full health each time you return. Fill your deck with cards that will help with precision and card gambits.

When you begin move once to the right to enter the Imperial Fort. The Commander tells you to go out and find Wood and Stone for him. As far as I’m aware the map is the same for every playthrough. When you leave to gather resources make sure you take Soldiers with you. The Quarry is to the right, the Light Forest to the south west and the Dense Forest near the middle of the map. 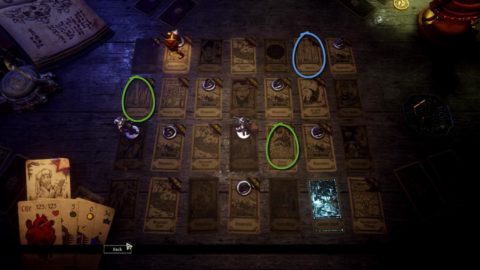 To protect the Soldiers you’ll need to build defences as quickly as possible. Your first trip should be to gather 100 Wood from the Light Forest to the south-west of the camp. Immediately come back to build your first defensive structure which should be the Wooden Spikes (30 Wood).

Here’s a list of defensive structures. You need 900 Defence before you can go out and attack the Northerner camp.

If you’re fairly efficient with your resource gathering then you should be able to complete this quest with at least 400 Soldiers remaining. 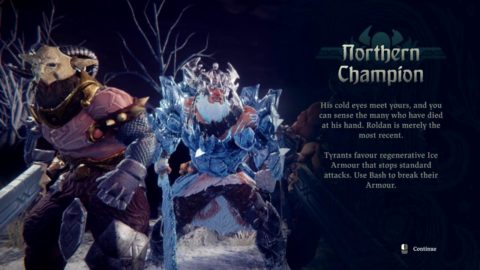 The Northern Champion has regenerative ice armor so it’s best to take out all of the other Northerners first so you can focus on just the Champion at the end. His attacks are fairly standard for a Northerner so you shouldn’t have too much trouble defeating him. Once he and his thugs have been killed the mission will be complete.

Next: The Hanged Man