One of the two main campaigns for Heroes of Might and Magic 2. After the death of Roland’s father the two sons must fight to claim the throne. You’ll mostly be playing as the three good aligned factions, the Sorceress, Wizard and Knight.

The two nearby castles are at war with each other and you. Capture the castles and defeat all enemy heroes to complete this mission. You start with a single Wizard castle and have a starting bonus of 2000 Gold, a Thunder Mace or Armored Gauntlets.

The enemies are located far to the north and will most likely attack each other rather than you. Focus your attention on one of them to get the upper hand. Once you have two castles under your control the third one should fall fairly easily.

You start in the center of this small map with two enemy castles to the south and one to the north. The enmies aren’t allied together but as you’re in the center you’ll be targeted more frequently.

The Sorceress castle is to the southeast, the Knight castle to the southwest and the Wizard castle to the north. When the scenario begins look in your castle. You’ll have 4 Genies waiting there for you. As soon as possible you’ll want to send out a small army to defeat one of the castles so you can double your income and production. The Genies will help you to quickly take out one of the enemies. From there gather up your forces and sweep over the remaining enemies to complete the scenario.

You have the option of skipping this mission but if you are successfull in rescuing the Dwarves they’ll join you instead of fighting whenever you run into them all future missions.

You start with one castle, either a Wizard, Sorceress or Knight and 5 Sorceress towns. The towns can’t be upgraded and only produce Dwarves or Battle Dwarves. Make sure you purchase the Dwarves in each of the towns to at least provide some defence from the enemy heroes.

You do start with the advantage, 5 towns to the enemies 3 towns so you shouldn’t have too much trouble taking out the towns and then moving north to finish off the Warlock castle. 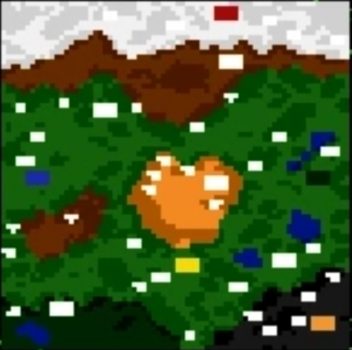 There’s plenty of Gold just to the south of your starting town so grab it all up and buy a couple more heroes. Go to the Observation Tower just to the east of your castle to find out where the Dwarves are located. Gather them up for your army and send them out with your hero to capture at least one of the enemy castles. Quickly move to the next castle and take that one out as well.

You should now have 3 castles with 2 enemies allied against you. Focus your army on one of them and then steamroll through the final castle to complete the mission.

You have the option here of turning against Roland and joining the forces of Archibald. Assuming you stay loyal to Roland you’ll have one castle to Archibald’s three.

Luckily there are quite a few Battle Dwarves that can recruit if you completed the Save the Dwarves scenario. With the help of the Dwarves you should have more than enough units to storm the three enemy castles and complete the mission.

This is a difficult scenario but at least you start with 5 Genies. You also get to choose between Mirror Image, Summon Earth Elemental or the Resurrection spells. You really do want to send out a Sorceress as early as possible to deal with the Barbarian castle on the island to the south. If you attack it early it shouldn’t have too many defences.

With the Barbarians out of the way you’ll be left with the red Necromancers to the east and the yellow Knights to the north. The Knights can be tricky to deal with if you leave them too long so your best bet is to take them out next.

The Necromancers have the high-level hero “Wyrm”. He’ll be your toughest opponent so send an army with more units then you think you’ll need. Once all castles have been captured and all enemy heroes killed or disbanded the mission will be complete.

You have the choice of completing either The Gauntlet or The Crown. It’s highly recommend to choose The Gauntlet as this will leave you with a big army for the final mission.

There are three paths to take, the Wizardwood to the west, the Knight’s Trail to the southwest and the Sorceress Forest to the south. Whatever path you take you’ll want to reach the Warlock town in the southwest before the end of the second week. This will give you a chance to upgrade it to a castle, build the Green Tower and get as many Dragons as possible.

Once you have the castle send a hero back along the path to capture the towns you missed along the way. Dragons need Sulfur but there is plenty around. There’s also a Trading Post not far from the Warlock castle. Before the end of the final week send your hero over the water to the enemy town. Whatever forces you have left after the battle will be available for the final mission.

This mission can be completed instead of The Gauntlet. You’ll need to send out your heroes to get close from the Obelisks so you can find the location of the Crown.

You don’t need to visit every Obelisk on the map. Once you have enough information to locate the general area you should be able to send out a hero or two to start digging for the artifact. The Ultimate Crown will give you +4 to all basic stats and will be available for the final mission.

If you have the Dwarven Alliance this map will be much easier. You begin with a Knight castle, Sorceress town and a wizard town. Your starting bonus is either 20 Crystals, 20 Gems or 20 Mercury. Your three opponents each have a castle on the eastern side of the map.

With the Dwarven Alliance you should be able to gather up enough Dwarves to take out at least one of the enemy castles. This will give you a foothold on the eastern side of the map and wiping out the other two enemies shouldn’t be too difficult.

If you completed The Gauntlet and have a large army of Dragons you should be able to send out a Sorceress along the river to Archibald’s castle in the first week.

Send Roland to the east and get into the boat. The Red Dragons in front of the boat should run away. Stop by Magellan’s Maps to uncover all the water areas and then get off on the other side of the lake, by the Sorceress castle. Recruit a Sorceress and have her summon a boat in the main river. Give her the entire army and send her out along the river to Archibald’s castle.

If you get to Archibald’s castle quick enough and have a large enough army you should be able to defeat him. If you don’t have the forces you’ll need to do it the slow way and clear out the rest of the map before building an army to defeat him. Once Archibald’s has been defeated the campaign will be complete.