Archibald’s campaign is the second of the two main campaigns in the game. It focuses on the evil brother as he tries to gain control of the land of Enroth after the death of his father Morglin Ironfist.

For this campaign you’ll mostly be controlling the three evil factions, the Warlocks, Necromancers and Barbarians. There are 11 missions in total although you will only be playing 9 of them in a single campaign.

You start with a single Necromancer castle in the northwest corner of the island. The quickest way to defeat the three enemy commanders is to build lthe Mage Guild, Mausoleum and then the Laboratory.

Once you build a Well you’ll be able to train 3 Bone Dragons each week. This is more than enough to capture the other 3 castles.

For this scenario you can choose betweem the Necromancer, Warlock or Barbarian factions. This is a short mission so the Barbarian faction is a good choice as they have strong early game units.

You begin with 30 Nomads. Send the first hero along the road to the east and you’ll find 2 Genie Lamps. You should be able to buy 6 to 8 Genies. Genies have a 10% chance of killing half the units in a stack that they attack. They’re one of the most powerful creatures in the game.

With the Nomads and Genies you should be able to sweep through 2 of the enemies castles. Gather some reinforcements if you need to and take out the find castle to complete the mission.

For the next mission you’ll have to choose between Necromancers and Slay the Dwarves. The reward for this mission is that you get access to a high level Necromancer for each scenario.

You begin the mission with a Warlock here with an army but no castle. You’ll need to capture a castle within 7 days or lose the mission. Quickly send your Warlock to the southeast and take over the castle. You may have enough units left over to capture a second castle.

The win condition is to capture the town of Quicksilver in the southwest. You can leave the final castle alone if you wish or capture it for the extra resources.

You can choose either this mission or Necromancers. This mission is recommended as the reward is the Ogre Alliance which means Dwarves will run away from you in battle and Ogres and Ogre Lords will join your army when you find them.

You begin with one castle of your chosen faction and 3 Sorceress towns. The towns can’t be upgraded and only produce Dwarves or Battle Dwarves. Archibald’s forces have one castle in the southwest corner and 5 Sorceress towns. Capturing the castle is the most important but the towns will give you extra income and more Dwarves.

You have the choice of staying loyal to Archibald or rebelling and turning over to Roland. Assuming you stay with this campaign you’ll start with a single castle in the northeast corner of the map. The Ogre Alliance will make this mission very easy. Ogres and Ogre Lords will join your army when you run into them. Spread the Ogre armies out across 3 heroes and send them to each of the corners to capture the blue castles. 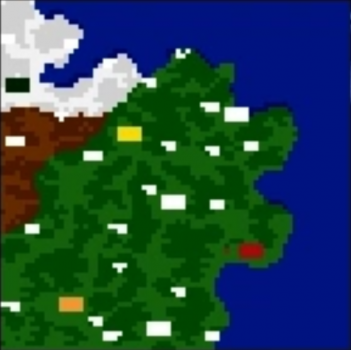 For this mission you’ll have one castle on the eastern side of the map with a Death Knight hero called Corlagon. He’s an expert necromancer and will be needed to build up an army of Skeletons. Use Corlagon to defeat the stacks of Peasants around the area. When you have a thousand or so Skeletons you’ll be ready to break through the stacks of Archers blocking your exit.

Send Corlagon out to capture the castles and then hunt down any remaining heroes to complete the scenario. The enemies are a green Wizard castle, an orange Knight castle and a yellow Knight castle.

Take the Barbarian faction for this scenario. There are 2 enemy castles but you’ll just be ignoring them. Build an Adobe right away and train Ogres. Take all the units with your hero and grab the stack of Ogres just to the north of your castle. Follow the road to the west and grab any other stacks of Ogres you find along the way.

The objective is to conquer the Country Lords who have sworn allegiance to Roland. You begin in the southern part of the map without any towns or castles. The enemy has one castle and two towns to the north.

The fastest way to win this scenario is to send your hero directly north to the castle between the towns. You’ll be able to grab some Ogre Lords and a Dragon along the way. If you’re lucky the fully upgraded castle will be empty and you can just walk in and take it. Next take the town/castle to the west and then the one to the east. Hunt down the remaining enemy heroes and conquer any castles/towns that they capture.

This map is the same as the map for the Roland Campaign. Send out your heroes to the Obelisks to get clues to the location of the Ultimate Crown. You don’t need to find all the Obelisks, just enough to work out the general location of the Artifact. Once you know roughly where it is start digging. Once you find it the mission will be complete.

You begin with the hero Corlagon in the southwest corner. The first goal is to reach the Warlock town in the northeast corner as quickly as possible. There are three paths to the town, through the Necromancer Forest, the Barbarian Fields or the Warlock Wood.

Once you capture the Warlock town build the Dragon Tower and upgrade it so you can get access to Dragons. If you have the Dragon Master reward you’ll also want to search around the map and gather up as many Dragons as you can. You should be able to build a large army of Dragons to take with you to the final battle.

You begin with a Warlock, Barbarian and Necromancer castle and a hero to go along with each of them. You’ll also start with either the Ultimate Crown from The Crown scenario or an army from the Greater Glory scenario.

If you have a large army you can take Archibald to the north immediately and follow the winding path to Rolands castle. If not you’ll need to deal with the yellow, orange and green enemies as you build up your forces. Once Roland’s castle falls the campaign will be complete.