After exploring the outer islands of the kingdom your boat is shipwrecked during a storm. You must help knight Gallavant find a way back to the mainland.

You begin on the northwestern shore with the hero Gallavant and an army of a Cyclops, 2 War Trolls, and 5 Swordsmen. Divide the War Trolls into 2 stacks and attack the Golems, then the Rocs. Try to keep the Trolls safe so none of them die. You should have enough troops to capture the nearby Barbarian castle.

Wait until the second week and send your forces down to capture the orange Barbarian castle. With two castles on your side there’s just one more to capture, the red Barbarian town. They have a strong hero and many troops so build a sizable force before you sail over to capture it. 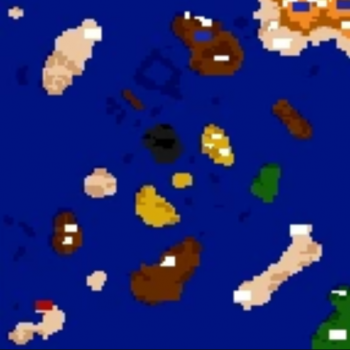 Take Basic Navigation as your starting bonus and send Gallavant by boat to the northeast. Hire a second hero to gather the resources around your starting Warlock town. Upgrade it to a castle immediately.

Continue to the northeast until you see a Warlock town owned by the blue enemy. Your starting forces should be enough to capture it. From here you should be able to hire more heroes and send them out to explore the seas. Build up to Dragons and use them to defeat Martine.

You can choose to play this scenario or Blood is Thicker. Gallavant has now returned home and discovered that his sister Drakonia has started a war against Lord Alberon. You must choose whether to side with the king or your sister.

For this mission you’ll be siding with Lord Alberon. You have one blue Knight castle and 2 Knight towns. Drakonia has one green Necromancer castle and 3 Necromancer towns. The yellow Barbarians are in the northwest and the orange Barbarians to the southeast. You will need to destroy them all to finish the campaign.

Focus on the yellow Barbarians in the northwest first as they have 2 castles. If you can take them out early you can build up a large force to sweep through the rest of the map. Next target the green heroes and then capture their castles. Lastly hunt down the orange enemy in the far southeast to complete the mission.

Lord Alberon has 3 Knight castles in the southwest and the red Sorceress has 2 castles and 2 towns in the center. All enemy forces will need to be defeated to complete the mission.

Build up all of your castles and send them out to capture the red Sorceress castles in the center of the map first. They should give you enough resources and units to continue pushing down towards Lord Alberon.