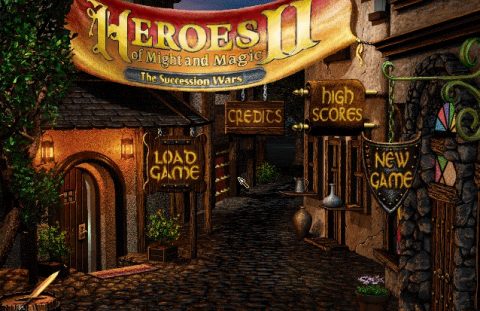 Heroes of Might and Magic 2: The Succession Wars is the second in the series and was released in 1996 for DOS, Windows and Mac. Lord Ironfist claimed victory in the first game and successfully united the continent of Enroth. On his death his two sons, Archibald and Roland, both try to claim the crown.

The factions in HOMM 2 are the Wizard, Knight, Sorceress, Necromancer, Barbarian and Warlock. The first three are the good towns and the latter three are the evil towns. Each faction has its own heroes, castles and units. There are 6 tiers of units and many units can be upgraded to a more lethal version.

Unlike the first game you do have access to Trading Posts and Marketplaces. This allows you to trade or sell resources, making it less important to find the resource you need in the overworld.

Knight – The Knight faction is composed entirely of humans and they focus more on might rather than magic. They lack flying units but have a good selection of other units with special abilities. Knight heroes begin without a spellbook but come with the Basic Ballistics and Basic Leadership skills.

Wizard – The Wizard faction has the most powerful ranged unit in the game, the Titan, which is more than a match for most Dragons. They focus more on magical abilities and Wizard heroes come with the Advanced Wisdom skill.

Sorceress – The Sorceress faction has a good selection of units to choose from with 2 flying, 2 ranged and 2 melee creatures. Sorceress heroes start with the Basic Wisdom and Advanced Navigation skills.

Warlock – The Warlock faction may seem weaker than the others at first but just wait until you start training your own Green, Red and Black Dragons. Warlock heroes come with the Basic Wisdom and Advanced Scouting Skills.

Barbarian – The Barbarian faction has tough and sturdy creatures but seems to lack some of the tougher late game units of other factions. Barbarian heroes come with the Advanced Pathfinding skill which reduces the movement penalty over rough terrain.

The Price of Loyalty Expansion