Wait for the door to open and go through. For this level you’ll be finding unique ways to get rid of the little guard droids. If you stand in front of them they’ll target you and begin shooting. You only have a limited amount of health so you want to avoid getting hit if you can. Pick up the first droid using ‘E’ and put him in the corner. 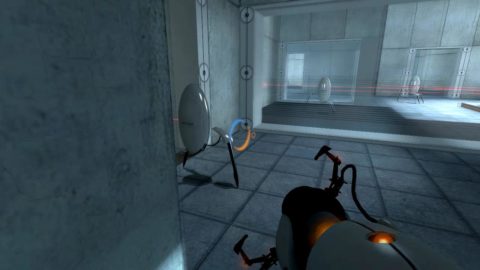 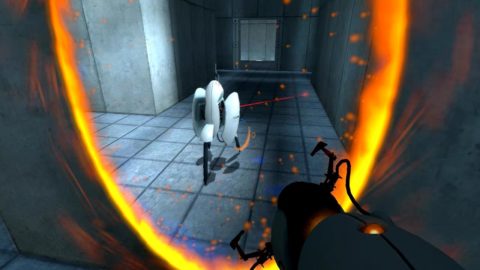 There’s another droid up the steps to the left. Quickly place a portal behind it, go through and pick it up. You can throw it over to the side or place it down next to a wall.

Continue around to a room with two droids with X’s marked on the ceiling above them. Place a portal on the X and then one on the wall next to you. Pick up a cube and drop it through the portal so that it lands on the droid. Do the same with the droid on the other side.

In the next room there are two droids beyond the glass. Place a portal behind them and then go through to tip both of them over. Opposite the droids are two rooms. One small room with cubes and a larger room with a red button and 3 droids. Place a portal above one of the droids where the X is marked on the ceiling. Pick up a cube and drop it through onto the droid. 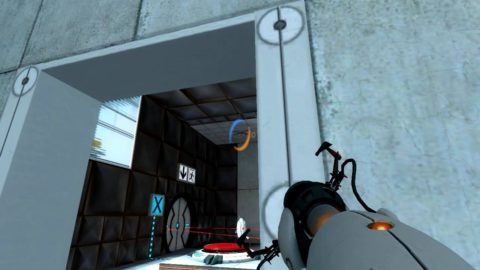 You should be able to pick up the second droid and throw it aside. The third droid is around the corner a little. You can drop a cube on it or place a portal behind it so you can knock it over. Once the droids are dealt with place a cube on the red button and stand aside because there’s another droid on the other side of a fence.