After waking from a nightmare Thrall, the far seer and orcish warchief, finds out it was not really a nightmare but a vision of the future. The prophet asks you to follow him. This first campaign is really a tutorial on learning the controls of Warcraft 3.

1) A Potion of Mana dropped by one of the murlocs

2) Take the path to the south-west just before reaching the sleeping ogre for a Potion of Healing.

3) After killing the ogre follow the path along and take the next right. This area has three stone golems and one of them will drop a Ring of Protection +1.

4) Manual of Health dropped by a troll beserker.

Follow the narrators directions and move towards the checkpoints to the north. Keep following the flags until you reach the encampment. Once there you’ll be given 3 grunts. Select Thrall and the grunts and continue moving them towards each of the checkpoints. 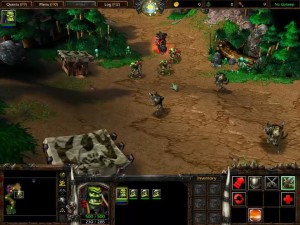 Once you come across your first gnoll the encampment will be a little further down to the south. Take out all three gnolls in the encampment. Move your grunts back if they start to take too much damage but this should be an easy fight.

Follow the path along to the south and take out the four Murloc Tiderunners in the river. One of the murlocs will drop a Potion of Mana.

Continue following the path as it winds its way around. Just before the next checkpoint you’ll have to deal with another two Murlocs.

Just before the sleeping ogre there is a path to the south west with a Potion of Healing.

Attack the ogre when he’s still sleeping and he won’t be too much of a problem. Continue following the path until you come to a t-junction. Turn right, to the south east and be prepared for a fight with stone golems.

There are three stone golems in this area. The one to the south east will drop a Ring of Protection +1. 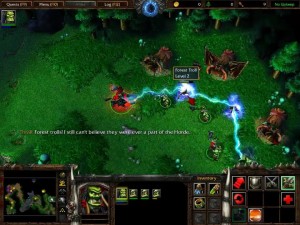 Head back to the t-junction and continue to the north west. Before reaching the next checkpoint take the path to the east into the forest troll camp.

The troll berserker will drop a Manual of Health when he dies. This increases Thrall’s maximum health by 50 points.

Go back to the main path and continue to the north until you find the Prophet.