Locate Illidan – Continue the search across the islands for Illidan.

Silence the Ghosts (Optional) – Destroy all 3 summoning pits and bring the skeletal artifact to Drak’Thul.

Naga Guardians – Kill the Naga defending the entrance to the Tomb of Sargeras.

Robe of the Magi (Intelligence +6) 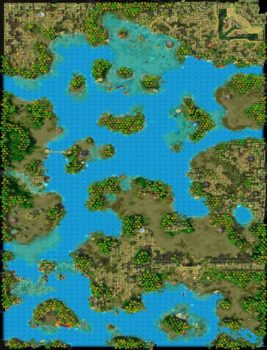 You begin with a base on the south-east island. You’ll need to buy some transport ships and sail across the ocean to find the Naga base and follow Illidan. Your Gold Mine begins with about 20,000 gold which should be plenty to get you started.

Your base will be attacked from the west and by sea from the north so make sure you have Ancient Protectors defending those positions.

To the east of the base you’ll find some Sea Giants in a pool. Kill them and then blink across to the other side to find a Pendant of Energy.

When you are ready send out of force of Huntresses and Archers with Maiev to explore this island. You’ll find the Maul of Strength on a Mur’gul Marauder in the south west part of this island.

Silence the Ghosts – head to the northern part of this island to find a hermit called Drak’thul. He’ll give you a quest to destroy the Summoning Pits and return an artifact to him. The minimap will show the location of the Summoning Pits if you haven’t explored there already.

Go to the north of the island and purchase all of the ships. Jump on the transport ships and head to the island on the eastern side of the map. Destroy the 3 Summoning Pits. The last one will have the Skeletal Artifact. Bring it back to Dark’thul to complete the quest. He will give you the Robe of the Magi (Intelligence +6).

The Periapt of Vitality can be found on a small island in the south west but you’ll have to kill a Hydra to get it.

On the western island you’ll find the Red Naga base. Take a medium-sized force of Huntresses, Archers and a couple of Glaive Throwers to deal with it. Once you’ve destroyed it you’ll be able to send over some Wisps and take over their Gold Mine. To the north of the red base you’ll encounter some Jungle Stalkers. One of them will drop the Claws of Attack +6.

Locate Illidan – The Purple Base is in the north and this is where you’ll find Illidan. Use the same forces that you used to destroy the Red Base and just transport them up to the north. Once you take out the Purple Naga Base Illidan will escape into the Tomb of Sargeras.

Naga Guardians – Bash through the Ruined Gate and battle with the Naga on the other side until they have all been defeated. You should be easily able to wipe them out with Maive and a dozen or so units.

Next – Chapter 3: The Tomb of Sargeras

Back – Warcraft 3: The Frozen Throne Walkthrough