The Ruins of Dalaran

Spell of Destruction – Destroy the Summoners before they finish the spell. Only magical attacks will harm the Summoners such as those from Chimaeras.

Save the Paladin (Optional) – A hero is capture in a cell in the north east of the map. 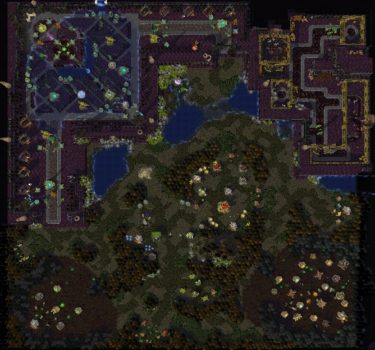 The Ruins of Dalaran Walkthrough

The first thing you want to do is protect your base as you will be attacked primarily from the north and western sides. The goal will be to build 2 Chimaera Roosts so you can get your Chimaeras out quick enough before the 30 minute timer runs out. There is a second gold mine on the eastern side of the map that you’ll want to entangle for extra gold.

Save the Paladin – While this quest is optional it’s highly recommended that you do it because the paladin will join your party and he has powerful healing spells. Send out a fairly tough force including Maiev, the Chimaera, Mountain Giant and whoever else you can muster to take out the Naga in the dungeon to the north east. In the far corner you’ll find Magroth the Defender. He has Holy Light and Divine Shield.

Now that you have Magroth leave the ruins and take out the Trolls guarding the gold mine to the south. Send some Wisps to take over this mine and start generating gold.

Spell of Destruction – Build 2 Chimaera Roosts and make sure you have all the upgrades for Chimaeras. You’ll want 10 to 12 Chimaeras to send out as a strike force into Illidan’s base.

There are a few paths of attack but the one I found the best was heading straight through the entrance at the northern side of the map, just past the Fountain of Healing. You can always come back to the fountain to rest up.

Fight your way into the ruins and then head west towards the main section of the Naga base. Send out a small strike force first to destroy a few of their buildings and cause some havoc. When the Naga are sufficiently distracted send all your Chimaeras straight to the Summoners in the middle. They should only take a second to kill each of the four Summoners. Ultimately all your troops will die but as long as you kill the Summoners before they finish casting the spell you’ll complete the mission.

Next: The Brothers Stormrage