The Tomb of Sargeras

The Search for Illidan – The search continues. Maiev must survive.

Barriers (Optional) – Destroy the rock barriers so your Night Elf friends can join your party.

The Tomb of Sargeras – Bring Maiev back to the tomb entrance. 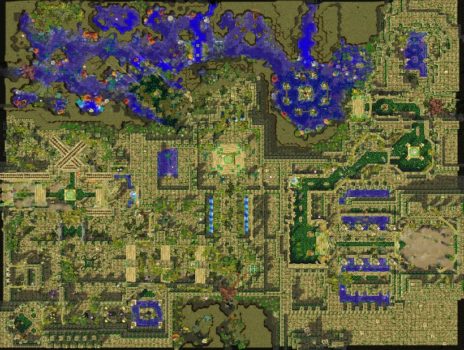 The Tomb of Sargeras Walkthrough

You enter the Tomb of Sargeras on the western side with Maiev, Naida, 3 Archers and a Huntress. There are many items to find. The most important being the 10 pieces of the Shadow Orb which will give you +10 attack damage, +3 Armor and increased health regeneration if you have all of the pieces.

Now go through the eastern arch to a fountain. Use Maiev’s Blink ability to blink into the little garden to the north with a Tome of Intelligence +2.

Head to the south for a battle with two Tomb Guardians. One of them will drop the Mantle of Intelligence +3. If you work your way towards the south west of the map you’ll find an area with a Level 7 Pit Lord and a Manual of Health +50.

Barriers – As you move through the dungeon you’ll come across a number of rock barriers. Break them to allow other Night Elves to join you on your quest.

The Shadow Orb – Hidden around the dungeon are 10 pieces of a Shadow Orb. Finding all 10 pieces will give you +10 attack damage, +3 armour and increase your health regeneration. Trying to explain the location of each piece would take some time so I’ll post a video showing you each location below.

At the eastern side of the map, after breaking through a Massive Ruined Gate you’ll find Illidan Stormrage. He already has found the Eye of Sargeras and uses its power to trap you in the dungeon.

The Tomb of Sargeras – The other elves don’t have the Blink ability and so will be trapped in the tomb forever. Bring Maiev back to the tomb entrance. You’ll need to Blink past numerous creatures but you can pick up some buffs along the way. Once you reach the entrance the mission will be complete.

Next: Chapter 4: Wrath of the Betrayer