Dungeon of the La Valettes

After going over the events of the day with Roche he’ll ask you what you would do if you were free. If you respond by saying that you’ll hunt for the killer he’ll give you the key to the shackles so you can free yourself later.

During the conversation you’ll recover some of your memory from the past. This is part the Returning Memories quest and continues throughout the next 3 chapters. Your goal is to break out of the Dungeon and reach the Docks where you’ll meet Triss. 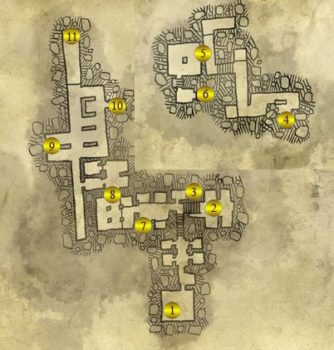 Hanging up in chains in the Cell (#1) you have two options, either provoke the Guard or free yourself immediately. If you free yourself you’ll have to fight both of them so it’s better to provoke a Guard a lure him into your cell first. Geralt will take him down and then you’ll need to fist fight the second Guard.

To escape the dungeon you can either brute force your way out or try the stealthy approach. Right-click on the torches as you pass them to turn them off, making it harder for Guards to spot you. You can sneak up to the Guards and knock them out from behind using Right-click.

Once you reach the top of the stairs there are two paths to take, right up another flight of stairs or left to the other prison cells.

Climb up at (#5) and you’ll hear a prisoner being tortured. It will be Aryan La Valette if you saved him or his mother, Mary Louisa La Valette, if you killed him. The Interrogator is trying to force them to sign a paper. Kill the Interrogator and the Scribe and discuss with them a plan to escape.

If you rescue Aryan he’ll tell you to clear out the Guards and then come back to help him escape. He’ll tell you about a Secret Passage. Go through it and take him to the Oil Room (#9). Aryan will start a fire so make your escape by heading to the Docks (#11).

If you rescue Louisa and man called Shilard will interrupt the conversations. Louisa will tell him to distract the Guards so the two of you can escape. After Shilard sends the Guards away you’ll be able to escape to the Docks (#11).

If you take the left path you’ll need to silence the Noisy Prisoner (#7) by Left-clicking when the option appears. There should be a Guard near to the Locked Door (#8), knock him out or kill him and search his body to find the Key.

In the next room you’ll either see Aryan knocking out two Guards or Marie Louise speaking with the Niflgaardian Ambassador, Shilard.

If you see Aryan then you’ll need to clear the way by dealing with all the other Guards in the area. When you come back for him take him to the Oil Room (#9) where he’ll start a fire. Leave him and head to the Docks (#11).

If you killed Aryan then Mary Louise will be here with Shilard. Follow them to the Small Room (#10) where they’ll chat about politics. After a while Shilard will agree to help her escape and distract the Guards. Make your way with her to the Docks (#11).

Once you reach the Docks you’ll be approached by Newboy if you told him that the Amulet wouldn’t protect him. To offer his thanks he’ll give you a book About Dragons and distract the Guards so you can make it to the pier. If you take too long the Guards will notice you and you’ll have to fight them along with Newboy.

If you told Newboy the Amulet would protect him then you’ll find his corpse near to the pier. Search his body and pick up the Talisman. This will continue a quest, Melitele’s Heart, in Chapter 1.

Loot any crates that you find and then head out to the end of the pier to meet Triss and Roche. You’ll take the boat to a nearby town called Flotsam, which is where you’ll begin the next chapter.