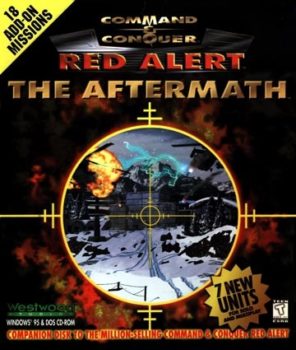 Aftermath is the second expansion for Command and Conquer: Red Alert. It comes with 18 new missions, 9 for the Allies and 9 for the Soviets. Aftermath was released in 1997 and features new units for both sides.

The Allies have access to the Field Mechanic to repair vehicles out in the field, the Chrono Tank which can transport itself and the Phases Transport which can turn invisible.

The Soviets have the M.A.D Tank which explodes in a shockwave that destroys nearby buildings and vehicles, the Missile Sub which can attack units on land, the Tesla Tank with long range blasts of electricity and the Shock Troopers that shoot Tesla bolts and can’t be run over by tanks. Both sides also have access to the Demolition Truck which holds a nuclear warhead, causing massive damage when it explodes.