Memory 2 is broken down into two sections. The first is finding the traitors in Maysaf and the second is the assassination of the Black Market merchant in Damascus.

At the beginning of this memory you’ll be demoted to a novice and will lose most of your abilities. Someone opened the gates for the Templars and you must find out who was involved.

Head out of the Fortress and follow the GPS to the next location where you’ll perform an eavesdrop. Find your target and sit on a bench nearby. Press F when you’re looking at your target and then press E to listen in on the conversation. 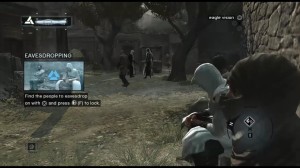 After the investigation you’ll need to head to the Basket Weaver. He’ll be about 80 meters away to the west. Find your target and press F to lock on. Sneak up behind him and press and hold Shift to pickpocket.

The last part of this section is to find Masun and to interrogate him. Masun is a fanatic, you’ll find him preaching to the passers by. 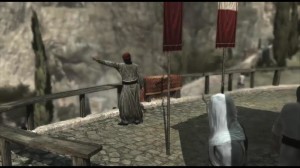 Wait for him to stop talking and then follow behind him to a secluded spot. Eventually he’ll walk into a rear courtyard. Punch him until he starts talking. He serves the Templars and tells you of their plan to open the gate.

After taking him to Al Mualim you’ll be given your sword and hidden blade back. Al Mualim will give you the task of hunting down nine people who are a threat to the brotherhood. The first is Tamir, the Black Market merchant in Damascus.

As you  leave the fortress you’re given the chance to practice your fighting skills in the courtyard. Head out the gates of the village and jump on one of the horses.

Tamir is in Damascus. It’s a fairly long journey so you may find it quicker just to gallop past all of the soldiers rather than trying to quietly blend in. Follow your GPS and the signs until you reach the large city. 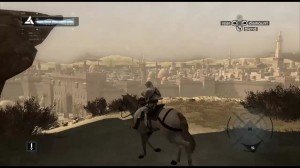 Outside of the gates a citizen is being harassed by soldiers. Kill the soldiers and speak with him to receive his gratitude. Inside the city are more citizens that need to be saved. The more you save the more the citizens will rise up against the Templars. 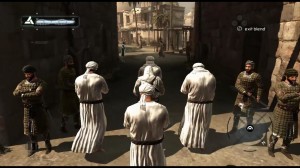 Things to do in the Poor District of Damascus

The first thing you’ll want to do is head to the Assassin’s Bureau and talk to the leader there. He’ll tell you what needs to be done. You’ll need to complete at least two investigations before coming back and speaking with him. To complete all objectives rescue all of the citizens and find all of the view points as well.

There are 6 investigations in the Poor District of Damascus. You’ll need to complete two of them before heading back to the Assassin’s Bureau.

Once you have the information you need return to the Bureau and speak with the leader again. He’ll give you the go ahead to assassinate Tamir. Once you head out of the Bureau he will be shown on your map. Make your way over to him by following the rooftops. Jump down once you get to the market and listen to his speech. 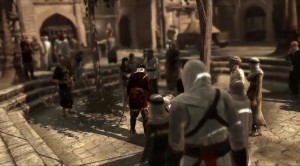 Once he’s finished talking immediately go into blend mode by pressing Space. Follow along behind him and quickly assassinate him. Sprint out of there or climb the walls to escape the guards and find a safe place to blend in.

Head back to the Assassin Bureau leader to complete the memory. Continue on to Memory 3.