Climb the stairs out of the basement and then up the stairs to the top level of the mansion. You’ll be in a hall with a number of doors. Walk to the right and enter the 3rd door, the last one. Pick up the wine bottle. 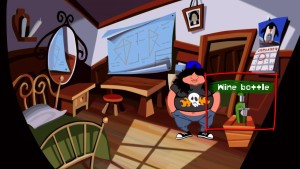 Go back down the stairs and enter the Main Hall next to the mummy. Inside you’ll find a shivering John Hancock and two others sitting to the right. Just ignore them for now. Instead enter through the swinging door. Pick up the spaghetti and the oil. 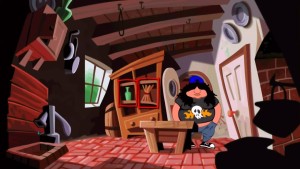 Open the white door to the right and go inside. Pick up the bucket and open the cabinet. Inside the cabinet you’ll see a brush. Pick it up as well. 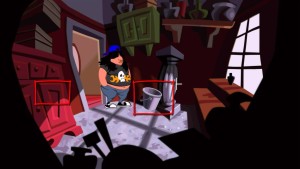 Head back out the swinging door. You’ll see John Hancock, Thomas Jefferson and George Washington to the right. Have a chat with them if you like. Give the bottle of wine to Thomas Jefferson. He’ll tell you that he will bury it in the time capsule tonight. 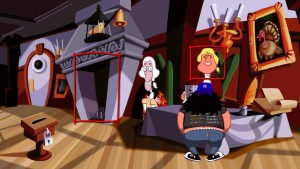 Click on the fireplace to climb up the chimney. On top of the roof climb in the first window on  your right. You’ll be in a bedroom. Pick up the red paint, open the trapdoor and then go down. You’ll be in a hallway with an amazing talking horse! Just ignore him for now, head down the stairway at the end and go outside the house. 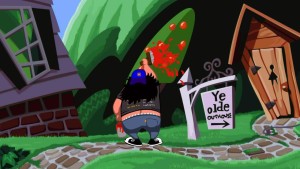 If you’ve already spoken with George Washington you’ll know he only likes cutting down cherry trees. Go inside the house, into the main hall and speak with him again. Ask him about cherry trees and challenge him to cut one down. He’ll spot the painted kumquat tree outside and go chop it down. This is the same tree that Laverne is stuck on so in the future she’ll fall down and be free to walk around.

Speak with the purple tentacle guard and tell him you don’t feel so good. He’ll take you to see the doctor. The doc will see that there’s nothing wrong with you and leave. Pick up the tentacle chart and then head out the door. 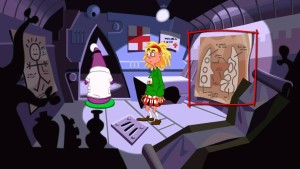 There are three strange ladies sitting on a seat here. Try to open up the grandfather clock and the tentacle will send you back to the ‘kennel’.

Once again talk with the tentacle guard. This time tell him you need to go to the bathroom. He’ll take you outside for a walk. Follow the path to the right to the Chron-O-John and in your inventory give the tentacle chart to Hoagie.

Hoagie will find the tentacle chart in the Chron-O-John. Head into the house. Go up the stairs and enter the second door where you’ll find Betsy Ross working away at a sewing machine. Use the tentacle chart with the patterns on the desk.

You’ll see a cut-scene where a future flag is replaced with a tentacle shaped flag.

It’s time to return to the present. With Bernard go up the stairs to the first level and open the second (middle) door with the R on it. The door is chained shut but you can reach your hand through and pick up the disappearing ink from the small table by the door. 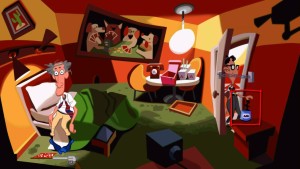 Go to the last door with F on it and open it. Inside you’ll find green tentacle. Pick up the video tape to the left of the door. 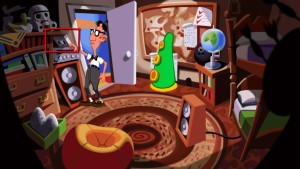 Go back out to the hall and then up the stairway at the end. Continue past the two doors and up the next stairway to the Attic. Open the door to the right and go into the small bedroom. Climb out the window and pick up the crank. 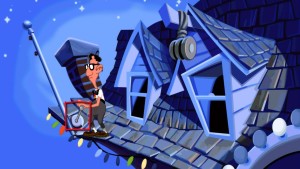 Open your inventory and give the crank to Laverne.

Now that Laverne has the crank in her inventory follow the path back to the tentacle guy who’ll take you inside. In the ‘kennel’ speak with the tentacle guard and tell him that you don’t feel so good. He’ll put you back in the doctors office.

Walk out of the door and then head out the next door to the north. Click on the fireplace to climb up it. the fireplace in the future looks just like another doorway. On top of the roof use the crank on the crank box and then grab the flag which is really a tentacle costume. 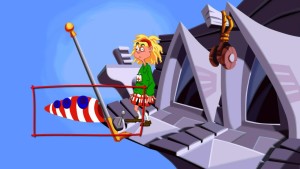 Open your inventory and use the costume. Laverne will wear it to disguise herself as a tentacle. Climb back down the chimney and go through the door to the left where the three ladies are sitting.

Try to get to the grandfather clock and the tentacle will stop you once more. He’ll say that he’s on guard unless he has to chase down some humans. You can get up the stairs however so push past the tentacle and walk up the stairs to the first level.

Enter the first room with a W next to the door and wait here. This is the room with the time capsule.

Open your inventory and send the can-opener to Laverne.

Use the can-opener on the time capsule and take out the vinegar (the wine has turned to vinegar over hundreds of years). 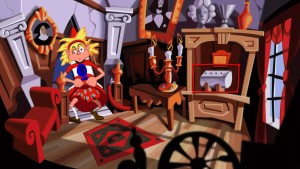 Open your inventory and send the vinegar to Hoagie.

Climb in the windows and go through the door to the right. Climb down the ladder and down the staircase once more to the first level hall. Enter the room marked with an R. Give the letter to Dwayne. He gets excited about the letter and runs out of the room. 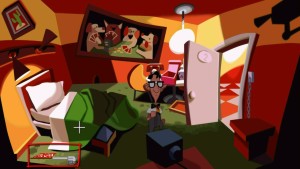 Go out and walk down the stairs to the ground floor. Enter the doors with the Welcome sign above them. Looks like someone was having a party in here! There’s a cigar salesmen. He has a cigar lighter gun on the table next to him. Replace the cigar lighter gun with the flag gun and talk to the salesman. Say “Nice cigars” and when he asks you if you want one say “Sure, lay one of those Havanan babies on me.” His cigar lighter won’t work and you’ll get to keep the exploding cigar.

Open the grating and stand the other side of the fake teeth. The teeth will run away from you and fall in the grating. Pick up the trapped teeth. Give the exploding cigar , chattering teeth and the cigar lighter gun to Hoagie.

Go into the main hall and give the exploding cigar to George Washington. The cigar will explode and he’ll lose his teeth. Use chattering teeth with George Washington. Eventually the fire is lit allowing you to pick up the blanket that John Hancock was using. 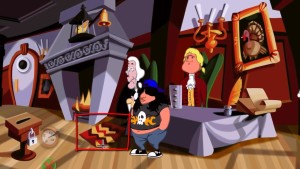 Walk up the stairs to the first floor, up once more to the upper hall and up the staircase to the bedroom attic. Climb out the window and use the blanket on the chimney. The three men will think there’s a fire and jump out the window.

Continue to the next part to find out how to restore power to Hoagie’s capsule (Part 4).