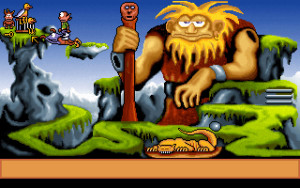 Welcome to a Gobliins 2 walkthrough. Once again the Kingdom of Angoulafre is in despair. The prince  has been kidnapped by a powerful demon called Amoniak and taken to a far off land. Only two Gobliiins are actually crazy enough to go on this adventure and rescue the prince, Fingus and Winkle.

You will travel with these two Gobliiins to seven different worlds in search of the prince. Each world stranger than the last.

Gobliins 2 is the sequel to the highly successful Gobliiins video game. It was released in 1992 by Coktel Vision for DOS, Atari ST and Amiga.

World 1: The Village – The Gobliins begin their noble quest in the local village. Find your way past these illogical and wacky puzzles.

World 2: Outside the Castle – After making out of the village the Gobliins are stopped in their tracks by a large trench going all around the castle.

World 3: The Castle – Having made their way into the castle the Gobliins must find the blacksmith and help him make a key so that they can escape.

World 4: Underwater Wreckage – As the Gobliins descend the well they find themselves on an underwater wreck.

World 5: Throne Room – Face the false king and rescue the Prince Buffoon. But is the adventure over all ready?

World 6: The Village – Head through the village and take the Prince back to his home.

World 7: Saving the Prince – Save the Prince Buffoon from his madness and face your final enemy.