Leave the town through the little red door to the west. Go east, south, south and east back to the stag. Talk to him and he’ll tell you about Feldspar the rock spirit. 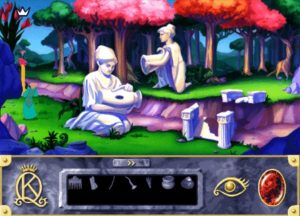 Pour the nectar in the pot into the hole in the jar that the statue is holding. The river will start flowing again. The stag will return, take a drink of water and turn into Attis.

Go west and knock on the door of the house to speak with Dr. Cadaver. Leave the house, go east and use the rope lift into the cubby house. Take the bone that the mummy’s holding. Walk west, west and north. Throw the bone to the dog. Talk to the dog and he’ll give you the Horseman’s medal.

Walk south and give the Horseman’s medal to the lady in the black cloak. Have a look at the tomb door. It’s locked.

Walk east and east to the kid’s cubby house. The kids drop a firecracker. Pick it up and head back west and west to the tomb. You will explode a few times along the way. Just keep going from where you exploded and after a few tries you’ll reach the tomb.

Exit the tomb. stand near to the road and when the horseman approaches give him the Horseman’s head. 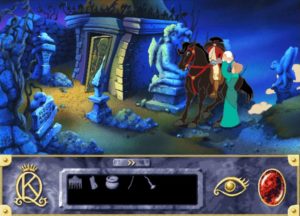 He’ll let you ride on his horse and give you a flute to call him at will. The horse will take you to Etheria.

Walk to the east, east and all the way north to the top of the path. First climb onto the tree and then grab the ambrosia. Walk south, south and east. Give the ambrosia to the fairies and they’ll sing you a tune (which didn’t work on my computer because the game crashed at that point). You’ll need to repeat the tune on a harp later.

Walk to the north and you’ll see a harp. Play the tune that the fairies gave you. From left to right pluck the strings in this order, 1 – 5 – 6 – 4. Now click on the crystal ball to be teleported to the Lady Fates. Speak with the ladies. When you are finished go south, west and take the south-east rainbow back down.

Place the ambrosia into the statue’s cornucopia (horn of plenty). Look inside the cornucopia to find a pomegranate.

Walk west, speak with Attis and place the pomegranate in the wound of the tree. Ceres will be transformed into a woman.

Walk east and grab another pomegranate from the cornucopia. Play the flute to call the horse and be taken back to Etheria.

Take the south-western rainbow. Go north through the gate, west, and then enter the Doctor’s house. Click on the couch so that you can sleep and have a dream. Watch the cut-scene and then you’ll wake up back in the house.

Exit the house. Play the flute and be taken back to Etheria. Go east and north to the harp. Play the harp (1 – 5 – 6 – 4) and click on the crystal ball. Speak with the Ladies again and tell them about Mab. Go south, west and take the south-eastern rainbow. Go west and speak with Ceres.

Play the flute to be taken back to Etheria. Go east and north. Play the harp once more and speak with the Ladies. They’ll give you a dream catcher.

Walk south, east and north up the path. Try to enter the cave and use the dream catcher on the monster and go inside. Try to speak with the man and then show him the dream catcher. He’ll give you a tapestry of dreams.

Go south all the way down the path, west and down the south-western rainbow. Walk east and go north to the backyard. If the dog is barking leave and come back again until you don’t hear the dog. Enter through the hole at the back of the house.

Go back down under the floorboard until Malicia leaves. Get up and go to the lamp in the bottom left corner. Take out the crystal shaft being used as a light. 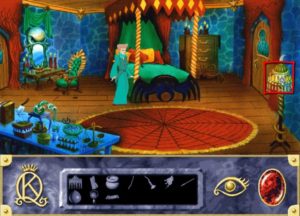 Leave the house through the floorboard. Exit the backyard and use the flute to call the horse. Take the south-eastern rainbow.

Go south, south through the cave and all the way to the east to the temple. Enter the temple and hold the crystal shaft up to the light.

Use the tapestry of dreams to be taken to the dream world. When the nightmares attack you use the dream catcher on them.

Walk to the south, enter the temple and use the crystal shaft on the ice. Mab will give you a magic bridle to catch the wind horse.

Walk north up the path and hide behind the cave. When you see the wind horse use the magic bridle to catch it. After a short cut-scene the chapter will end.