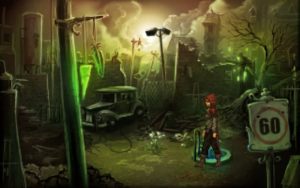 Once you climb up the ladder click on the wood pile to scavenge it and take a Plank. Exit the screen to the left. You’ll be given a map with destinations to choose from. Click on the one to the right, the Ministry of Energy.

Click on the door to enter the Ministry of Energy. Head down the passage to the left past the two guards. They will take your Crossbow before letting you through to the tower.

Get into the elevator and at the top speak to the Soothsayer. He’ll give you a Lottery Ticket for completing the reactor job. Head up the stairs and speak with Tiberius. After the conversation head back down, pick up your Crossbow from the guards and exit the building.

Exit the screen to the map and visit the Market District East.

Speak to everyone here but unfortunately no-one knows anything about Danton. Go into the market alley and speak with Clem. 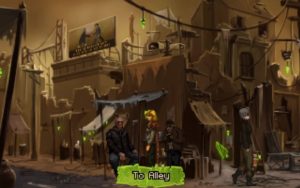 Ask Clem about Danton and then show him the Letter for Danton. He’ll say he doesn’t know anything about it but as you leave the alley tells you to “brush up on your calligraphy”. It sounds a little bit cryptic.

Denby wants to draw a picture using the chalk he stole from a classroom. Tell him to draw Tiberius with stink lines. Denby will get inspired and start drawing. Talk to Denby again. It seems he’s worried about Tiberius’ guards seeing him. Use the Crossbow on the bell. Denby will get scared and run off dropping the chalk. Pick up the Chalk. 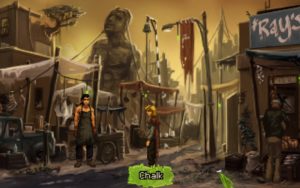 Go back to the alley. Examine the letter to Danton and you’ll see a calligraphy letter M in the wax seal. Read the calligraphy book and have a look at how to draw a M.

Look at the chalkboard and draw the M with your chalk. The result should look like this. 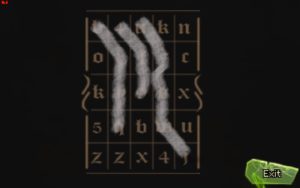 Have a look at the letters which aren’t covered up. They spell ‘knock x 5 buzz x 4’. Knock on the door five times and use the buzzer four times. The door will unlock. Open the door and go down the stairs.

Show the man the Letter. Danton will appear and ask you where you got the letter from. Tell her the that you got it from a technician. When Danton leaves speak with Bruce.

Head back out to the market. Amy will have an episode with the green lung. A man will see you in distress and talk to you about the reaper.

Exit the market and go back to the Ministry of Energy.

Head up the tower and speak with Tiberius. He’ll give you a job to spy on Danton’s group.

Go back to the Market District West and enter the alley. Enter the door and tell Bruce you want to speak with Danton. Tell her that you were asked by Tiberius to spy on them. She’ll accept you as a double-agent and give you the task of helping Gordon and Gus who are also working with Danton.

Next Part: Gordon and Gus